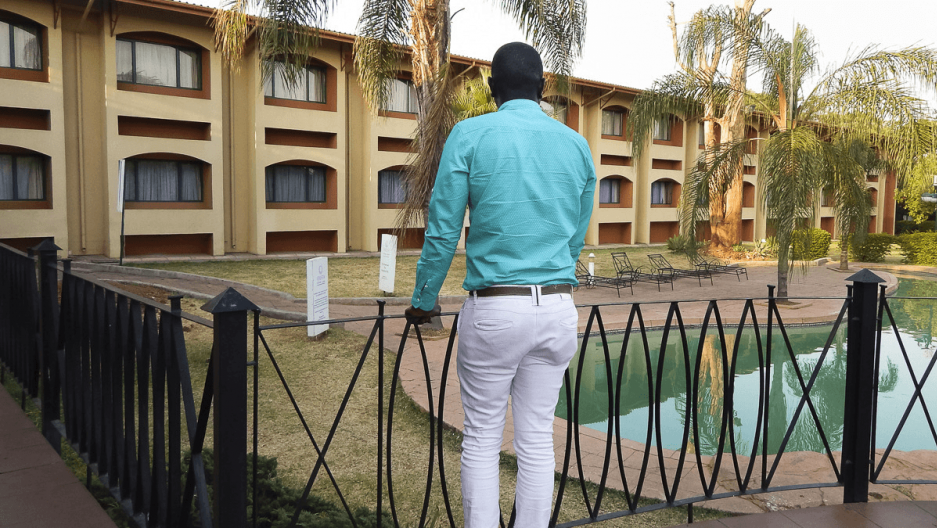 Chanda, a gay man, says he tried three times to kill himself before he learned to accept himself. Suicide is common in Zambia’s LGBTQ community, as homosexuality is illegal and punishable by prison time.

Chanda is calm as he recounts his battles against homophobia.

“It’s a jungle we live in. We are always hunted,” he says. “If I had a choice, why would I choose such a hostile life?”

Chanda, 34, who asked to remain anonymous for fear of being arrested, says he’s attempted suicide three times because he couldn’t cope with the rejection and harassment he endured from his family and community.

It’s a crime to be a homosexual here. Many people in Zambia’s lesbian, gay, bisexual and transgender community, who face potential imprisonment according to local law, say it’s a struggle to cope with the emotional trauma that comes with living in a place where one’s most personal practices or identity is regularly attacked. Suicide is common, they say, and so is alcohol and drug abuse.

But because the LGBTQ community’s existence isn’t legal in Zambia, help for its members is often unavailable.

“No one wants to fund LBGTI programs because they are deemed illegal,” says Kennedy Palangwa, a program officer at ZANERLA+. “The secrecy surrounding LGBTI hampers everything.”

ZANERLA+ stands for Zambia Network of Religious Leaders Living With Or Personally Affected By HIV and AIDS. It creates support groups within religious circles to teach about sexual minorities and urge people to accept them into their families and communities. The goal is to reduce emotional trauma for sexual minorities and reduce the number of suicides and rates of substance abuse in that community, he says.

Palangwa says his organization wants to hire professional therapists to treat LGBTQ people who have mental health issues, but it doesn’t have the money to do so.

It’s often difficult to even broach the topic of sexual minorities, says Mamoletsane Khati, the regional program manager of health and development at Panos Institute Southern Africa, a regional nonprofit that supports poor and marginalized people.

Many LGBTQ people suffer emotional trauma because the communities in which they live don’t believe that they are human beings that deserve human rights, Khati says. Educating those communities is a difficult task, she says.

“You have to start by talking about other marginalized communities like women and children, then slowly bring in the LGBTI communities,” Khati says. “Even with such tact, sometimes it does not go well with some people the moment you mention LGBTI.”

“Here, suicide is escalated because the environment that the sexual minority live in Zambia is toxic,” says Scott Robertson, a therapist who has worked with that community in Zambia for 15 years.

There are no official statistics about the mental health of Zambia’s LGBTQ community because the government doesn’t legally recognize its existence, but Robertson’s experience matches the data culled from other countries, even in places where it’s not illegal to be gay.

The National Institutes of Health, a US government organization, notes that LGBTQ adults are at higher risk of depression, anxiety disorders and suicide attempts than heterosexual adults.

Chanda says he first attempted suicide when he was 15 years old, when he discovered that he was gay but couldn’t talk with anyone about it. His parents found him trying to drown himself in a bathtub. Three years later, after hearing a priest preach hate and condemnation for gay people, Chanda began to pray fervently that his sexual orientation would change. Prayer didn’t work, he says, so he tried again to take his own life again, this time by consuming bleach.

The last attempt was at university, he says, after his room was nearly set on fire at night by students who discovered that he was gay. The students had doused it with kerosene and were preparing to set it alight when Chanda’s roommates stopped them.

“My roommate defended me, but I felt I did not deserve to live, that was my lowest moment,” he says. “How could I carry on with a life of rejection?”

The next morning, Chanda took as many pills, including ordinary painkillers, as he could find. His roommate found him and took him to a hospital.

Over time, Chanda found the help he needed in an older friend, who is not part of the LGBTQ community, who supported him.

Now, he leads a community organization that helps LGBTQ people deal with emotional trauma. He asked that GPJ not publish the name of his organization because he worries that it will be targeted by anti-gay activists.

Mpundu, 23, who asked to remain anonymous, is among those whom Chanda is helping. Mpundu says he tried to kill himself by taking insecticide after his family disowned him and a relationship with another man failed.

“I felt all alone, I felt life was not worth living when everyone including my partner had rejected me,” he says.

People he lived with saved him by rushing him to a health clinic, he says.

It was isolation that drove Shane, a 24-year-old bisexual man, to consider attempting suicide. Shane, who asked to remain anonymous, says he was rejected by his family. Meeting others like himself helped him begin the recovery process, he says.

“I had suicidal thoughts  I could not understand myself until I met another bisexual man through social media who had just lost a partner through suicide,” Shane says. “We began talking and he helped me understand myself.”

Robertson, the therapist, says a critical step to improving mental health among sexual minorities is to educate their communities to accept them.

“We have to deal with what is causing the problem first,” says Robertson.

Chandaagrees. It has taken him many years to accept himself, he says.

“How about my family members, the people that do not understand my struggles? It is a battle that cannot be won overnight, but with effort, it will be won,” he says.

Prudence Phiri of GPJ reported from Lusaka, Zambia. All interviews were done in English.