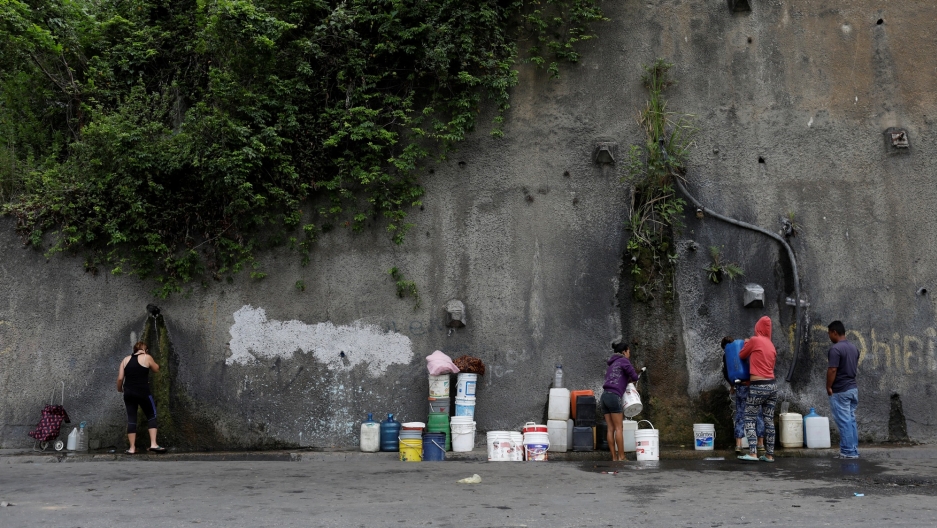 People fill containers with water coming from a mountain, in a road at Plan de Manzano slum in Caracas, Venezuela.

The Central Venezuelan University hospital, once a Latin American leader, most bathrooms are closed. Patients fill jugs from a tiny tap on the ground floor that sometimes has a trickle of water. Operations are postponed or canceled.

"I have gone to the operation bloc and opened the tap to wash my hands, as you must do before a surgery, and nothing comes out," said gynecologist Lina Figueria.

Water cuts are the latest addition to a long list of woes for Venezuelans hurting from a fifth year of an economic crisis that has sparked malnutrition, hyperinflation and emigration.

Malfunctions in the capital's water network due to lack of maintenance have taken a turn for the worst in recent months, depriving many in this city of 3 million people of regular running water.

Caracas is nestled in a verdant valley perched at around 2,953 feet and its water is pumped from much lower sources. But the pumps have not been maintained, spare parts are scarce and President Nicolas Maduro's administration is short of cash.

"For many years this deterioration process was not noticeable. But now the water transport systems are very damaged," said Jose De Viana, former president of Hidrocapital, the state-run utility in charge of Caracas' water supply.

Information Minister Jorge Rodriguez in July announced a "special plan" to fix the issues, but did not provide details. The Information Ministry and Hidrocapital did not respond to a request for information.

Lack of water — and taps that sometimes spurt out brown — have triggered health concerns in a country lacking basic antibiotics and vaccines.

About 75 percent of Caracas residents said they do not receive water regularly, according to a survey published by two Venezuelan non-governmental organizations this month. Around 11 percent said they thought dirty water had caused skin and stomach problems. The survey does not have comparative figures.

Medical consequences are hard to gauge as the Health Ministry no longer releases once-weekly data, but doctors say scabies and diarrhea are on the rise.

In the low-income neighborhood of Catia, university professor Mariangela Gonzalez, 64, has 127 bottles, gas containers and pots clogging the entrance to her house.

"When the water comes on, we have to run," said Gonzalez.