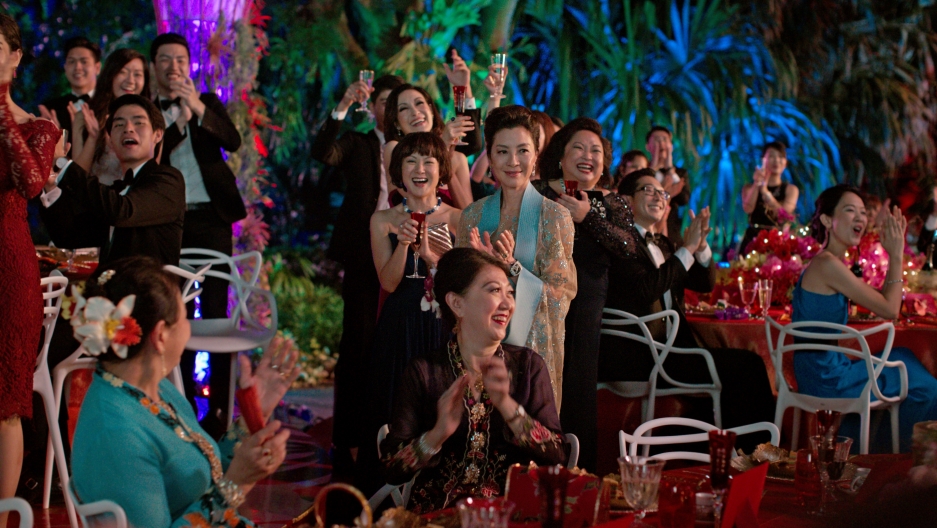 Mother of the groom Eleanor Sung-Young (Michelle Yeoh) has some reservations about about the love story between her son Nicholas Young and his new girlfriend Rachel Chu.

Cheryl Narumi Naruse remembers watching the first “Pirates of the Caribbean” in a theater in Singapore in 2003. There’s a scene where Jack Sparrow (Johnny Depp) dives into the ocean to save Elizabeth Swann (Keira Knightley) from drowning. Once she’s back on the ship, Jack Sparrow rips off her corset with a knife so she can cough out water and breathe again.

One of the soldiers says: “I would never have thought of that.”

“Everyone in the audience went, ‘What?’” says Naruse. “That doesn’t even make sense.”

Related: What happens when you let everyone in the world audition for a Hollywood studio film

Related: How to get beyond a tourist fantasy of Singapore

Naruse came to the US from Singapore as a college student in the early 2000s. People would ask her questions like, “Is Singapore in China?” “Have you ever met a white person?” and “Did you have running water?”

Naruse is now a professor of English at Tulane University.

Nowadays, Americans are aware of Singapore as a hyper-developed country, she says, in part due to travel shows highlighting Singapore’s architecture and cuisine. But Singapore is still often thought of as a backdrop — most recently to the Trump-Kim Summit last June — as opposed to its own unique country with a complicated history.

“We’re kind of a place that people have heard of but don’t know much about,” says Jeremy Tiang, a Singaporean author and translator who now lives in New York. His debut novel, “State of Emergency,” won the Singapore Literature Prize for an English-language fiction novel last week. “I often have conversations with Americans where I ask, ‘Oh, have you been to Singapore? And they’ll say, ‘I’ve changed planes there.’ They’re aware we have an award-winning airport.”

When “Crazy Rich Asians,” a film by Jon M. Chu that is adapted from the best-selling book series by Kevin Kwan, hits theaters on August 15, it will be a rare Hollywood movie that thrusts Singapore into the global spotlight. And while it has already been touted as a major win for Asian representation in Hollywood — a rare big US studio film with an all-Asian cast — people like Naruse and Tiang, who have ties to the small, tight-knit local Singaporean literature (SingLit) community, have mixed feelings about it.

This glossy, luxurious fantasy of Singapore that’s the setting of a rare, mainstream Asian American romantic comedy might be refreshing to see from a US perspective, but what kind of win is it for Singaporean representation if it’s showing a version of Singapore that’s only familiar to the richest people in the country?

“Crazy Rich Asians” follows Rachel Chu (Constance Wu), a Chinese American professor in New York, who goes to Singapore for the first time with her boyfriend, Nicholas Young (Henry Golding), not realizing that he is one of the most famous and eligible bachelors in Singapore whose family has an unfathomable fortune. They are attending the wedding of Nick’s best friend Colin — what everyone is calling the wedding of the year — and over the course of the festivities, Rachel meets Nick’s (mostly Chinese Singaporean) family and friends, as well as the greater community that treats them all like royalty.

“It’s because Singapore is an English-speaking country that it’s even possible to cast Asian Americans as leads, and be like, ‘This is an Asian American film’ — even though Constance Wu’s character is the only person in the film who is actually Asian American,” says Tiang.

“Which is not to say that it’s not relevant to Asian America,” says Naruse, who teaches Kwan’s novels to her students and is currently working on a book about Singaporean literature, contemporary capitalism and post-colonial independence. “But for a community that is so concerned about representation, I don’t understand why it’s not questioned a little bit more that Asians in Asia aren’t representing themselves.

There's been so much attention lately on the Asian American stars of #CrazyRichAsians so I just want to give a big shout out to some of the amazing Singapore stars in our film - Constance Lau (who plays Celine Lim), Pierre Png (Michael Teo), Koh Chieng Mun (Neena Goh), Selena Tan (Alix Cheng), Fiona Xie (Kitty Pong), Janice Koh (Felicity Leong), and Amy Cheng (Jacqueline Ling), who had a grand reunion today in Singapore with our wonderful producer Jon Penotti. I can't wait for you to see them all in the movie!!!

It’s not that there aren’t any Singaporean actors in the film. Pierre Png (who plays Michael Teo) and Tan Kheng Hua (who plays Rachel’s mom, Kerry Chu) are Singaporean TV stars. Ronny Chieng, most famous for being a correspondent on “The Daily Show,” was raised in Singapore, and the lead, Henry Golding, is based in Singapore. Also, many of the main actors are not Asian American, but Asian Australian or British Asian.

But most of the main cast are actors working in the US entertainment industry, so to many, “Crazy Rich Asians” still represents Hollywood outsiders taking a Singaporean story, molding it into a version that’s most palatable to the West, and getting away with selling it as authentic because of the Asian American stamp of approval.

“I understand the joy that comes with Asian Americans finally getting to see themselves on screen, but if Asian American joy is staged on the backs of Singaporeans, that’s a very colonial model,” says Naruse. “I think Asian Americans, because they’re contextualizing themselves as minorities, are not remembering that they’re a minority in one of the most powerful countries in the world. Just because we’re talking about Asian Americans — as opposed to white Americans — erasing our history, doesn’t make it less problematic. ” 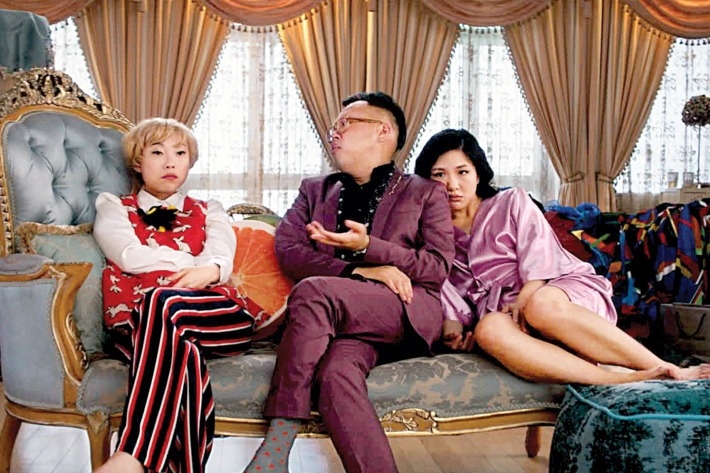 Tiang is quick to point out that Kwan’s books were also best-sellers in Singapore, so there are definitely Singaporeans who love “Crazy Rich Asians” and are excited to see a Hollywood film set in Singapore.

“We’re a very young country that’s only been independent for 53 years, and there’s still a lot of discussion about who we are,” says Tiang. “So any type of representation on the world stage becomes fraught because it happens so rarely.”

He says the reason the “Crazy Rich Asians” books are discussed more in the context of Asian American literature than Singaporean literature, is because they play into a very tourist-friendly, government-approved facade that most local Singaporean writers are actually trying to break down.

“Because the same party has been in power for over 50 years, the Singaporean government’s narrative has always been, ‘There were many obstacles, but we were determined, smart and resourceful, and we overcame them,’” says Tiang. “Which is not untrue, but I think that leaves out a lot.”

Pooja Nansi, Singapore’s first youth poet ambassador, says it’s hard for her to see “Crazy Rich Asians,” which is centered around Chinese Singaporeans, as a win for Singaporean representation.

“You have to understand that Chinese people make up [approximately] 70 percent of the population in Singapore,” says Nansi, pointing to the Malays, Indians, and Eurasians who also reside there. “In Singapore, Chinese people are the equivalent of white people in the US, so when Singaporean Chinese writers find an audience in the UK or US and play the minority card, it always rubs a little raw for me.”

It doesn’t help that South Asian characters in the film are mostly relegated to guards and servants whose sole purpose is to open doors for their rich East Asian employers.

“I do think Kwan's racial politics are somewhat problematic, but I also think that in the book, he's satirizing things,” says Naruse. “For example, none of the maids are given names in the book. They’re only referred to by their nationality and labor, and I do think there’s a way of reading that as satire and very much making fun of the elite in Singapore. But I think it would take knowledge and context to recognize that as satire, and that’s something I’m not sure would come across in the film adaptation that’s catering to American audiences.”

Nansi jokes that it’s not that she is encouraging anyone to boycott the film, but at the same time, she wants people to know that this is not at all the Singapore she knows and loves.

“Have you heard of Paris Syndrome?” asks Nansi. “It’s when Japanese tourists go to Paris and get depressed because Paris is nothing like they expected. If you come to Singapore after watching ‘Crazy Rich Asians,’ you’re going to get Singapore syndrome.”

“Actually,” she corrects herself, “you could easily come to Singapore, only see the shiny tourism version in three days, and never see what Singapore is. But if you really want to get to know the city, it’s a complicated place.”

“It’s nothing against Kevin Kwan,” says Tiang. “But I think this is an important conversation to have, where we can say it’s great that there’s a Hollywood film with an all-Asian cast that’s set in Singapore. But at the same time, I wish it represented Singapore more fully and that it had been more incisive in its critique of the economic system it’s looking at.”

6/ Of course it would be unreasonable to demand CRA be everything to everyone, but that’s not what I’m saying. A film marketing itself on progressive politics could be more thoughtful and cognisant of where it’s fallen short, and I hope AsAm audiences are open to this too.

A previous version of this story misspelled Cheryl Naruse's name.