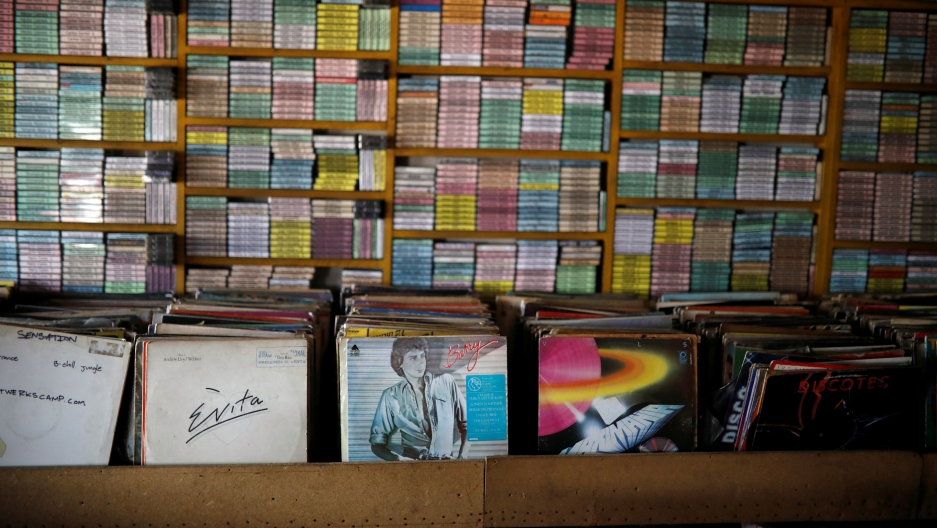 In 2018, it's sometimes hard to see how musicians are actually responding to the crazy world we live in.

But spin back 50 years and you have 1968 — a year of political upheavals. From the assassinations of Martin Luther King Jr. and Robert F. Kennedy, the seemingly endless Vietnam War, to the Paris riots, the deadly student riots in Mexico City, the Prague Spring and the tense showdown with Soviet communism, civil unrest was a worldwide phenomenon.

However, we know that those events fed restless creative minds.

Hugh Masekela, 'Grazing in the Grass'

Just take what was number one in America on the Billboard charts 50 years ago. Bookended by number one hits by Herb Alpert and the Doors, Hugh Masekela from South Africa hit the top of the US charts in July with a free-form jam.

You probably won't remember this, but in Japan 50 years ago this week a band called the Tigers was at number one with the tune "CCC." And it stayed there for six weeks. The lyrics say things like "I'm so high, no no no, I'm so down, I'm so blue ..." in Japanese and in English.

Kind of a bummer. But once the band gets to the bridge, you'll immediately recognize the other — happy — band from Liverpool they're clearly influenced by. By the way, "CCC" got bumped from the number one spot in Japan by Simon and Garfunkel's "The Sound of Silence."

In France 50 years ago, a Greek band called Aphrodite's Child came in at number one and stayed there for most the summer. That's right, a Greek band in France, with a number one hit in English called "Rain and Tears." It also went to number one in Belgium and Italy, which shows there's no arguing with taste.

Regardless of what goes on in the world, Brazil is a country that has always valued musical innovation. In 1968, the musical movement known as Tropicalia was born, and its manifesto was a revolutionary and critically acclaimed album called "Tropicalia ou Panis et Circencis," "Tropicalia or Bread and Circuses." It was a collection of songs by a tight group of friends who would go on to become Brazil's musical elite: Gilberto Gil, Tom Ze, Caetano Veloso, Gal Costa. They released "Baby" from their album as a single, written by Veloso and sung by Costa.

It climbed to number three on the Brazilian charts that summer and stopped there. It's still a great song.

So here's the thing about these chart-toppers around the globe in 1968: They were all different. Each country brought its distinct flavor, sound and artistic integrity.

Sure, it was partly the time: a world — and a music industry — that had not yet been fully globalized. It's not like today, with pop charts around the globe looking pretty monolithic.

This summer in the US, France, Japan, Brazil nothing feels very distinctive.

In fact, Drake with "In My Feelings" and Maroon Five with Cardi B doing "Girls Like You" can be found in the top 10 in all those countries. And lots of other countries too.

Hey, I'm not an old man shouting at you to "get off my lawn."

All right, back to Gal Costa.