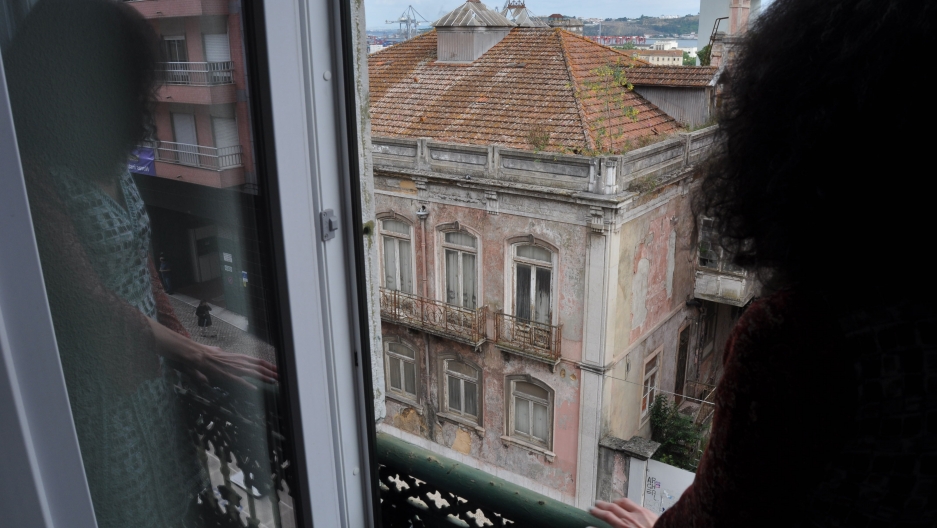 Helena Espvall looks from her balcony at a building slated for demolition in the Alcântara neighborhood of Lisbon. A number of formerly affordable areas of the city are undergoing rapid change as developers take advantage of Lisbon's rising international profile.

The thing that really sold Helena Espvall on the apartment she ended up buying was the view. The flat was in Lisbon’s far-flung Alcântara neighborhood, a good hour’s walk from the historic city center, but it had the most jaw-dropping view out over the mighty Tagus River and also onto a picturesque abandoned mansion across the street.

The mansion was a 19th century gem of a building, ramshackle but still grandiose despite its peeling pink paint and the shrubs sprouting from the roof. And so, when Espvall, a Swedish American musician who’s made Lisbon her home for the past five years, noticed a bulldozer on the property, she jumped into action. A little detective work revealed the mansion was to be razed to make way for a modern steel-and-glass hotel. Espvall put up fliers, started a petition and even overcame her shaky Portuguese to speak at three public hearings at City Hall, delivering impassioned, if not precisely grammatically correct, pleas for the mansion to be spared. 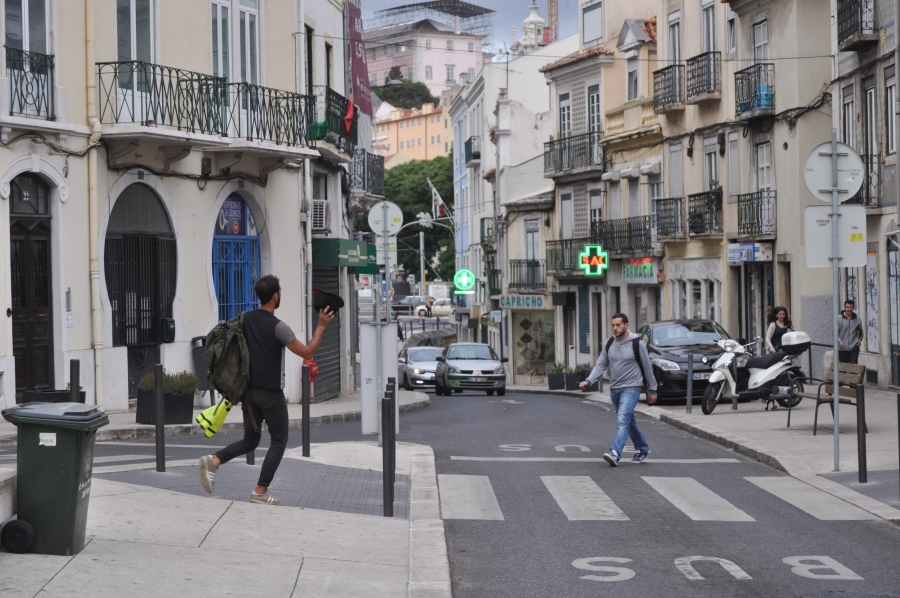 Stories like Espvall’s are a dime a dozen in today’s Lisbon, which is in the throes of dual real estate and tourism booms that are quickly changing the face of this long-overlooked and neglected capital on Europe’s far-western edge. While foreign visitors and home buyers are widely credited with having helped lift Portugal out of the biting economic and debt crises that sent the country into a tailspin starting around 2011, a growing chorus of critics is worried that this unprecedented wave of gentrification is flattening historic buildings, pushing residents out of their homes and threatening the very character of the city. 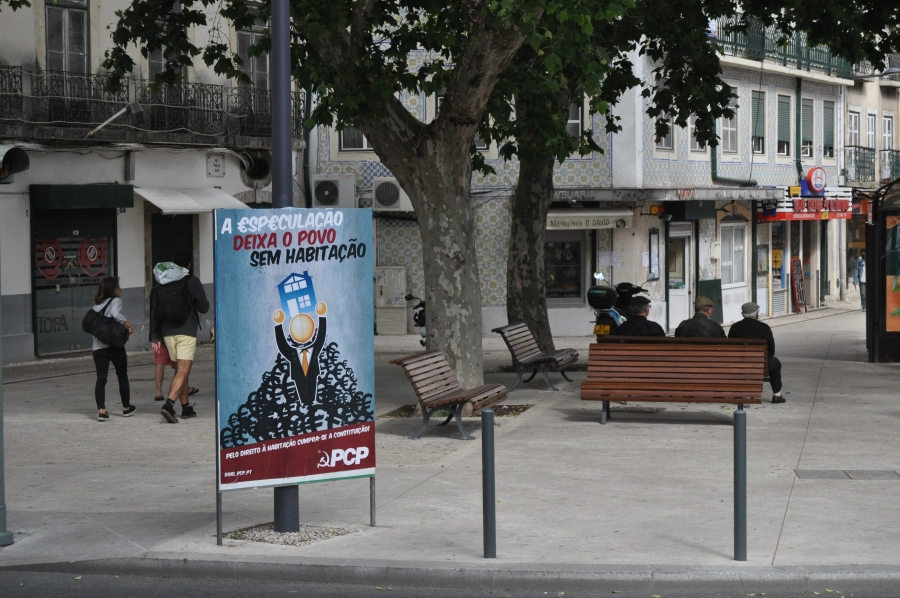 A sign from the Portuguese Communist Party reads "Speculation leaves the people without housing."

“Lisbon is a unique, historic city and it’s changing so fast, being transformed into something much more bland — just a collection of hotels, souvenir shops and luxury living for rich people,” said Espvall, whose efforts succeeded in staving off the threat of demolition — temporarily, at least. “The city center is becoming a kind of Disneyland for tourists and rich people, and we who love this city are really alarmed.”

The statistics reflect the magnitude of Portugal’s real estate boom. Nationwide, home prices have risen around 25 percent since touching bottom in 2013, according to data from the INE national statistics agency. Some sought-after neighborhoods in Lisbon’s historic center have seen price hikes of upwards of 60 percent, with certain top-shelf properties now fetching prices per square meter similar to those seen in Paris — long one of Europe’s most expensive cities. Rents have risen at a similarly brisk pace, driven by spiking demand and dwindling supplies as owners opt for lucrative short-term rentals like Airbnb.

The head of the residential department at the real estate services company JLL, Patrícia Barão, hailed Portugal’s recent emergence onto the world stage. Last year, her firm’s clients included citizens of 50 foreign countries, with Brazilians, French, Chinese, Turks and South Africans topping the list. Six out of every one of JLL’s 10 clients last year were foreigners, she estimated. 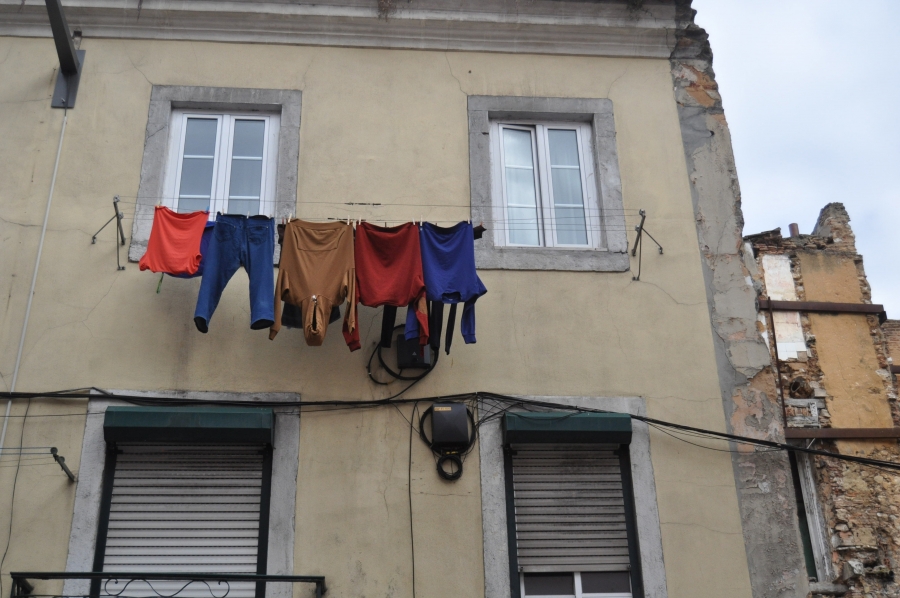 Alcântara has traditionally been a working-class neighborhood, but big changes are underway.

“Portuguese ships discovered the rest of the world centuries ago, and the world has finally discovered Portugal,” said Barão, citing the recent influx of A-list celebrities, from Madonna to actor Michael Fassbender, said to be snapping up properties in Lisbon. “It’s nothing short of a sea-change.” 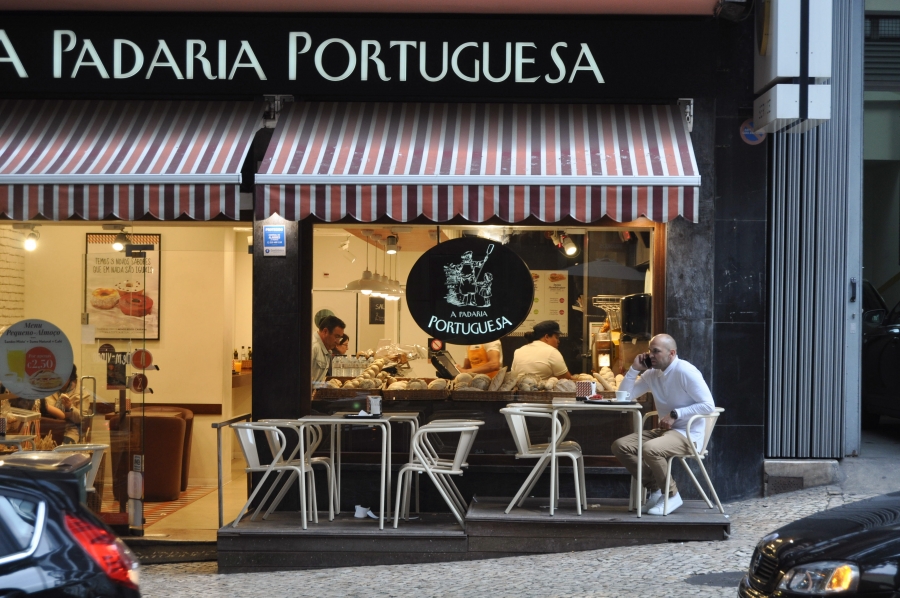 This upscale bakery sits just down the street from the crumbling building in the previous image.

The boom began around five years ago, after the previous government implemented a string of measures aimed at boosting foreign investment. One grants tax breaks to certain foreigners living in Portugal. Another, the so-called Golden Visa program, offers Portuguese residency for non-EU citizens who invest more than 350,000 euros in property in historic neighborhoods. Since 2012, Portugal has granted more than 5,500 such visas, the overwhelming majority to Chinese investors. The scheme is credited with having pumped some 3.4 billion euros into the Portuguese economy.

Those initiatives also dovetailed with the loosening of longstanding pro-tenant legislation that had kept rents extremely low for decades. Previous rental regulations, the remnants of controls imposed under the late dictator António de Oliveira Salazar, resulted in a vicious cycle in which poorly paid landlords invested little or nothing in maintenance. Over the decades, staggering numbers of buildings here became dangerously run-down or were simply abandoned. 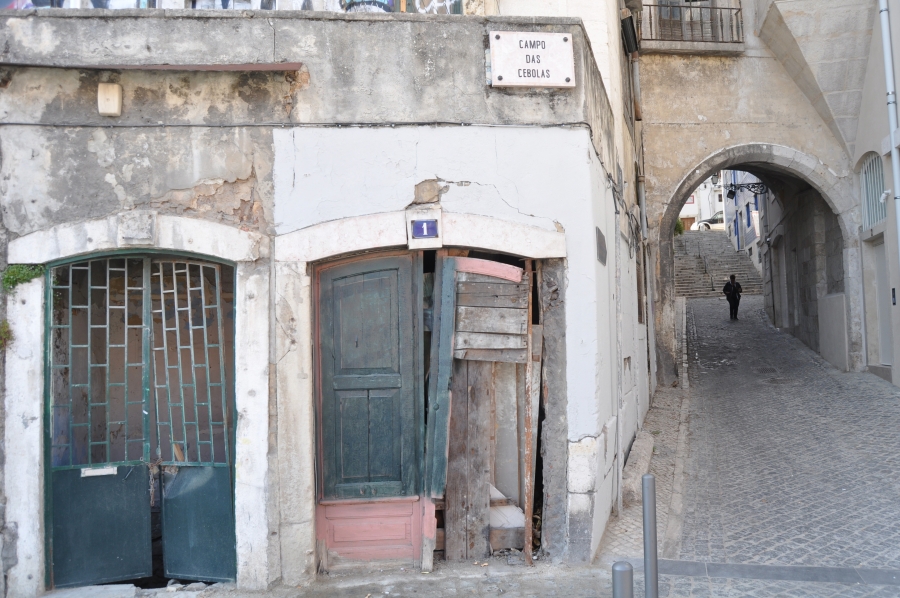 As more and more investors pour into Lisbon, dilapadated buildings like this one in the Alfama neighborhood are becoming more rare.

A 2014 study suggested around one-quarter of all residential buildings in Portugal were derelict, with the total cost of rehabilitating the properties estimated at around 39 billion euros, including some 9 billion euros in Lisbon alone.

Real estate developers contend that decades of dilapidation had already pushed many locals out of the city centers and into new developments in the suburbs. They say foreign investors are performing a service by renovating the dilapidated buildings.

Housing rights advocates, on the other hand, say Portuguese people can’t keep up with a hot housing market fueled by deep-pocketed foreigners. With a national minimum wage of just 580 euros a month, Portugal remains a much poorer nation than its western European neighbors, and advocates estimate that tens or potentially even hundreds of thousands of locals may have been priced out of their homes in recent years. A government survey from earlier this year estimated that nationwide some 26,000 families are living in “undignified” conditions. 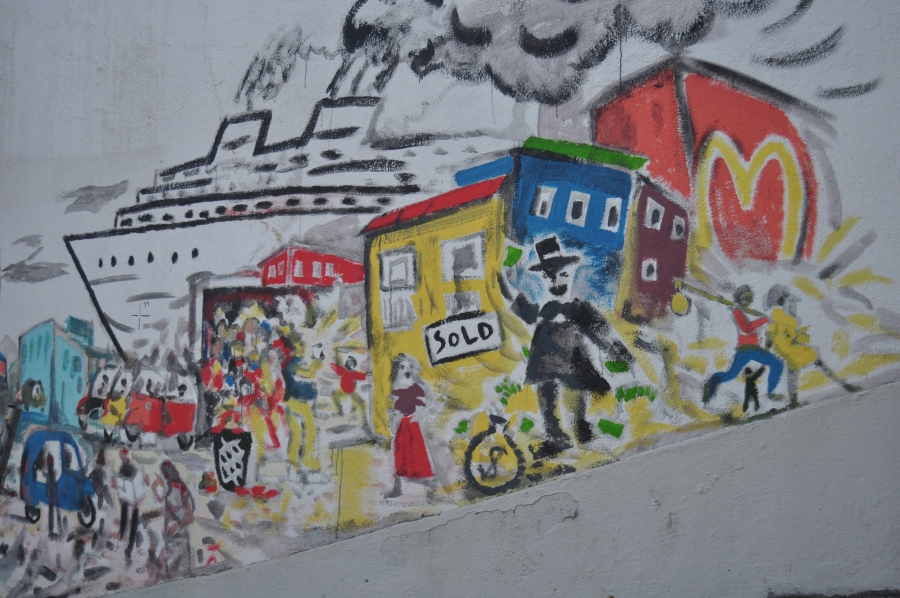 This mural is on a wall in the rapidly gentrifying Alfama neighborhood.

Gentrification has emerged as a hot-button political issue. An umbrella group called “Morar em Lisboa,” or “Living in Lisbon,” warned about the potential long-term effects of the real estate boom in an open letter contending that living in the city has become “a privilege of the few” and warning of a possible “collapse of numerous local communities that give color and life to the city.”

“The last few years were a perfect storm of gentrification,” Luís Mendes, a geography professor at the University of Lisbon and member of the “Living in Lisbon” group. “Compared to other countries, we still have some of the lowest real estate prices in Europe, but what’s cheap for foreigners is inaccessible for most Portuguese people.”

In a recent interview with the newspaper Público, Prime Minister António Costa acknowledged the extent of Portugal’s gentrification problem, saying, “Today, it’s impossible to find a home in the center of Lisbon.”

Parliament is now considering a raft of measures — including rent subsidies, tax breaks and other incentives — aimed at easing the housing crunch. And in April, Lisbon Mayor Fernando Medina announced a plan to turn some derelict buildings in the city center into rent-controlled apartments for low-income people. 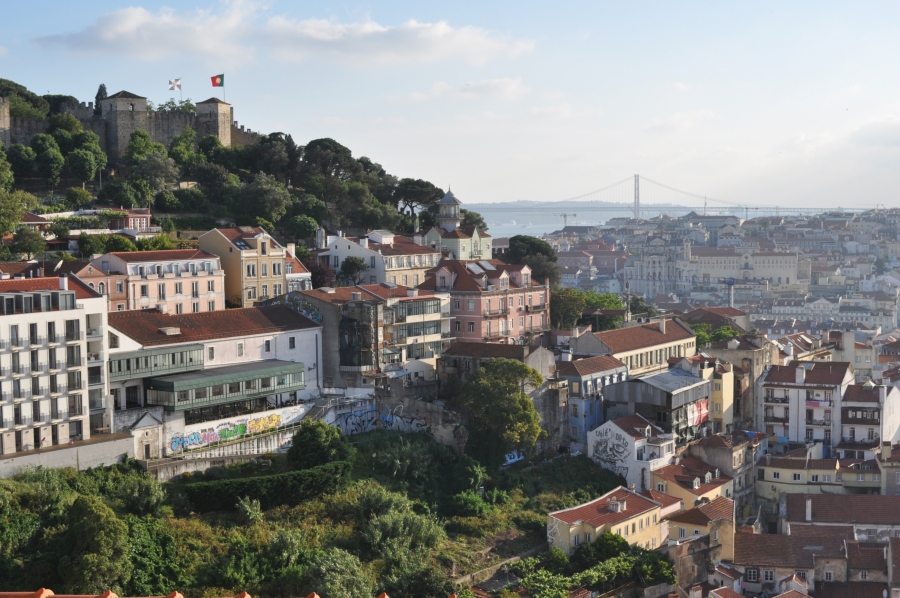 Once affordable, housing in central Lisbon is now out reach for most Portuguese.

Still, with construction seemingly everywhere and cranes mushrooming on the skyline as foreigners continue to flock to Lisbon, some worry the measures might prove too little, too late.

“As a foreigner, I was lucky enough to be able to buy an apartment that none of my Portuguese friends would ever have been able to afford,” said Espvall, the Swedish-American behind the fight to save the old mansion. “I know that I’m part of the problem."