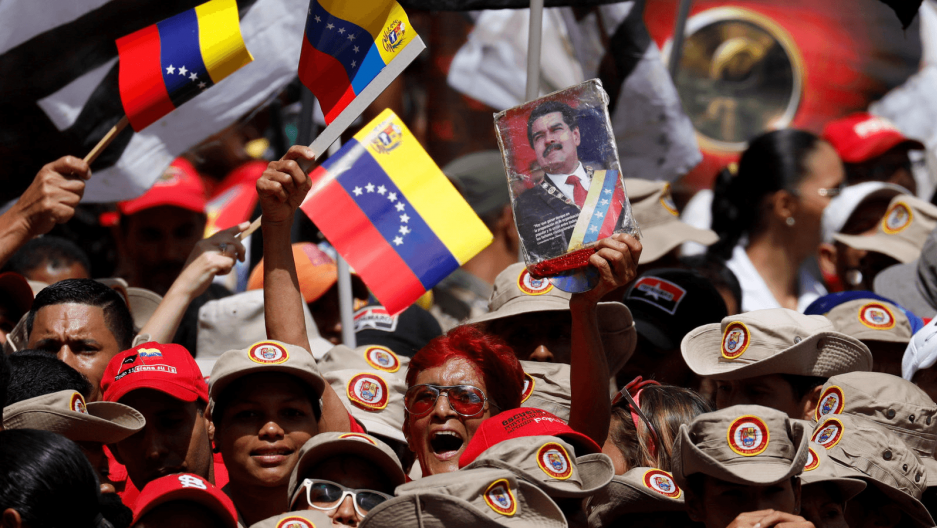 Supporters of Venezuela's President Nicolás Maduro attend a rally in support of him in Caracas, Venezuela, Aug. 6, 2018.

Hundreds of flag-waving supporters of Venezuelan President Nicolás Maduro rallied in central Caracas on Monday to show support for the leftist leader following weekend drone blasts that the government called an assassination attempt.

Maduro, whose approval ratings hover around 25 percent, with opponents blaming his policies for worsening an economic meltdown, has called government supporters to unite in the face of what he described as right-wing plots led by the neighboring Colombian government and exiles in the United States.

Colombia's President Juan Manuel Santos has scoffed at the accusations, saying he was fully focused on his granddaughter's baptism on Saturday, while US national security adviser John Bolton said Washington was not involved in the blast.

Related: Venezuela President Nicolás Maduro after attack: 'There will be no forgiveness'

Supporters wearing t-shirts emblazoned with Maduro's face massed in Caracas on Monday, with the president due to address the crowd from the Miraflores palace in the afternoon.

"Us workers are here to support the president. Nothing like that had ever happened on live television before, there is no justification for this attack against the president," said Melanie Díaz, 40, who works at the Food Ministry.

But turnout was thin at a few hundred supporters, many of them government employees, with some of them saying they had been ordered to attend, according to Reuters witnesses. Many Venezuelans who adored late leader Hugo Chavez have soured on Maduro, his far less charismatic successor.

"Today they told us we had to come support Maduro because of what happened on Saturday," said Maria Berríos, 60, who works at the National Institute of Urban Territory.

Venezuela's government said suspects launched two DJI M600 drones laden with C4 explosives over an outdoor rally Maduro was holding in downtown Caracas to commemorate the founding of the National Guard on Saturday.

One was "diverted" by security forces while the second fell on its own and hit an apartment building, authorities said.

The attack highlights Maduro's challenges in maintaining control over the OPEC nation, where widespread food and medicine shortages have fueled outrage and despair everywhere from hillside slums to military barracks.