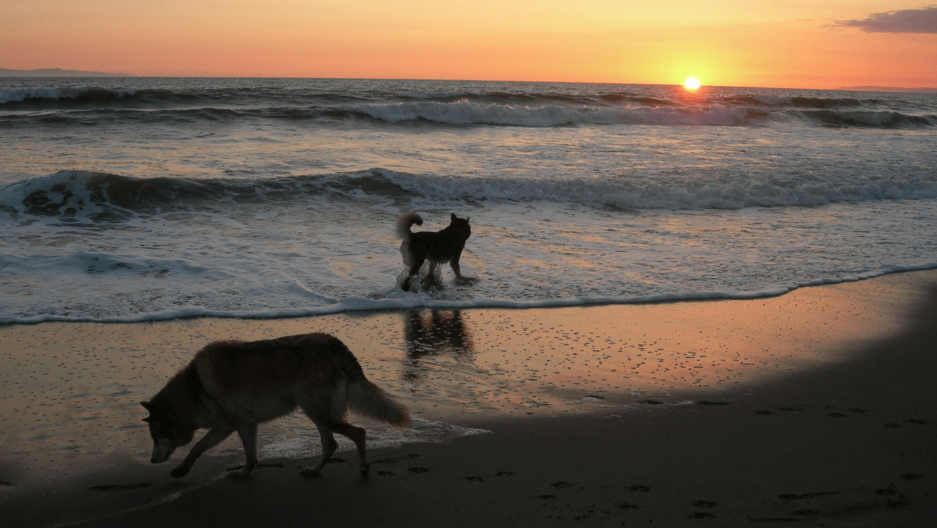 In French, there is an expression that describes dusk as the time "between dogs and wolves."

There’s an evocative French expression that refers to dusk — entre chien et loup, or “between dog and wolf.” As a child, I’d fantasize that when the day darkens a dog could turn into a wolf, as if the power of night could morph tame pets into wild beasts. And if you ventured outside at twilight, as many fairy tales warned against, you didn’t know whether you’d come upon a dog or a wolf.

That was my interpretation.

It turns out I wasn’t that far off. Jean Pruvost, a linguist who has studied the expression, gave me some background on “entre chien et loup.” He says it comes from a Latin phrase, intra hora vespertina inter canem et lupum, that dates back to at least the 7th century. And it refers to the time when the daylight dims and you could mistake a dog for a wolf.

It makes sense, though it loses something when you live in a city where the streetlights turn on at dusk.

Pruvost likes to point out that before the advent of street lights many people lived in small villages surrounded by forests, so dusk could seem a lot more menacing than it does today.

“In ancient times,” Pruvost says, “villages were often located in a clearing on the edge of the forest. The Latin word foris (which is the root of 'forest’ and ‘foreign’ in English) means ‘outside.’ The forest was the outside, the territory of the wolf — the dark, the night and fear from prehistoric times through the Middle Ages.”

I had a sense of that recently. I was walking through a large forest at dusk as the wind rustled leaves. Suddenly, from the depths of the woods, I heard dogs barking. I wondered for a moment whether those dogs were going to chase me or maybe even turn into wolves.

“There is a threat in ‘entre chien et loup,’” Pruvost says. “It implies something unsettling — when you can’t distinguish what is tame from what is wild. The wolf conveys something frightening and nightmarish. He represents the night, while the dog represents the day.”

But dusk, that ephemeral time of transition, doesn’t have to be so menacing. Around the summer solstice in France, the blueish twilight seems to go on forever.

In my mother’s garden in Burgundy, flocks of starlings spin above, followed by bats who feed on bugs as the skies darken. And by the riverbanks, thousands of tiny birds bed down in large plane trees for the night in a deafening chorus.

Now, in the midpoint of summer, day fades to darkness when the church bells toll 10 pm.

And at the end of dusk comes relative silence and the occasional shadow of a dog.