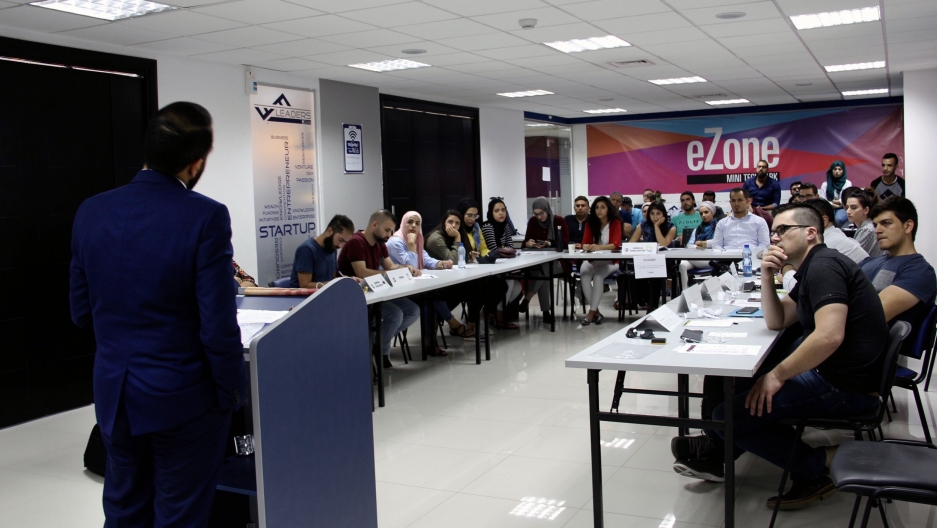 Ahmad Shami, one of the founders of Toastmasters Ramallah and currently a spokesperson for Palestinian Prime Minister Rami Hamdallah, speaks to the room about the importance of planning to achieve professional success at a Toastmasters meeting on July 23, 2018.

Laith Azzam, 19, is delivering a speech about artificial intelligence to dozens of Palestinians in their 20s and 30s in a Ramallah office boardroom. Politics are the last thing on his mind. The third-year medical student gets excited by the latest developments science and tech, not the Israeli-Palestinian conflict.

Yet the reason he’s here at Toastmasters Ramallah, part of a network of public speaking clubs around the US and abroad, has everything to do with the fact that he and the club’s other members grew up under decades of Israeli military occupation in the West Bank.

Azzam joined Toastmasters as a positive way to oppose Israeli policies, as opposed to violence.

“I do not believe in some forms of resistance that we as Palestinians show here in Palestine, so I created my own form of proving the right of existence,” he says, “through extracurricular activities, as a way to create change.”

Toastmasters is an organization founded in the early 1920s in California that now has public speaking clubs all over the world. Members speak their way through a structured, almost cultish curriculum in hopes they will become capable of delivering confident orations that range from work presentations to wedding toasts. Speakers are asked to avoid controversial subjects like politics, religion and race. It’s an unspoken rule.

So far, this growing group in Ramallah has followed that custom. But major aspects of its members’ lives are controlled by Israel, a country in which they have no say. And with no serious peace process underway, Palestinians today have little hope to see a state of their own. But the club’s founders and members admit that keeping this chatty forum politics-free is simply close to impossible in the West Bank.

Back in 2015, a group of friends discovered Toastmasters while visiting the US and decided to bring the program back to the West Bank. The 30 or so current members are mostly from the upper strata of Palestinian society — fluent in English, college-educated and well-traveled.

Now they meet in Ramallah, the economic and cultural hub of the West Bank, every two weeks. And there is talk of creating more chapters in conservative cities of the West Bank like Jenin and Nablus, as well as in the Gaza Strip.

One of the founders of Toastmasters Ramallah, Ahmad Shami, says he hopes this American tradition will help young Palestinians tell their stories to a wider audience and legitimize the Palestinian narrative on an international stage.

“I wanted to open the doors for more Palestinian youth to actually express their message, which I think is very interesting compared to the rest of the world,” he says.

Shami lived in the US for a few years and now works as a spokesperson for Palestinian Prime Minister Rami Hamdallah.

“Toastmasters can open the doors for Palestinians and Palestine to be more integrated with the world, with international institutions and to actually bring our important story,” he says.

Club member Maryam Nuwarah, 27, says she was so shy when she first arrived at Toastmasters that she could barely speak her name. She’s a painter, and her artwork depicts her family’s experience as refugees over the generations.

Like any serious artist, Maryam wants to communicate her work and the story behind it. Toastmasters has helped her achieve that. “Sometimes we don’t think that speaking is important because we are shy and other people don’t care about our story,” she says. “But when I came here, I realized that my story is as important as others. It helped me get the things I feel inside and my opinions out, and I realize that a lot of people care about it.

For Sami Ardoni, the club’s newly elected president, the restrained, polite atmosphere of the Toastmasters is a breath of fresh air.

“I love that fact, that we don’t talk about religion and politics,” he says. “Because everything in our daily lives is interfered with [by] politics and religion or both. It’s heavy for the soul.”

When club members or guests inevitably raise political subjects in their speeches, Ardoni says he has ways to politely shut them down. Like a couple months ago, when a guest of the club spoke about separating religion from public life. But that may be changing.

After thinking back to one particular speech he gave, his most political, Ardoni suggests that he wants Toastmasters to become more of an open forum where people can discuss political issues. In that speech, he said that he opposes Israeli policies in the West Bank not out of deeply held Palestinian nationalism, but rather his own liberal principles. It kicked up mixed responses and emotions within the meeting, but Ardoni says it was the most important speech he gave.

“Palestinians need to be able to speak to the world, to deliver our point of view and ideas,” he says. “If we want to achieve our national dreams, then we can’t do it ourselves. We have to talk to the world.”