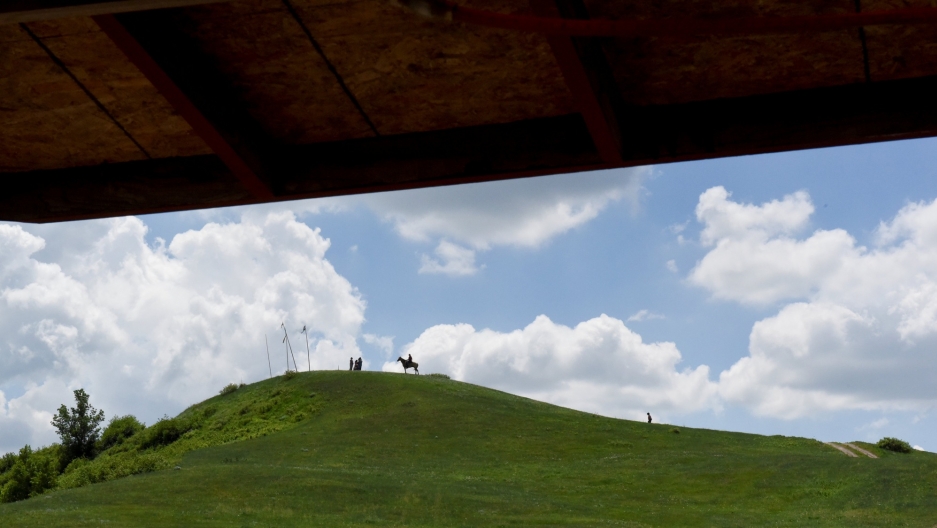 Jayden Lookinghorse, riding his horse, stands on top of a hill on the Cheyenne River Reservation South Dakota.

In an ongoing  struggle for tribal sovereignty, Native American tribes that tried to block the Dakota Access oil pipeline in North Dakota more than a year ago are carrying on their fight in federal court.

"People think Standing Rock has come and gone," said Danielle Ta’Sheena Finn, a spokeswoman for the Standing Rock Sioux, referring to the sight of the protests. "But we will continue this fight until we are heard and the world knows what happened to us."

The pipeline, owned by Energy Transfer Partners LP (ETP), has been operational since June 2017, after President Donald Trump granted its permit over the objections of tribes and environmentalists fearful that it would pollute a waterway sacred to the Standing Rock and Cheyenne River Sioux.

The pipeline approval, part of Trump’s desire to increase  domestic energy production, distressed Native people in the United States and Canada who were concerned that it discounted Indigenous rights.

The Standing Rock and Cheyenne Sioux sued the US Army Corps of Engineers soon after Trump ordered it to approve the pipeline, arguing that the tribes had not been properly consulted.

The Army Corps of Engineers is involved with US military construction projects around the world and also advises civil engineering activities, such as dredging America's waterways and cleaning up hazardous or toxic sites.

US District Judge James Boasberg in Washington, DC, is weighing whether the Corps adequately considered effects on the tribes before approving the pipeline. He is expected to rule by Aug. 10.

The Army Corps did not respond to a request for comment, but it has previously said that it worked diligently to meet obligations to tribes.

The tribes have expressed hope that Boasberg will suspend operations on the pipeline. They have said that they are prepared to appeal if he does not.

ETP declined to comment, but it has repeatedly said the pipeline would be safely operated.

The 1,172-mile pipeline was built to move crude oil from North Dakota's Bakken shale fields to a refining and transport hub in Patoka, Illinois.

"We know we are going to fight this to the very end,” said Standing Rock's Finn.

Laramie and a treaty

Opposition to the pipeline played a central role in last spring's gathering of tribes at Fort Laramie, Wyoming, to mark the 150th anniversary of a peace treaty between the Sioux Nation and the United States.

Under the treaty, the federal government recognized the Black Hills of the Dakota Territory as part of the Great Sioux Nation and hostilities ended between the Sioux and white settlers.

The Sioux contend the pipeline was built on land they never agreed to give up.

In 1868, their land included most of South Dakota and parts of Nebraska, Wyoming, Montana and North Dakota. It has shrunken to several smaller reservations in the region.

Members of the tribes rode hundreds of miles on horseback to get to Laramie, passing through tiny communities like Green Grass, South Dakota, the spiritual center of the Lakota People on the Cheyenne River Sioux reservation.

Tribal leaders expressed disappointment that no senior members of the Trump administration were at Fort Laramie to commemorate the milestone for Indian country.

Harold Frazier, chairman of the Cheyenne River Sioux, said the convocation was a reminder for Native Americans that the federal government had fallen short of its agreements under the Laramie Treaty including by approving the Dakota Access pipeline.

"They (the United States government) ought to be ashamed of themselves," Frazier said. "They have a moral obligation to uphold the honor of the Great Sioux Nation."

Ivan Lookinghorse, a medicine man from the Cheyenne River Reservation and an organizer of the ride to Laramie, said the tribes intended to use the momentum from that gathering to stay unified as they gear up to fight other projects that they maintain threaten their wellbeing.

"We are going to keep it going, keep organizing meetings and find a way to be able to take care of the health and welfare of our people, and preserve land and water," he said.