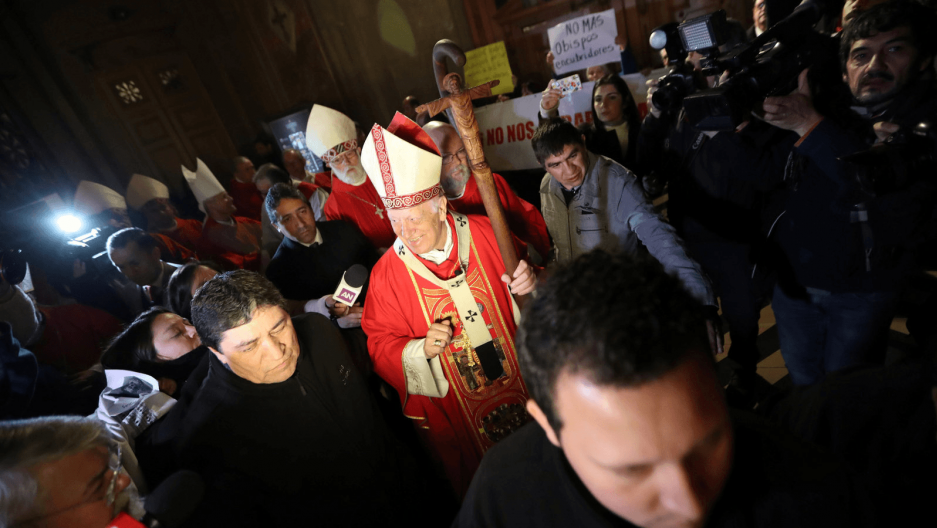 Archbishop of Santiago Ricardo Ezzati attends his religious service as citizens protest against him after being summoned to testify in an investigation into the alleged cover-up of child sexual abuse by members of the Catholic Church, at the Santiago cathedral, in Santiago, Chile, July 25, 2018.

Two special envoys sent by Pope Francis to investigate a child sex abuse scandal in Chile were meeting priests and Church workers at a university in the Chilean capital last month when aides rushed into the room with an alarming development: police and prosecutors were about to start raiding Church offices.

The envoys were 90 minutes into a seminar on how to investigate allegations of sex abuse committed by fellow clergy following revelations that hundreds of children might have been molested. For decades, the Roman Catholic Church in Chile quietly investigated such allegations without alerting police, but it now stands accused, even by Pope Francis himself, of a cover-up that allowed abusers to operate with impunity.

One of the clergymen listening to the envoys was Jaime Ortiz de Lazcano, the legal adviser to Santiago's archbishop. The aides rushed to his side and told him, "'Father, go to the [Church offices] because there’s going to be a raid’," Ortiz later recounted.

Police and prosecutors were staging simultaneous raids on Church offices less than a mile away from the university and outside the capital, looking for evidence of sex crimes the Church had not reported to police.

The surprise sweeps, ordered by Emiliano Arias, a provincial prosecutor, marked the start of what experts who track sex crimes in the Roman Catholic Church say is one of the most aggressive investigations ever undertaken by a judicial authority anywhere in the world.

Since that cold June afternoon, there have been five more raids on Church offices to seize documents, phones, tablets and computers, leaving the Vatican scrambling to respond to a rapidly unfolding scandal that is the worst image crisis of Francis’ papacy, now in its sixth year.

Leading the charge against the Church is Arias, 45, who is experienced in fighting organized crime and has a showman's fondness for taking television news crews on the raids.

Arias told Reuters in an exclusive interview that documents seized by his team contained 30 cases of alleged abuse dating back to 2007 that the Church had not reported to the police. While Reuters was allowed to film his investigators poring through seized documents, he declined to give details from the files because he said they named victims of abuse.

Reuters was unable to independently confirm those assertions.

Víctor Villa Castro, head of communications for the Santiago archbishopric, said he could not comment on any cases under investigation by Arias.

“We would, however, say that we have no knowledge of the destruction of documents, nor the covering-up of crimes," he said. "The victims are the first, and most important, in this and we will cooperate with the civil authorities in any way that can help to get to the truth of these matters.”

Arias says he wants to arrest both those who perpetrated the abuse and those who he says helped to cover it up. He arrested Óscar Muñoz, a top aide to Santiago's archbishop, Cardinal Ricardo Ezzati, after seizing church documents in which Muñoz confessed to sex crimes. Muñoz's lawyer has acknowledged that some of the accusations in the documents are true but says he will challenge some others.

Arias last week named Ezzati, the most senior Roman Catholic in Chile, as a suspect, accusing him of covering up his aide's alleged abuses. Ezzati has denied any wrongdoing and promised to cooperate.

Arias said he launched the raids after Church officials in Rancagua, the capital of O'Higgins region, told him he would have to make a formal petition to the Vatican to obtain information he was seeking because it was protected by “pontifical secret.”

A spokesman for the Rancagua archbishop's office said they were told to do this by the Vatican and insisted they were cooperating fully with civil authorities. Vatican spokesman Greg Burke declined to comment.

The Roman Catholic Church says the “pontifical secret” provision in canon law is intended to protect the privacy of all involved in sex abuse claims. Critics say bishops have historically used it as a shield to block inquiries from civil authorities.

"We are not talking about a fraud, or a theft, we are talking about crimes against children," Arias said in an interview in his office in Rancagua, explaining his decision not to submit the request to the Vatican and instead get a judge to approve the raids.

Allegations of sexual abuse of minors by clergy are not new, but under Chilean law governing the separation of church and state, the Catholic Church, a powerful and politically influential institution in this conservative Andean nation, has no legal obligation to report the allegations to police.

The sex abuse scandal came to a head after Pope Francis visited in January and was initially dismissive of claims by survivors of a cover-up by top Church officials there. A backlash among advocates for abuse survivors prompted him to dispatch an investigator, Archbishop Charles Scicluna of Malta, who produced a confidential 2,300-page report on the allegations.

After receiving the report Pope Francis wrote an open letter to Chile's faithful in May in which he decried "the culture of abuse and the system of cover-up" by the Church in Chile.

He summoned all 34 of Chile's bishops to Rome in May where they offered to resign en masse. He has so far accepted five resignations and is expected to accept more.

Arias speaks mostly without emotion during the hour-long interview until he talks about how, according to their accusers, priests convinced their victims that they were doing nothing wrong. Then he displays flashes of anger, sometimes so impassioned that he trips over his words.

“I have seen some tough cases but what shocks me about all this is the abuse of conscience — how an accused [Church worker] has entered into the soul of another person and is capable of convincing him that satisfying his desires is not even a sin,” said Arias, who describes his family as “very Catholic” but says he is lapsed.

Arias said he can prosecute senior Church officials for covering up the abuses if he can prove they knew about systematic abuse and failed to do anything to stop it, or hid evidence to prevent civil authorities from getting involved.

But first he must prosecute the abusers, said María Inés Horvitz, a senior lawyer at the State Defense Council of Chile, a public agency that provides legal advice to the Chilean state. And to do that he must find cases within the 10-year statute of limitations — a potential problem that has bedeviled prosecutors in other countries — or turn to the one court in Chile that still handles cases from before roughly 2000, which is backlogged.

But Arias has gone much further than his colleagues in his zeal to bring prosecutions. He has repeatedly widened his remit, from a handful of cases to dozens, from his provincial base to the capital, and from investigating claims of abuse by 14 priests in Rancagua to the alleged complicity of Ezzati, Santiago's archbishop, himself.

As a result of his uncovering new cases in Church documents, the national prosecutor last week authorized him to expand his investigation into other regions.

BishopAccountability.Org, which tracks allegations of sexual abuse by Roman Catholic priests, says the only comparable investigation into sex abuse in the Church was in Belgium in 2010 when police launched coordinated raids on Church offices and the home of a cardinal. That investigation did not lead to any prosecutions because of the statute of limitations.

Arias is carrying out his investigation in the absence of any public backing from the center-right Sebastián Piñera government. Shortly before becoming president in March, Piñera criticized the Church for its “defensive” attitude to the scandal and “insufficient” investigations but has remained silent on the issue since.

A government spokesman did not respond to a request for comment.

For decades allegations of sexual abuse by priests swirled through Chilean society, but little was done to address them. The Church was largely left to police itself.

But this year that suddenly changed.

Church watchers say several factors contributed to this watershed moment — the international attention received by several victims who went public; the pope's initial poor handling of the claims; and the ripple effect of the global #MeToo movement.

The waning support for the Church was evident when the pope visited Chile in January — there were many empty seats at his public masses. This was "a turning point for Francis’ papacy" a Vatican official said. "It is when he realized that he was listening to the wrong people about the real situation in Chile."

For Arias, the pope’s subsequent mea culpa that the Church had covered up abuses gave him the impetus he needed to act. “His description of what was happening in Chile was powerful and should concern us all,” he said.