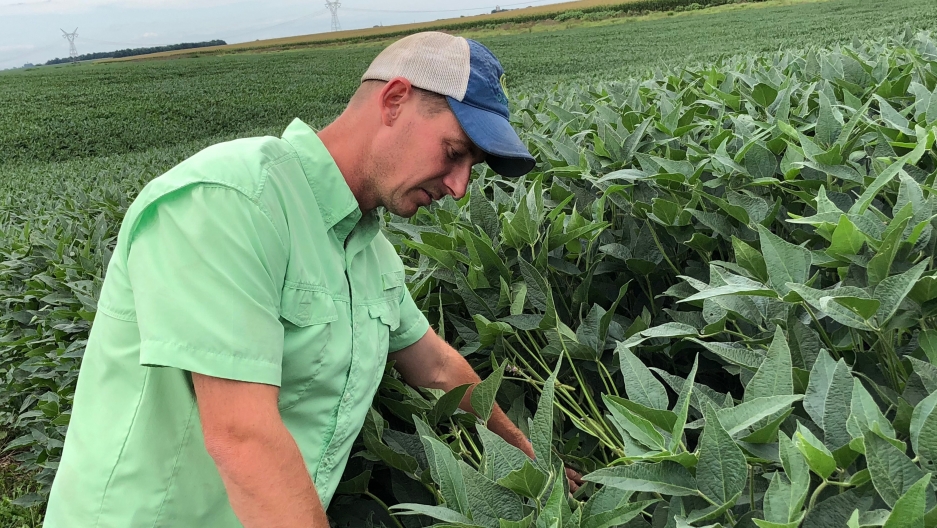 Soy farmers like Phil Sidles have seen prices for their soybeans fall sharply — down around 20 percent since May, not long after China announced retaliatory tariffs on American soybeans.

President Donald Trump was in southwest Illinois last week touting the re-opening of a steel mill. He credited tariffs for bringing back steel jobs.

But Illinois is also soy country — it’s America’s No. 1 soy-producing state — and soy and corn farmers there are worried about tariffs, retaliatory ones from China.

Speaking in Granite City, Illinois, Trump said American farmers would act like patriots to help him win a trade war.

But just how patriotic and patient are American farmers in Illinois feeling? How much belt-tightening can and will they do?

About 100 miles from where President Trump was speaking, Phil Sidles, 31, raises soybeans and corn. His grandparents started the farm in Buffalo, Illinois.

“Grandma, she’s 90 years old, and makes us lunch every once in a while, and Grandpa loves coming out,” Sidles said. “He's not active in the day to day anymore, but still likes to come out and make sure everything's going to plan.”

Things aren’t going to plan right now. Corn and soybean prices have fallen roughly 20 percent since China announced that it was putting tariffs on them back in the spring. 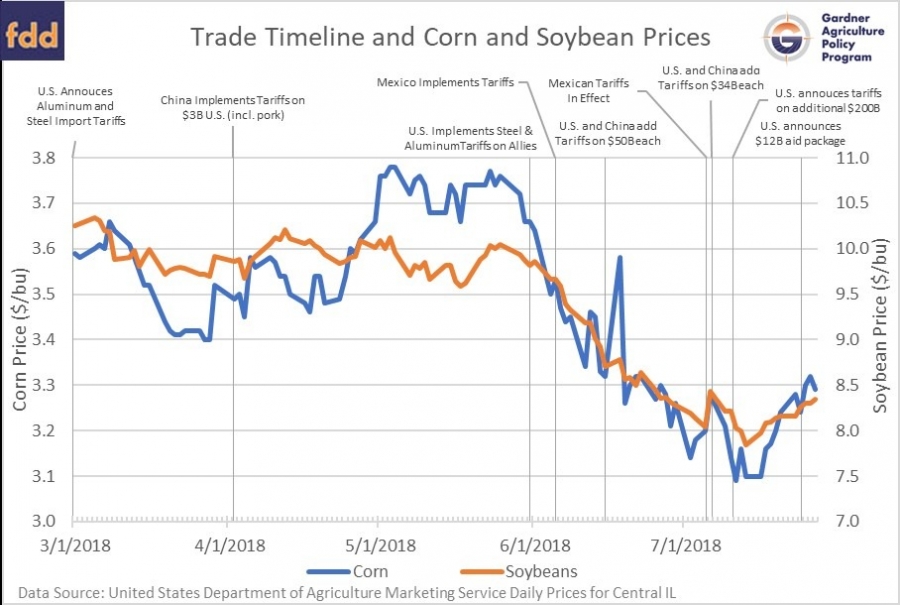 “It's hit our bottom line, sure," Sidles said. "This is kind of a new playing field, for me, especially, being a younger generation farmer: a trade war. And that's a scary term.”

Many farmers did lock in contracts before the price slide, and some are simply holding onto their crop until things turn around. Still, some farmers have to sell while prices are lower. (The US government discontinued direct payments to help farmers in 2014, but does help with a type of subsidized crop insurance.)

Sidles voted for Trump, and he believes in the president’s larger mission: trying to create a more level playing field for US trade overall, not just for agriculture.

“I have confidence and hope,” Sidles said. “He’s a businessman and knows what he’s doing. I think we can all agree that there have been trade problems in the world.”

But Sidles also appears conflicted about the president’s tariffs, and he worries about his family’s farm: “How long do we have to take it on the nose to see the endgame and have those positives of what he's trying to do?”

With that in mind, would Sidles vote for Trump again if the election were next week?

Mark Reichert, 58, grows soy and corn in Auburn, Illinois, and sits on the Illinois Farm Bureau board of directors. He didn’t want to talk about Trump or how he voted in 2016.

“I'm just not going to get political,” he said.

Reichert likes that the president has rolled back some regulations. But Trump’s trade policies have him worried that he’ll lose customers to places like Brazil. 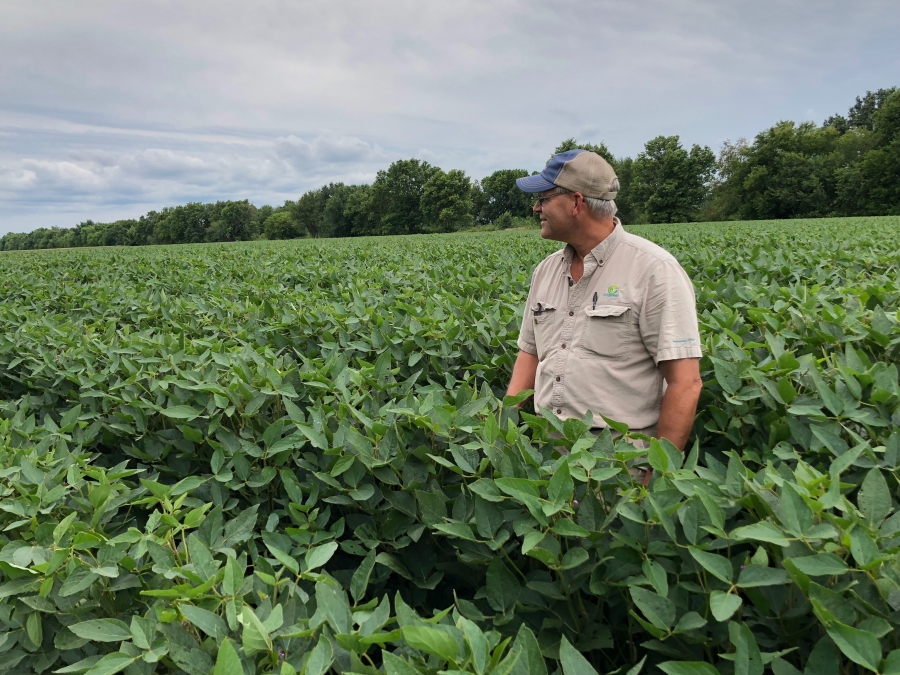 Illinois farmer Mark Reichert stands in his soybean fields. Reichert worries about the long-term impacts of Chinese tariffs — that it could be hard to get Chinese customers back.

Reichert is also bothered that the president has stepped away from international trade deals, like the Trans-Pacific Partnership, a 12-nation trade pact negotiated under the Obama administration that would’ve opened new markets for farmers. Trump pulled out of the deal as one of his first actions as president.

To help weather the storm, Trump announced last week that he would provide farmers with $12 billion in aid. Reichert said he appreciates the gesture, but: “Farmers would much rather embrace the free market. We would much rather have a market for our products than taking welfare.”

Soy and corn farmer Dale Hadden, 55, in Jacksonville, Illinois, says he has a better idea what to do with that aid money. “Take that $12 billion and use it in improving access to world markets.”

Last week, the president said that Europe would be buying a lot more American soybeans. Hadden wasn’t impressed with the announcement.

“Honestly, that deal was already in the works," he said. "What he's accomplished might have made it a little bit better. But what I'm saying is Europe is not one of our major importers of our goods. Mexico, China, Canada, Japan — those are big importers of our products.”

Trump also offered no details about how he would get Europe to buy more American soy, especially since private European businesses would be doing the purchasing and it’s unclear how European governments could make them buy soybeans from American farmers.

In agricultural towns like Jacksonville, it’s not just farmers feeling the pain from tariffs.

“I had a conversation with a car dealer the other day about my 16-year-old daughter looking for a vehicle. And I asked him, ‘Is it having an effect?’ And he said, ‘Definitely it's having an effect,’” Hadden said. “When farmers are not able to produce their crops and get at least what they need to recoup their costs, they're not going to be buyers in the marketplace for new products such as a pickup truck, or a new piece of farm equipment, or making improvements to a grain-handling system. So it’s going to have a ripple-down effect throughout all of rural America.”

So just how long can these farmers, and rural America, hold out? They’ve had several difficult years already. What are Hadden’s thoughts about the president’s statements that farmers would be patriots and stand up for his trade policies?

“I don’t disagree," Hadden said. "I know it's important to try and get some level-playing fields for some of these other markets. [But] we can't stand to be in this predicament price-wise for a very long period of time. These commodity prices were barely at or above break-even for me, so we’re below break-even, our cost of production.”

Hadden says if the financial stress continues into next year, people are simply going to give up and sell the farm.

Phil Sidles, who’s a generation younger, is trying to take the long view: “Grandma and grandpa literally lived through the Depression, and the struggles in the ‘80s, and then here we are the third generation talking about the ‘Tariff of ‘18.’”

The farmers hope that name sticks, and it doesn’t become known as Tariff of ‘19 as well, or worse. 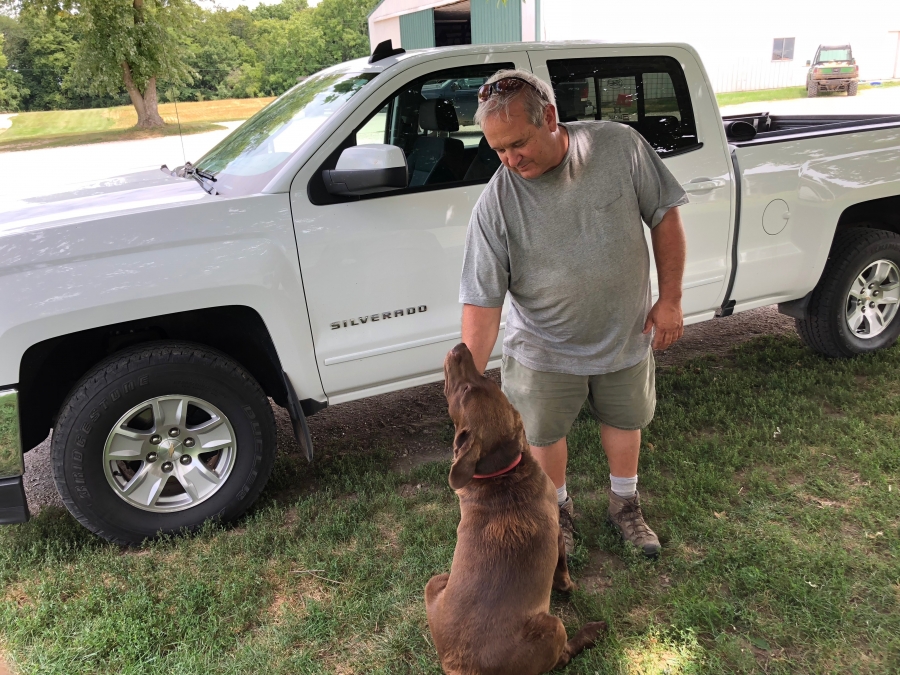 Farmer Dale Hadden pets his dog, Boomer. Hadden worries that if commodity prices stay depressed into next year, there will be an exodus of farmers in Illinois.