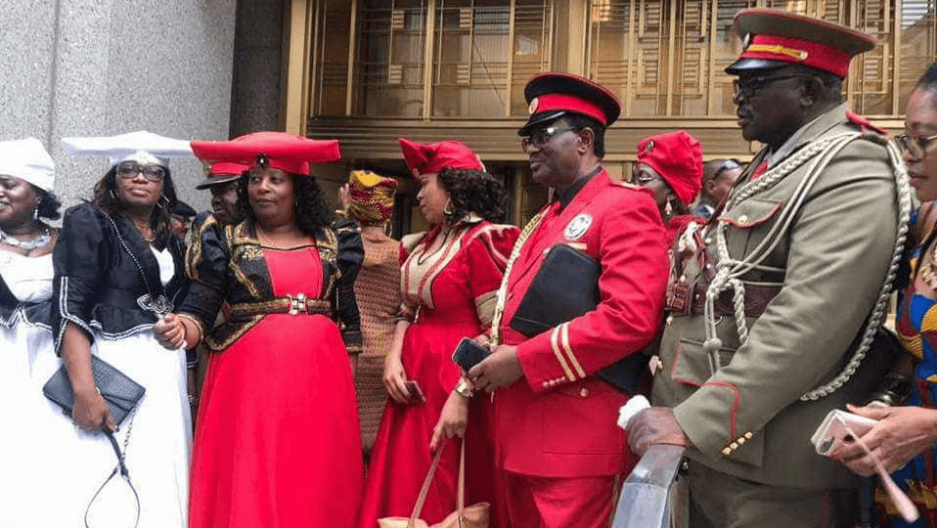 Representatives from the Herero and Nama tribes congregate on the steps of the Southern District Court of New York, October 2017.

For the last six decades, Germany has atoned and compensated for its historical role in the Holocaust of World War II, paying out an estimated $70 billion to survivors since 1952. However, a group of determined activists from Namibia has been fighting for recognition of the extermination of their ancestors by the German government in what has been termed the first genocide of the 20th century.

Though often overshadowed by the subsequent Nazi crimes of World War II, Germany’s colonial-era atrocities have recently been put under the spotlight. Between the 19th and 20th centuries, Imperial Germany administered several parts of Africa including modern-day Togo, Cameroon and Tanzania. What was then known as German South West Africa (today’s Namibia) is where some of the darkest chapters of Germany’s colonial rule unfolded.

In October 1904, after people from the Herero and Nama tribes launched a rebellion against German colonial settlers in South West Africa, German General Lothar von Trotha issued a written extermination order, saying: “Within the German borders, every Herero, with or without a gun, with or without cattle, will be shot.”

The edict goes on to clarify that women and children would not be spared.

Tens of thousands of Herero and Nama were starved to death in concentration camps in the desert or were massacred between the years of 1904-1908. It has been estimated that 80 percent of the Herero and Nama people were wiped out in the atrocities.

On July 31, representatives of the Nama and Herero people will descend on New York Southern District Court to see if their quest for retrospective justice will be successful. In pursuing their case, the Namibians have invoked the Alien Tort Statute, which allows for non-US residents to make a claim in a US court for international law violations. They call for a full, formal apology from the German government, and reparations that could stretch into the billions.

Esther Muinjangue is the chairperson of the Ovaherero Genocide Foundation and, like many of her compatriots, has a deep personal connection to the grave events. She spoke to PRI by phone from the Namibian capital, Windhoek.

“The genocide was always alive in the form of stories and tales narrated through the generations but people didn’t always comprehend the nature and scale of the atrocities," she said. "The mother of my paternal grandfather was raped by German soldiers, and he is the product of that. So, I feel that a part of my family tree is missing.”

The exact details of how much financial and land remuneration is being demanded remains a secret, but Muinjangue insists that the reparations must reflect how the Herero and Nama people were plunged into generations of poverty resulting from the massacre.

“We are not looking for money to line our pockets, the purpose is to restore dignity," she said. "This is the land where people were killed, and we have always felt that our demands have fallen on deaf ears. Allowing communities to be part of the reparation process would be a part of healing those wounds.”

One of the demands of the Namibians is that Germany negotiates directly with representatives of the Herero and Nama, rather than bilaterally with the Namibian government, which is composed of numerous tribes.

One of the chief negotiators for the German government, Ruprecht Polenz, told PRI that the government of Namibia can be their only interlocutor.

“When I have been in Windhoek, my impression is that between the Herero and Nama there are many different opinions on the case and so the only way for us to reach a solution is with the government," Polenz said. "They represent all Namibians and decide who sits on their behalf around the negotiating table.”

Polenz contends that Germany has no legal case to answer.

“There was no law in 1904-1908 that could apply. Sadly, there were genocides even before this but the 1948 Genocide Convention 1948 is forward-looking, not backward-looking, and this is what we are expecting that the New York court will say.”

In 1985, a United Nations report deemed the events in German South West Africa as “the first genocide of the 20th century.” In 2015, the German government recognized that the events constituted genocide but has ruled out direct reparations to the survivors. 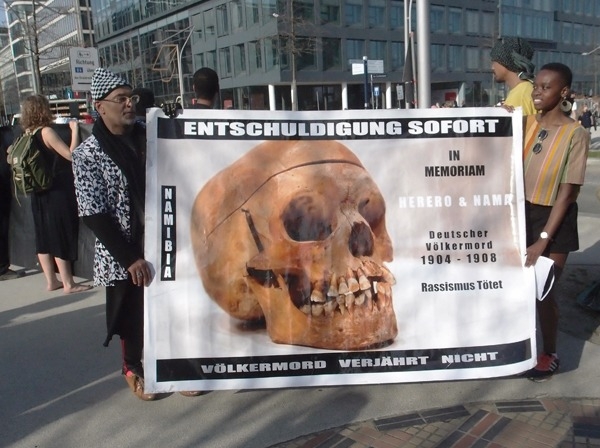 A Herero and Nama demonstration in Hamburg, Germany, April 2018.

Andreas Eckert, the chair of African history at the Humboldt University in Berlin, told PRI that this reticence may be due to fear of setting a legal precedence.

“There are big legal consequences if the Herero and Nama are successful," Eckert said. "It could trigger a wave of calls for compensation by Germany’s other former colonies, and countries affected by their wartime actions in Europe such as Greece and the Balkans. Germany is very afraid that this would open a Pandora's box, so they are being very cautious.”

The German government claims that Namibia is the recipient of one of the highest amounts of their aid money.

Uazuva Kaumbi, spokesperson for the Traditional Ovaherero Authority, said he sees this is as an unsatisfactory replacement for reparations.

“We need to make a distinction between Germany’s colonial obligation to make good, and the genocide," Kaumbi said. "Development aid is due to the post-colonial status of Namibia. [Herero and Nama] had specific atrocities perpetrated against them. All the evidence is there. And so, the reparations need to come differently, not under the guise of development aid. We say that this should be recognized specifically as a special package to redress the genocide.”

Polenz claims that the German government intends to establish a community trust that funds education, vocational training, housing and renewable energy in the lands where the victims’ families live. The funds would be different to and administered separately from the development budget.

Awareness of Germany’s colonial role remains low even in Germany, but recent high-profile campaigns by activists have gained traction. Earlier this year, local authorities in a district of northern Berlin decided to rename three streets — Nachtigalplatz, Petersallee and Lüderitzstrasse — that bear the names of German colonialists.

As the Namibian's day in court nears, Kaumbi says that even if they are not victorious, the pursuit of justice will never end.

“If Germany does not call it a genocide and reparations are not given, if we get fatigued and agree with the Germans to call it ‘atrocities’ and accept ‘development aid,’ this does not mean that future generations will not take it up again. They need to close this chapter so we can move on. Our children’s children may not be as patient as us.”

“There is no law against hope. David eventually defeated Goliath.”