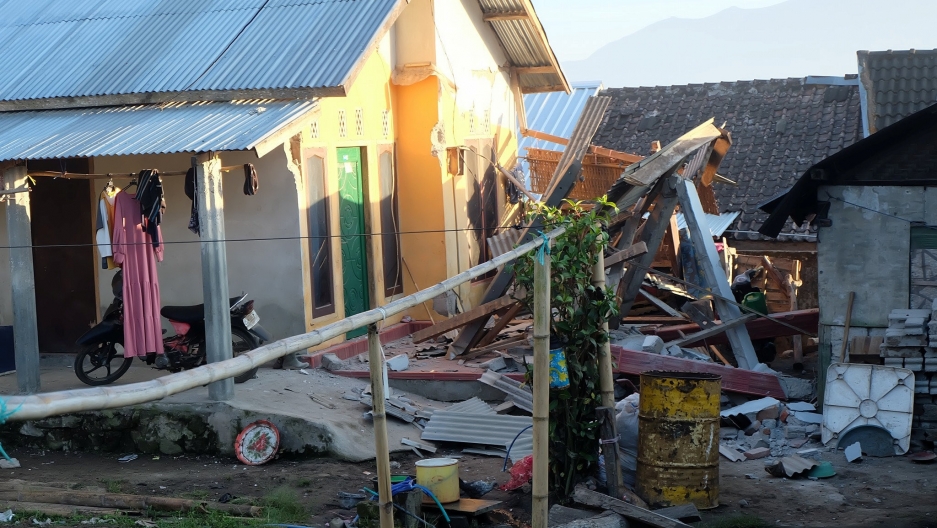 A damaged house is seen following an earthquake in Lombok, Indonesia, July 29, 2018 in this picture obtained from social media.

A powerful 6.4 magnitude earthquake struck the popular tourist island of Lombok in Indonesia on Sunday killing 14 people and sending villagers fleeing from their beds into open fields to avoid collapsing buildings.

The quake, which rocked the island early in the morning when many people were still asleep, injured 162 people and damaged thousands of houses.

Electricity was cut off in the worst-hit area, Sembalun, a sparsely populated area of rice paddies and the slopes of Mount Rinjani on the northern side of the island.

He said the area was temporarily closed to climbers because there were reports of landslides. Hundreds of climbers are being evacuated from the Rinjani national park and 115 have been safely escorted out, Nugroho said.

An emergency tent was set up on a street in Sembalun to treat the injured because the local hospital was damaged, and those in a critical condition were taken to other hospitals.

"It happened so suddenly at around 6 in the morning. Suddenly everything simply collapsed," said Siti Sumarni, a Sembalun resident. "My child was inside the house, thankfully he survived."

Standing outside a green tent set up on a dusty field, she said nothing was left of her house.

Video footage showed ambulances lining the streets of Lombok and many houses damaged with only parts of brick walls standing.

"We jumped out of our beds to avoid anything falling on our heads," said Jean-Paul Volckaert who runs a hotel near Senggigi on the western side of Lombok.

"I’ve been walking around but so far there is no damage. We were very surprised as the water in the pools was swaying like a wild sea. There were waves in the pools but only for 20 to 30 seconds," he told Reuters by telephone.

A magnitude 6.4 earthquake is considered strong and is capable of causing severe damage.

It was centered 50 km (31 miles) northeast of the city of Mataram, according to the U.S. Geological Survey, but it was also felt strongly to the west on the neighboring island of Bali, Indonesia's top tourist destination.

Over a hundred of subsequent tremors were recorded, with the largest aftershock recorded at 5.7 magnitude, Indonesia's Meteorological, Climatological and Geophysics Agency said.

The earthquake was on land and did not trigger any waves or tsunami.

Earthquakes are common in Indonesia, which is located on the seismically active "Ring of Fire" that surrounds the shores of the Pacific Ocean.