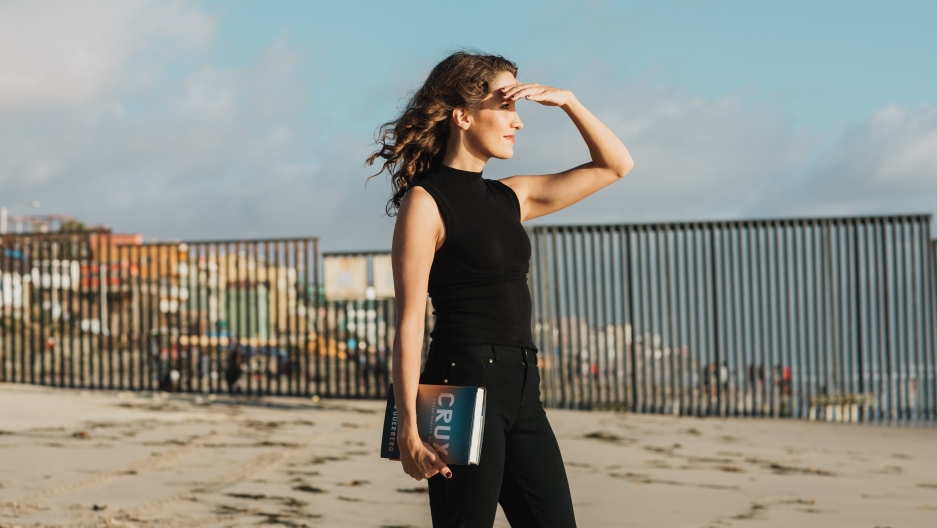 When author Jean Guerrero was just a child growing up in southern California, her Mexican father introduced her to the power of fantasy.

Their bond began to fray when he started to be overwhelmed by paranoid thoughts and suffered a breakdown. Guerrero, the Fronteras reporter for KPBS in San Diego, tries to untangle what happened to their relationship in "Crux: A Cross-Border Memoir." She spoke about her book with The World’s Marco Werman.

Jean Guerrero: In my first memory, my father and I are on an airplane and he points at this cloud that's outside the window. He somehow makes me see that he's reaching through the window and touching the cloud. I know, in retrospect, that this is clearly an illusion. He was using the power of suggestion and probably stroking the window to make me feel as if he was touching the cloud itself. But I remember it so clearly.

I remember the feel of the cloud in my hand and how surprised I was at the fact that it had no real substance. But my father was always blurring that line between reality and imagination. For me, he was always encouraging me to push past the material. He's this man who who crosses borders between madness and sanity, between science and spirituality. And I ended up crossing lot of borders in pursuit of him.

Marco Werman: So in 2000 your father had a breakdown after he and your mom essentially split up. You were about 11, living in a condo with your mother. Your father returns to the house and your mother insists that he stay downstairs. He thinks he's hearing voices in the walls. What does he do then?

He punched holes in the walls. He tore the floor bare of its carpet. He was trying to find hidden cameras or hidden microphones. He just he wanted to understand where these voices in his head were coming from. And he tore the condominium apart completely. And after that is when he disappeared and he was kind of in and out of my life after that for a while. I thought he was dead.

He wraps himself in tinfoil in this episode and asks you and your sister to do the same. Your mother tells you he's schizophrenic. What does that mean to you at the time?

It provided an explanation for why my father had changed. And that's what I was looking for. It meant that he wasn't gone because he didn't love me anymore, he was gone because of something biologically wrong with him. But I ended up becoming really obsessed with schizophrenia and I became eventually sort of convinced that I was going to become schizophrenic.  I became very self destructive.

So as a teenager you're drawn to Mexico. You write: ‘It felt liberating to dangle over the abyss in my father's country. I crossed again and again, crashing house parties, crawling into random cars, accepting drinks from older men.’ But what you're really doing is looking for your father, right? Explain that.

I would cross into Mexico and I would sort of feel like I was immersing myself in his world and recapturing him. My mother always told me, ‘Mexico is a dangerous place, you can't go there.’ But again that danger was attractive to me.

My father even from that very first memory where he's sort of dissolving the boundary of the window on the airplane, he was always encouraging me, either directly or indirectly, to push past the boundaries of reality and to push past the boundaries of what was acceptable and what was safe. So I was always crossing these lines to try to understand him and to try to become him. In a way I kind of lost myself searching for my father.

Jean, you write near the end of your book that your own preference is to ‘believe in shamans, rather than in lunatics,’ and that north of the border ‘Papi’ might be diagnosed or medicated, while south of the border he might be revered or consulted. Are you judging two different belief systems, because there are elements of both in United States and Mexico aren't there?

Absolutely. I never wanted to create an extreme dichotomy between the belief system in the United States and the belief system in Mexico. It's very porous and there's a lot of magic and fairy tale in the United States, just as there is magic and fantasy in Mexico. But for me, I rediscovered those magical aspects of my history and my family's life when I was in Mexico and when I immersed myself in that culture. When I was in the United States, I pursued this much more scientific, very objective, fact-based reality, trying to understand my father through neurotransmitters and diagnoses. For me, Mexico represented another opportunity, a different alternative.

So what has writing this memoir meant for you Jean?

Writing this memoir allowed me to untangle myself from my father. I realized that I didn't have to idolize him, and I didn't have to hate or reject him either. Reality is way more complex than I thought it was. And when I accepted that, when I learned how to dwell in that uncertainty, that was sort of when I was able to stop reliving his life. I could just accept him as he was. When I learned that I could do that, that was when I was sort of free of him.

Have your parents read the book? Do they agree with your portrayal of either or both of them?

My mother has read the book, and she is supportive of the book.

My father has not read the book. He is kind of trying to work up the courage, I guess. But he's been incredibly supportive of this project. I had this book launch party last week and I wasn't sure if he was going to show up. But he he did. And it meant so much to me to see him there. He came on his motorcycle. He actually stood in the front row. He just showed up. He was like, ‘Please don't tell anybody I'm here.’ And I'm like, ‘I will not.’ He didn't want people looking at him.

He doesn't believe in complacency. And I think that that is why he ultimately supports my writing of this book. I think he knows why I had to write this.