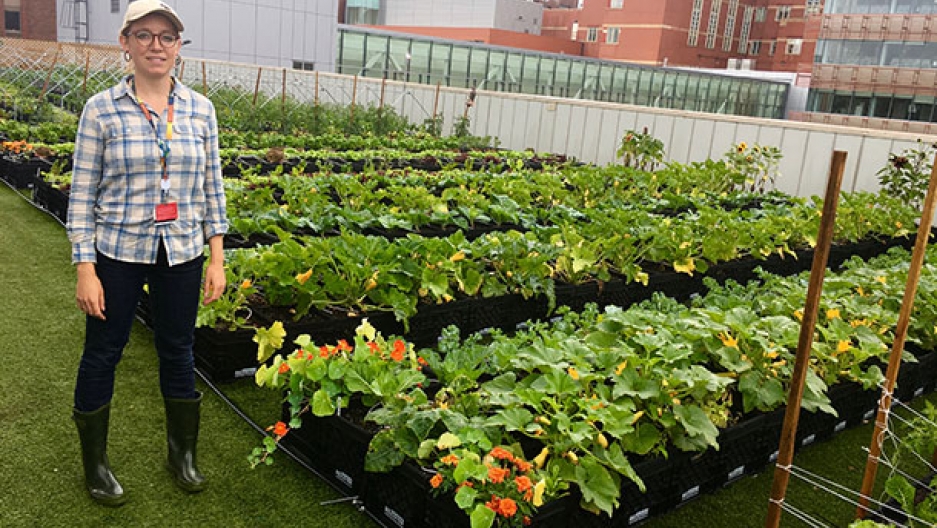 For Boston Medical Center, feeding patients is about more than making sure they get calories. Food is medicine, and that food comes from an unusual location — a farm on the hospital roof.

What was once a flat, black roof provides prime real estate for roughly 25 varieties of fruits and vegetables that feed hospital patients, visitors and employees. The farm is considered the first of its kind in New England.

“My biggest surprise within the first week was just how well the plants did,” says Lindsay Allen, who joined the BMC staff last year as the first farm manager. “I was really worried that they weren’t going to grow that well, but they were so happy and grew faster than anywhere I’d ever farmed. We planted, and then five weeks later we were harvesting radishes, salad mix, lettuce heads — and that definitely surprised me."

The crops are planted in neat, long rows of 2,300 total milk crates. Each crate is made from recycled woven fabric that allows for water drainage and air movement. The farm works in tandem with other initiatives like a food pantry for food-insecure patients and a hospital farmer’s market.

“It’s really integrated into a fuller picture of what it means to care for people in a way that I think more hospitals should be doing,” Allen says.

The farm supports a mix of crops, some of which Allen can harvest continuously, and others that are more season-specific. They include collard greens, tomatoes, kale, carrots, three varieties of cucumber and several types of peppers. Allen interplants other crops, such as bok choy and basil, which maximize growing space and encourage a variety of beneficial insects to visit.

“I try to think of this farm as an ecosystem as much as possible,” Allen says. “How do we keep all of the scraps that we aren’t actually using for food onsite, so that we can continue to create soil and compost up here? We also have bees to pollinate and then we get honey. That’s always a plus with keeping bees.”

Above some of the crates are a series of hoops, which Allen covers with cloth in the early spring and late fall. The hoop houses allow for earlier planting and mitigate against frost, which allows her to keep growing until about mid-November.

The farm is also a lesson in farm-to-table nutrition since Boston Medical Center already has a teaching kitchen, a healthy food project that got its start before the farm. Each class incorporates fresh food from the farm into cooking lessons that demonstrate BMC’s food-as-medicine philosophy.

“Our classes are free,” explains Tracey Burg, the culinary nutrition manager for the teaching kitchen. “We invite anybody to come in, but also people with heart disease, diabetes, cancer, renal disease. They come in for classes and we talk about disease-specific foods and cooking techniques that are healthy for them.”

Burg says the farm has been a huge asset to her work in the kitchen.

“I get my produce from there, but it’s also a learning space for us now,” she says. “I bring all my groups up there at some point during the growing season and we pick the vegetables, bring them down to the kitchen and cook them. It’s kind of like farm-to-table right in front of them."

And the end result is tasty, Allen says.

“Most people associate hospitals with terrible food, which is really interesting because right when we’re at our most vulnerable, in hospitals, you’d think that would mean we need nourishing food,” Allen adds.

And right now, they’re also looking forward to a bumper crop of tomatoes.