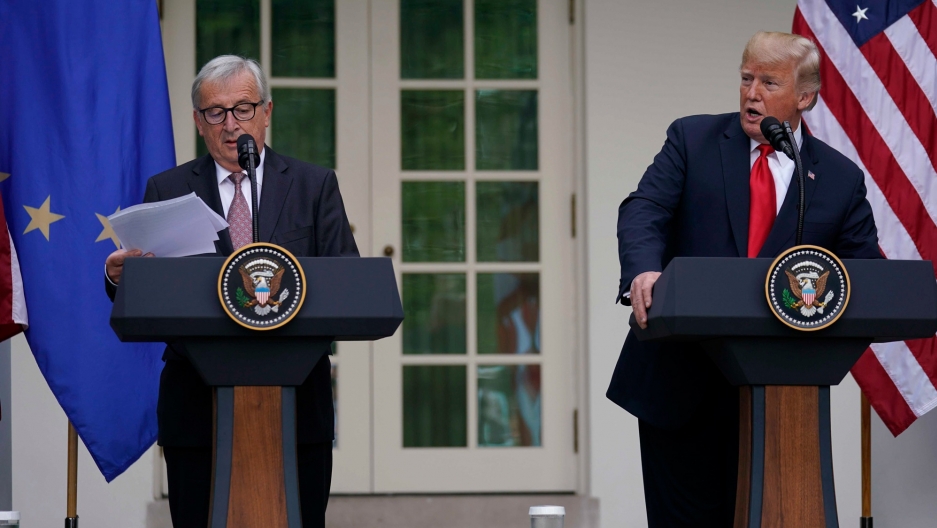 European Commission President Jean-Claude Juncker and US President Donald Trump speak to the news media in the Rose Garden of the White House, July 25, 2018.

After a meeting at the White House on Wednesday, US President Donald Trump and European Commission President Jean-Claude Juncker agreed to refrain from imposing car tariffs and said the talks would also seek to "resolve" US tariffs on steel and aluminum and Europe's retaliatory duties.

The move marked a step back from Trump's signature import protections for American metals producers and potential easing the threat of a transatlantic trade war.

The breakthrough came as the bitter trade dispute between the United States and China appeared to claim a major casualty, with China not approving US chipmaker Qualcomm's takeover of NXP Semiconductors, likely shutting the door on the $44 billion deal.

Qualcomm needed Beijing's okay because China accounts for nearly two-thirds of its revenue, but a deadline at midday on Thursday in Asia passed without word from China's regulator. Qualcomm had said on Wednesday it was dropping the bid.

Trump said Europe agreed to increase purchases of US liquefied natural gas and lower trade barriers to American soybeans, aiding US farmers and the energy sector.

"Soybeans is a big deal. And the European Union is going to start, almost immediately, to buy a lot of soybeans," Trump told reporters after the meeting.

Trump later tweeted that work on documents was "moving along quickly," adding that the meeting with Juncker had "great warmth."

"A breakthrough has been quickly made that nobody thought possible!" Trump wrote, marking a turnaround from July 15, when he called the 28-nation European Union a "foe" on trade.

Juncker said the two sides agreed that as long as they were negotiating on trade, they would hold off on further tariffs, including potential U.S. tariffs on cars and auto parts.

He later told reporters that was a "major concession" on Trump's part and that he expected the US president to follow through on it.

US import tariffs of 25 percent on steel and 10 percent on aluminum imposed in March will remain in place during the talks, but Juncker added: "It is the first time that the Americans agreed to reassess the measure that they have taken in the steel and aluminum sector."

European governments and EU officials hailed the Trump-Juncker agreement as a major success.

The late-afternoon news that the meeting had eased transatlantic trade tensions fed a powerful late rally on Wall Street.

US stocks shot to their highs of the day, with the benchmark S&P 500 Index rising by the most in nearly two months to close the day within 1 percent of an all-time high. The dollar fell, led by a surge in the euro, which has been pressured by the deteriorating trade relations with the EU's largest trading partner.

The Alliance of Automobile manufacturers, a trade group representing both domestic and foreign-brand automakers, welcomed the agreement to hold talks instead of impose tariffs, saying the announcement "demonstrates that bilateral negotiations are a more effective approach to resolving trade barriers, not increasing tariffs."

Trump and Juncker said the US-EU talks would seek to eliminate tariffs, trade barriers and subsidies for non-automotive industrial goods, and cut barriers to transatlantic trade in services, chemicals, pharmaceuticals and medical products.

They also said they would cooperate to reform the rules of the World Trade Organization, which the Trump administration frequently criticizes for favoring US trading partners.

The Commerce Department could recommend new tariffs as early as September after an investigation into whether car imports posed a risk to US national security.

The two leaders did not specifically mention car tariffs in their statements, keeping the focus on other industrial products.

An EU official said there was significant pressure from Trump administration officials to increase EU soybean purchases as part of any trade deal.

US farmers have been hurt by China's retaliatory tariffs on American soybeans amid an escalating trade fight between Washington and Beijing, and Trump has been promising relief. On Tuesday, his administration said it would use a Depression-era program to pay farmers up to $12 billion, easing the pain for a politically important Trump constituency.

"They're going to be a massive buyer of LNG, so they'll be able to diversify their energy supply," Trump said of Europe. "And we have plenty of it."

Asked about the US-EU trade pact, Chinese foreign ministry spokesman Geng Shuang told reporters it would be good for the whole world if the EU and United States could come to terms on their trade disputes, promote freer trade and oppose protectionism.

China hopes the two sides' efforts will conform to multilateral rules, including the principle of non-discrimination, he added.

By David Lawder and Steve Holland/Reuters