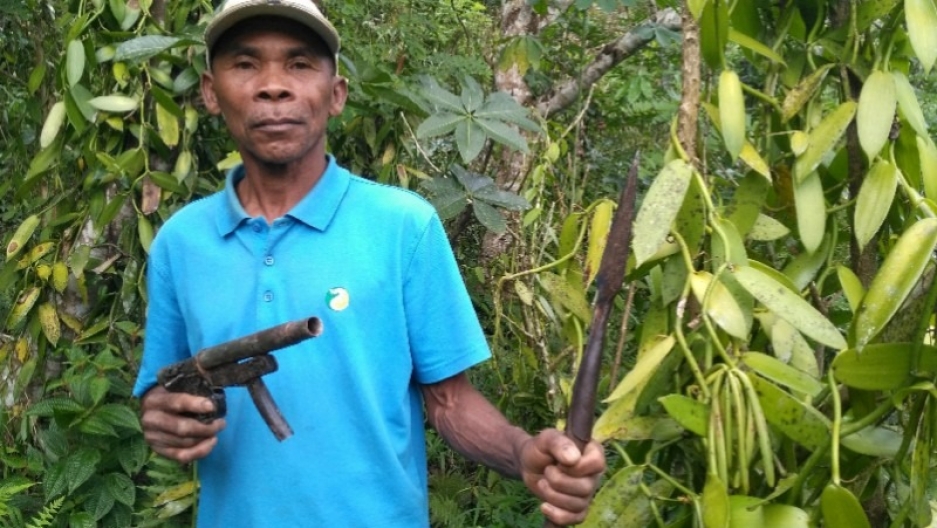 Vanilla farmer Jao Nasaina holds a spear and a handmade gun as he patrols at his plantation, to guard the crop against thieves, in Ambavala, near Andapa, Sava region, Madagascar.

Soaring global prices of vanilla should have been good news for Jao Nasaina, a 58-year-old farmer of the luxury spice on the northeast tip of Madagascar.

Instead, it has brought poverty, stress and sleepless nights patrolling his little patch of jungle with a spear and home-made pistol to ward off the thieves who sneak in to hack off the prized pods under cover of darkness.

Over the last year, police and vigilante groups guarding the northern Malagasy forests of Sava, the world's vanilla capital due to its perfect climate, have caught more than a thousand vanilla rustlers, most of whom are now behind bars, according to local police chief Sirnot Besoa.

Sometimes, however, villagers whose livelihoods depend almost exclusively on the spice used to flavor everything from ice cream to coffee have taken matters into their own hands, beating apprehended suspects to death.

"They cut all the vanilla, the pods. They cut the vines and put all of them in bags. Since then, I am more watchful," Nasaina, who lost his entire crop last year, told Reuters as he sat beside a fire in a clearing in the forest. "I live here now. I hope that this time my harvest will not be lost."

The crime wave started last year when the price of black non-split Madagascar vanilla, the benchmark for the giant Indian Ocean island's leading export, shot up to a record $635 per kilo from just $100 two years earlier.

The surge in prices, sparked by growing luxury market demand for natural, as opposed to synthetic, vanilla, has since eased slightly to $530 but remains high enough for illicit vanilla hunters to take the risk.

"We're armed because the robbers are armed. There's no choice."

A dent in quality

Last year when the thieves first struck, farmers opted to harvest the green finger-like pods early rather than lose them altogether, a logical but ultimately disastrous decision, as the premature cropping led to a steep decline in quality.

Madagascar produces up to 6,000 tons of green vanilla each year, according to the commerce ministry, and last year exported 1,600 tons of processed beans valued at $680 million, the country's biggest export, bringing in more than its nickel and textiles.

It remains well ahead of Indonesia, the number two natural producer, but last year's involuntary early harvest put a dent in its reputation for premium quality 'Tresor de Sava,' built up over more than a century from French colonial times.

The content in the beans of vanillin, the organic compound that gives vanilla its distinctive sweet taste, dropped from the usual 1.8 percent to 1 percent, said senior trade ministry official Josielle Rafidy.

Some overseas buyers even sent their shipments back.

In a coordinated fight-back, police and vigilantes now conduct spot checks around plantations to make sure nobody is sneaking out early-harvested pods that might leach onto the international market and compromise Malagasy vanilla's top-notch brand.

"Pods that are picked prematurely are intercepted and then destroyed," Besoa, the Sava police chief, said.

Unfortunately for farmers, however, the extra security comes at a price, making Malagasy vanilla less competitive against Indonesian varieties or the synthetic vanillin that dominates the global food industry.

"Vanillin extracted from other products such as cloves or other species is starting to gain a foothold and to interest buyers in the international market," Rafidy, the trade official said.