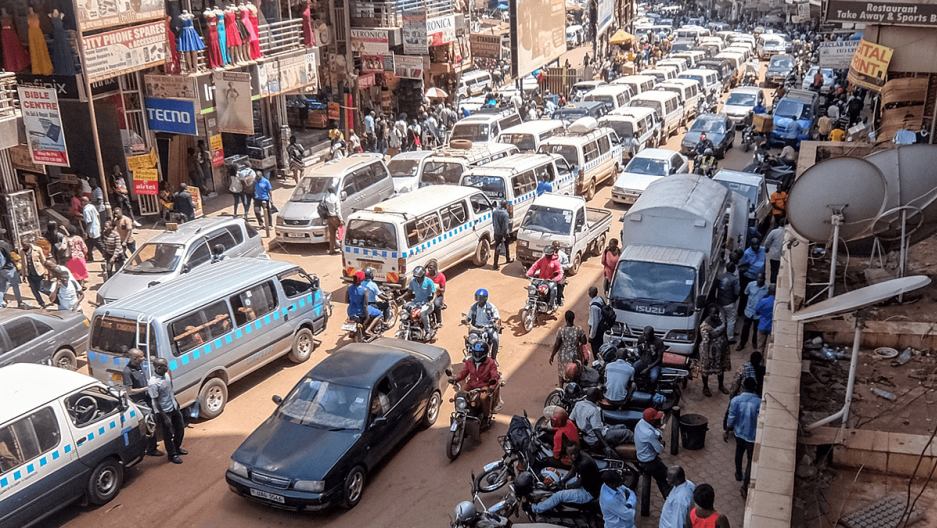 Uganda is notorious for traffic jams and chaotic driving, but a new social media campaign publishes photos of the city’s worst drivers.

Hilda Twongyeirwe has been driving the unruly streets of Kampala, Uganda’s capital, for years. Today, as she turns the key to start her daily commute, she says she is newly committed to being a better, more patient driver.

Drivers throughout the capital are crediting the newly launched Stay in Your Lane campaign, which uses social media to name and shame bad drivers, for their renewed efforts to follow basic rules of the road.

“It has raised more awareness that we should be more patient with each other,” Twongyeirwe says. “With the naming and shaming on social media, you don’t want to be the one out of order.”

Twongyeirwe says the campaign has empowered her to reprimand fellow drivers, too.

“It gives me courage to tell someone, ‘You are out of your lane,’” she says.

In April, the Nation Media Group launched the Stay in Your Lane campaign, which publishes on social media photos of drivers and vehicles that violate traffic rules. The public is encouraged to submit via a WhatsApp channel photos of drivers who are breaking the rules or engaging in dangerous behavior. The Nation Media Group publishes the vehicle’s license plate number and the street, time and date of the violation. It is also working with the Uganda Revenue Authority, which manages license plate registration, to obtain the names of vehicle owners featured in the campaign, so that police can apprehend the most serious offenders.

The most common offenses published include driving on the shoulder, forming illegal lanes and making turns from center lanes.

Traffic accidents are the seventh-leading cause of death in Uganda. Uganda has the highest rate of road deaths in East Africa and ranks high above the global average. This lawless driving, for which Uganda has become renowned, comes with a price. The country loses more than 3 billion Ugandan shillings (about $785,000) annually from lost productivity due to injuries and deaths resulting from motorcycle-taxi accidents, according to a 2015 study by Richard Sebagala. 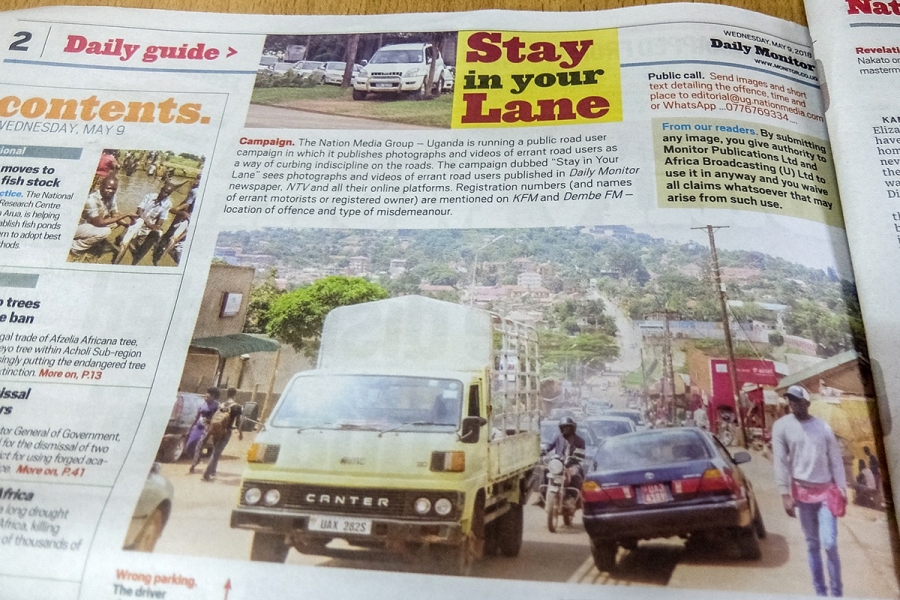 In addition to publishing photos of bad drivers, the Nation Media Group will post traffic rule reminders through a driver education campaign.

“We have had people send in photos from across the country, and the campaign will go on for the next three months,” says Eric Dominic Bukenya, multimedia editor at Monitor Publications Ltd., which is part of the Nation Media Group. Bukenya says he is optimistic that the campaign will have positive results.

“Here in our neighborhood, even during traffic jams in the evening, drivers no longer drive on pedestrian walkways or make U-turns in the middle of the road, as they used to before,” he says.

Charles Ssebambulidde, a traffic officer and road safety spokesperson, says he is glad to see a media collaboration that is getting Kampala’s chaotic roads under control. So far, he says, it’s working.

In the coming months, he says, police will be adding more closed-circuit cameras on the streets to track problem areas. The Nation Media Group will also launch a driver education campaign that will post information about who has the right of way, as well as post reminders about common road signs.

Still, some skeptics think that the campaign won’t change things in the long term.

Ruth Kyomuhangi, a businesswoman in Kampala, says she fears that high levels of corruption in the police department will undo the campaign’s positive results.

“I doubt it will work. The drivers will pay off the police, as usual, and get away with bad driving. This is Uganda,” she says.