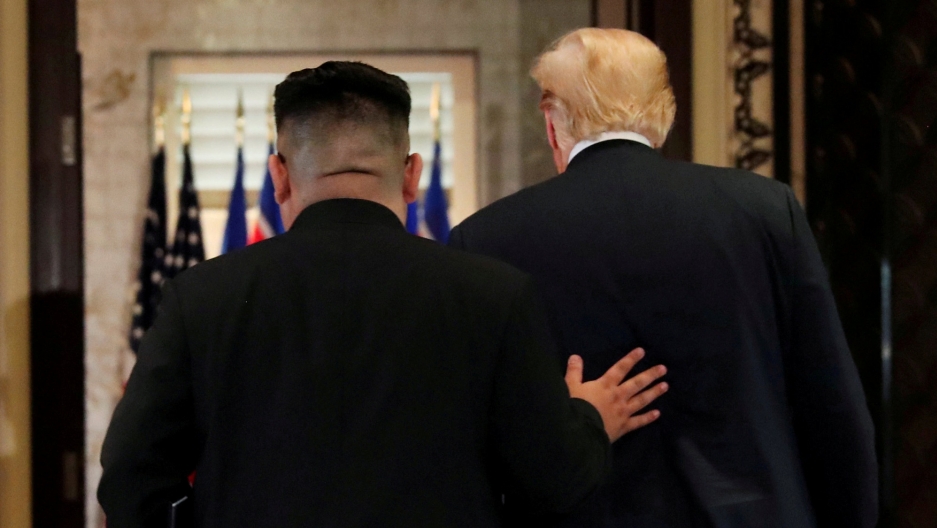 US President Donald Trump and North Korea's leader Kim Jong-un after their summit at in Singapore, June 2018.

When North Korean leader Kim Jong-un agreed in June to help return the remains of American troops killed in the 1950-53 Korean War, it was seen as one of the more attainable goals to come out of his summit with US President Donald Trump.

American officials expect North Korea to hand over around 50 sets of remains in coming weeks, but the drawn out process of negotiations to get to this point highlights the complications involve in the issue.

At the heart of the difficulty, former officials involved in previous recovery missions say, are likely demands from North Korea for cash compensation, as well as the unsolved tensions over North's nuclear weapons and ballistic missile arsenal.

More than 7,700 US troops who fought in the Korean War remain unaccounted for, with about 5,300 of those lost in what is now North Korea, according to the Defence POW/MIA Accounting Agency (DPAA), the US military agency tasked with tracking down prisoners of war and troops missing in action.

The Korean War ended in a truce, not a peace treaty, leaving the United States and North Korea still technically at war.

Soon after the June summit, Trump announced North Korea had returned the remains of 200 soldiers that had already been found. However, negotiations over the actual handing over of the remains have dragged on.

"The North Koreans are using the remains issue as a bargaining chip," said Bill Richardson, a former US diplomat with experience negotiating with North Korea, including during the recovery of the remains of seven Americans in 2007.

"They're stalling," he told Reuters in an interview by phone. "I think in the end the North Koreans will turn over the majority of the remains that they have — but it will have a price. Not just a financial price."

Between the 1990 and 2005, more than 400 caskets of remains found in North Korea were returned to the United States, and the bodies of some 330 Americans were accounted for, according to the DPAA.

Decades-old remains that North Korea has handed over in the past have not always been identifiable as US troops.

The US and North Korea worked together on so-called joint field activities (JFAs) to recover remains from 1996-2005, until Washington halted operations expressing concerns about the safety of its personnel.

A Congressional Research Service (CRS) report said the United States paid $28 million to North Korea for assistance in the effort.

"To the best of my knowledge, it was never based on a per body calculation. Payments were made in support of each field mission — each joint recovery operation," said Frank Jannuzi, a former Democratic Senate Foreign Relations Committee staffer focusing on East Asian and Pacific affairs. Payments were to compensate North Korea for direct expenses incurred such as fuel costs, disruption of agricultural planting, or equipment costs, he said.

In 2011, Barack Obama's administration agreed with Pyongyang to restart recovery missions, offering to pay $5,669,160 in "compensation" for services provided by North Korea.

Those planned missions never happened, however, as the Washington called off the deal after North Korea tested a rocket in early 2012, said Paul M. Cole, author of "POW/MIA Accounting."

Former officials say typically North Korea has not asked for compensation when it unilaterally returns remains it recovers, such as the roughly 200 currently being discussed.

But if the United States hopes to send its own teams into North Korea, there will likely be a cost.

Asked whether the cost of future joint field activities would be similar to what was paid in the past, the Pentagon's DPAA Public Affairs Office said: "As of yet, there are no JFAs scheduled in North Korea so we cannot speculate on what such activities may cost."

The US State Department did not have an immediate comment on the negotiations, but Secretary of State Mike Pompeo said in June, North Korea had made a commitment to unilateral return the first remains "in the next couple weeks".

According to CRS, the United States also paid for recovery operations in Vietnam. As with North Korea, critics complained the Vietnamese government charged "extraordinarily high fees for providing support ... and that the services received are by no means as lavish as the bills presented indicate."

South Korea's former Vice Minister of Foreign Affairs and Trade Kim Sung-han said Pyongyang would likely want to use the return of remains to improve its relations with Washington, while avoiding addressing more touchy subjects such as denuclearization.

"North Korea wants the war declared ended sooner rather than later so trust can be built and progress on its international standing can be made," he said, adding that any "reimbursements" were likely to violate sanctions.

Besides being politically sensitive, however, handing the North Korean government stacks of cash offers no guarantee that authenticated US servicemen's remains would be recovered, Jannuzi said.

"We might spend a million dollars and come up with nothing."