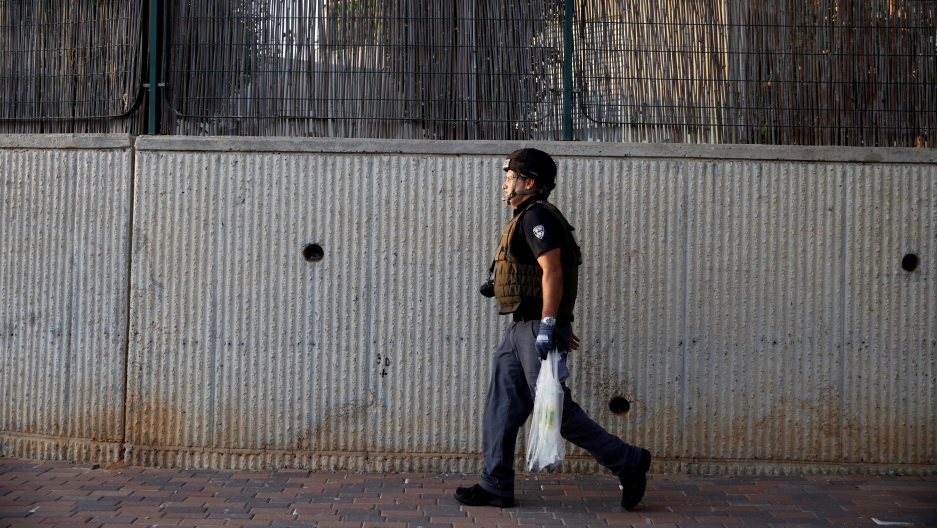 An Israeli policeman walks at the southern city of Sderot, on the Israeli side of the Israel-Gaza border July 14, 2018
Credit:

The United States could apply some of the security measures used for Israel's border with the Gaza Strip to its own frontier with Mexico, an Israeli cabinet minister said on Tuesday.

Public Security Minister Gilad Erdan last month hosted his US counterpart, Homeland Security Secretary Kirstjen Nielsen, among aides to President Donald Trump who have been tasked with making good on his vow to clamp down on illegal immigration.

To that end, Trump says the United States needs a wall along its 2,000 mile-long border with Mexico. But he has been stymied by domestic dissent and uncertainly about funding.

During her visit to Israel, Nielsen inspected the hi-tech fences it has used to seal off the 143-mile Egyptian frontier as well as its 37-mile boundary with Gaza, a Palestinian enclave controlled by Hamas Islamists.

"She told me there is certainly a lot to learn here, and I reckon that some of this will certainly be implemented in what the United States is setting up on its border with Mexico," Erdan told Israel's Ynet TV in an interview near Gaza's border.

Among Israeli technologies that he said Nielsen had looked at was an underground wall designed to block Hamas attack tunnels and early-warning systems for foiling incursions.

The US Embassy in Jerusalem had no immediate comment.

After her Israeli border tour on June 12, Nielsen said in a Jerusalem speech: "Border security is national security. Our Israeli partners know that better than anyone and I was fortunate today to see the incredible work they’re doing to keep their territory and citizens safe.”

The Gaza-Israel border has seen weekly, sometimes violent Palestinian protests since March 30. The Israeli military has killed more than 140 Palestinians during the protests, saying lethal force was needed to prevent armed infiltrations. The death toll has drawn foreign censure though not from Washington, which has echoed Israel in saying Hamas was to blame.