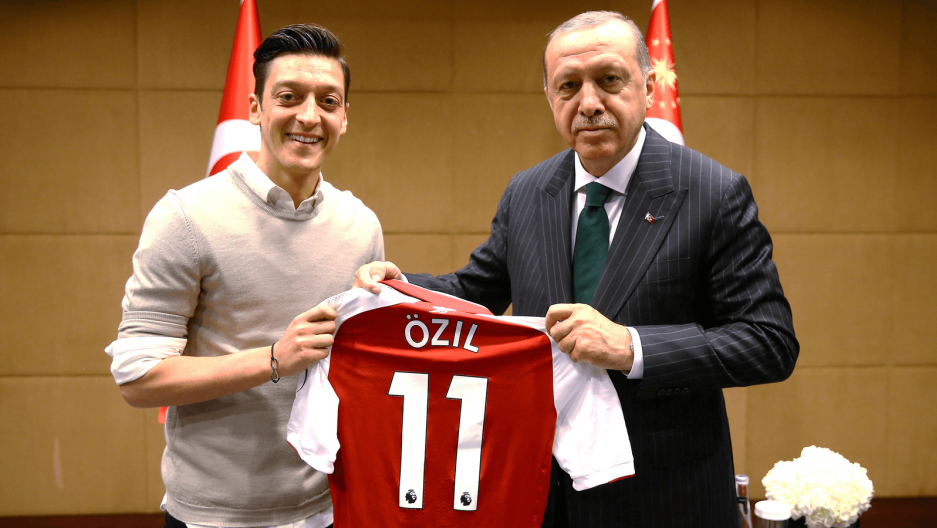 Turkish President Tayyip Erdoğan meets with Arsenal's soccer player Mesut Özil in London, Britain May 13, 2018. This is the image that caused controversy in Germany.

German soccer star Mesut Özil's decision to quit the national team due to "racism and disrespect" he faced over his Turkish roots triggered a bad-tempered public debate on Monday about the country's relations with its largest immigrant community.

The most prominent German politician of Turkish origin said it would be difficult for the head of the national soccer association to stay in the role, adding that Özil's departure would only be welcomed by those who opposed diversity.

Özil's announcement on social media late on Sunday led national newspapers to clear their front pages for the midfielder, 29, a key member of Germany's World Cup-winning side in 2014 — and also of the side eliminated at the group stage of the 2018 tournament in Russia. He explained in his tweet that he took the photo to show respect for his roots.

The past couple of weeks have given me time to reflect, and time to think over the events of the last few months. Consequently, I want to share my thoughts and feelings about what has happened. pic.twitter.com/WpWrlHxx74

But it caused a lot controversy. The player, who came under fire for having his photograph taken with Turkey's authoritarian President Tayyip Erdoğan in May, was especially piqued by criticism from German Football Association (DFB) head Reinhard Grindel, who he said blamed him for Germany crashing out of this year's tournament.

"We emphatically reject the DFB being linked to racism," the DFB said in a statement. "The DFB has been very involved in integration work in Germany for many years."

Özil, who plays for English club Arsenal, said Grindel had blamed him for Germany's poor performance at this year's World Cup, considering him a German when the side won and an immigrant when they lost.

Cem Özdemir, the former head of the Greens party and the most prominent politician of Turkish background, said it would be difficult for Grindel to do his job in future given the diverse reality of Germany and its soccer team.

"It will be very hard for Grindel after this," he told Deutschlandfunk radio. "He doesn't reflect the breadth of football in Germany and so it will be hard for German Turks, or indeed German Croats, to feel that the DFB is theirs."

Gokay Sofuoglu, leader of the Turkish community in Germany, called for Grindel to resign, adding: "Diversity in the national team was a great showcase project that is now at risk of failing due to incompetent leaders."

Former DFB President Theo Zwanziger was quoted in German media as saying the DFB had not done enough to solve conflicts ahead of the World Cup.

"Communication mistakes mean something happened that should never happen to migrants: They should never feel like second-class Germans," he said, adding: "Özil's resignation is a major setback for integration efforts beyond football in our country."

The DFB said it regretted Özil's departure but rejected his accusations of racism, saying it had for years helped to integrate people with migrant backgrounds and would continue to do so, adding: "The DFB stands for diversity."

Kevin Hatchard, a TV commentator for Germany’s Bundesliga, quotes Özil saying, “when we win I’m a German, when we lose I’m an immigrant.’’

Hatchard continues: “He’s become something kind of a scapegoat. … I think the questioning of his loyalty has been frankly outrageous. This is somebody who has really given a lot to the German game and for him to be have been questioned in the way that he has been questioned, for his loyalty to have been impugned in the way that it has, I think it’s outrageous, and I totally understand why he feels like he has to walk away at this stage. It’s a real tragedy for German football, because he has been a titan for German football in the last few years.’’

A spokeswoman for Chancellor Angela Merkel said on Monday that most of the roughly three million people with Turkish roots living in Germany were well-integrated.

She said Germany was a "cosmopolitan country" where people with migrant backgrounds were welcome and sport played a big role in integration. Merkel valued Özil as a "great" footballer who had done a lot for the national team, and she respected his decision to quit.

“You’ve got a guy who was very much held up as a great example of integration," Hatchard says. "And people will wonder if this walking away that Özil is doing from the German national team is a symbol of something greater that is happening in Germany right now. It’s a very, very disappointing and worrying situation.’

“There’s clearly an issue here, with players of dual nationality, which reflects tensions and problems in society, as a whole.’’

The row coincides with a testy political debate in Germany about an influx of 1.6 million migrants since mid-2014 that has seen a rise of the far right Alternative for Germany (AfD) party at the expense of traditional parties.

It also exposed differences of opinion over the country's large and well-established Turkish community.

Hundreds of thousands of Turks came to Germany in the 1960s to help it tackle a shortage of labor as "guest workers" but little attempt was made to help them learn German and integrate.

A survey by the WZB Berlin Social Science Center in June showed people of Turkish descent, like other groups with migrant backgrounds, suffered discrimination when they applied for jobs.

Just as 2014's victorious German side was celebrated for its diversity, so too was France's World Cup-winning team in 2018 for having numerous key players with African ethnic roots.

German soccer star Jerome Boateng, born in Berlin with a Ghanaian father, tweeted a photo of himself with Özil and wrote: "It was a pleasure Abi". "Abi" means brother in Turkish.

But German Foreign Minister Heiko Maas questioned the debate around Özil, saying: "I don't believe the case of a multimillionaire living and working in England gives much insight into the success or failure of integration in Germany."

British anti-discriminatory body Kick It Out said the "racist treatment" Özil had received at the hands of media, supporters and society was disappointing but reflected what a number of footballers with mixed heritage in Europe faced.

Özdemir said that even if Özil had been naive, however, his departure would be "good news for Erdoğan, for the AfD, all those who are against diversity."

In Turkey, however, politicians heaped praise on the player and lashed out at those who had abused him.

"What Mesut Özil went through and how he was treated is unforgivable. There is NO excuse for racism and discrimination," Gulnur Aybet, a senior adviser to Erdoğan wrote on Twitter.

Özil's main sponsor, Adidas, said it would stand by him.