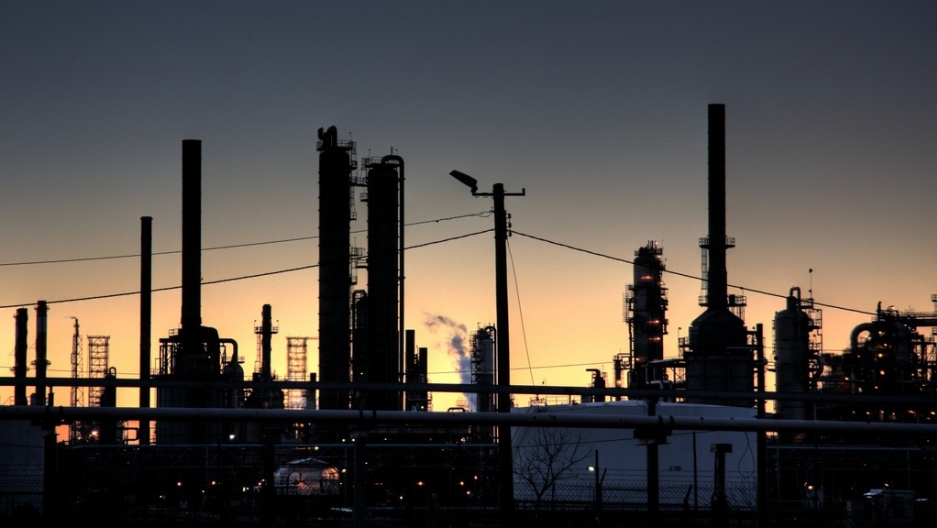 Under a new carbon offset program that is gaining popularity in Congress, oil and gas companies — and other manufacturers of products involving — fossil fuel would have to pay $40 for every ton of carbon emitted into the atmosphere. The companies would be charged on site, such as refineries as this one.

Partisan unity is a rare sight in Washington, DC, these days.

Yet a bipartisan coalition of congressional members has begun to pledge its solidarity to a political effort that could address one of the more hot-button topics on the Hill: climate change.

The group calls themselves Americans for Carbon Dividends. It is led by two former US senators: Sen. Trent Lott, a Republican from Mississippi, and Sen. John Breaux, a Democrat from Louisiana.

At the root of its premise is charging a carbon offset fee of $40 for each ton of carbon that is emitted into the atmosphere. It would be charged at mines, refineries, wells and ports throughout the country — or anywhere else carbon is being emitted. The money collected would then be returned to the American people as dividends.

Breaux says the money collected could lead to the average American family of four people receiving $2,000 annually. The Social Security Administration would distribute the dividends. The $40 fee would increase over time, providing more incentive for giant carbon-emitting companies to find innovative ways to reduce their carbon footprint.

“We think it is the best of both worlds,” Breaux says. “We feel that it would get the job done.”

‘A chance of getting something done’

Breaux lists some of the climate agreements and acts that have not been able to work over the past 30 years when it comes to US involvement: the Clean Air Act of 1963, the Kyoto Protocol in 1997 and, most recently, the Paris Agreement of 2016. He says a market-oriented plan to fight climate change has just the right blend of appealing to conservatives — who shy away from the word “tax” and large governmental regulation on matters such as this — and liberals who want some type of governmental action in place.

“We've tried a whole bunch of different approaches — more regulations from the government to try and limit the amount of carbon we emit into the atmosphere — and so far nothing has worked very well,” Breaux says. “So, we decided that this method … is a way to get both sides to come together and actually have a chance of getting something done.”

Breaux spent a total of 33 years in Congress, starting out in the House of Representatives in 1972 before heading to the Senate in 1987. He grew up on the Gulf Coast of Louisiana. He says he saw a little bit of his coastline disappear each year — knowing as a young man that there was a problem that needed to be solved.

He is confident that there are enough Republicans and Democrats on board to actually draft up a piece of legislation — and get it passed — after the 2018 election. Those who have already expressed interest in making something happen include Democratic Sen. Sheldon Whitehouse of Rhode Island, Republican Sen. Lindsey Graham of South Carolina and Republican Rep. Carlos Curbelo of Florida, who co-chairs the Climate Solutions Caucus.

“This is not going to be a sprint. I mean, I think it's more of a marathon. I mean, I don't want to have something just thrown out on the floor, and if people don't understand it, they're not going to vote for it,” Breaux says. “But if we can help educate them about what we're talking about and it's a less regulatory, less government-intrusive, free-market type of an approach which has environmental groups supporting it — well, then we have, I think, a very sound basis to move forward with something that could work.”

Besides members of Congress, Breaux says the initiative, which is tied to the Climate Leadership Council, has also received support from several massive oil and gas companies, including ExxonMobil, Total S.A. and Royal Dutch Shell.

“I think they recognize that something needs to be done,” Breaux says. “And to their credit, they have become corporate founding members of this effort.”

On the other side, Breaux says the plan also has the support of large environmental groups such as The Nature Conservancy and Conservation International.

“It’s a relatively unique combination that we have behind us and supporting us in this effort,” he says.

Furthermore, the carbon offset program would also feature a border carbon adjustment. It would work by mandating any country that is trying to export its product into the US to pay a similar fee that is charged in the US to offset carbon emissions — if the products are coming from a country that does not have a similar type of carbon offset program.

“I think it's fair,” Breaux says. “We're not doing something unilaterally, but trying to get all the countries of the world working together under our plan.”

This article is based on an interview that initially aired on PRI’s “Living on Earth” with Steve Curwood.