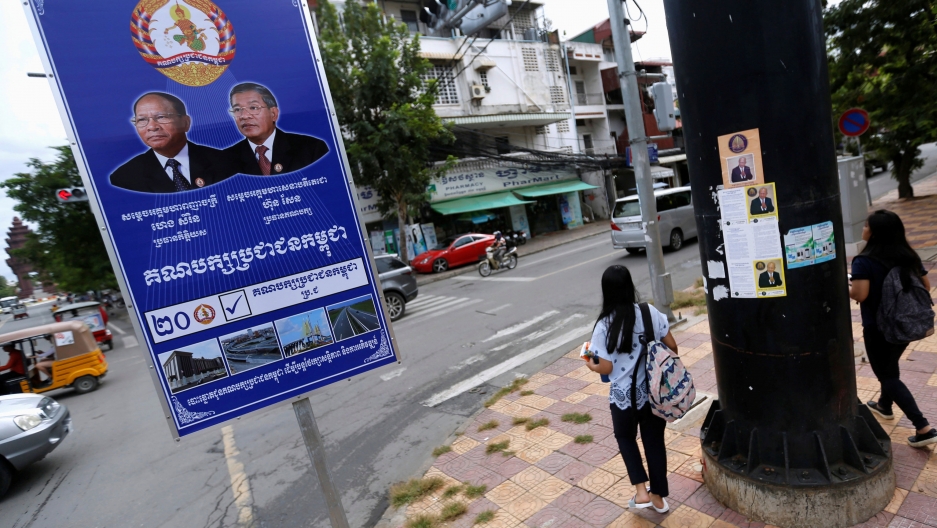 Posters of the Cambodian People's Party (CPP) and FUNCINPEC Party are seen along a street in Phnom Penh, Cambodia, in mid-July. An election is scheduled for July 29, but members of the opposition party say they've been silenced. Some efforts are underway to encourage a poll boycott, which the government says are illegal and has invited 50,000 observers, including some from China, Myanmar and Singapore, to monitor the election.

In June last year, Khoeun Virath was elected as a commune councilor in the capital of Cambodia, but months later his political party was banned and most of its leadership fled into exile — so now he works as a tuk-tuk driver to make ends meet.

Virath's story is just one example of how a once-thriving opposition has been silenced and pushed underground by long-serving Prime Minister Hun Sen and his allies ahead of a general election set for July 29.

The government denies it has set out to sideline critics.

"We have never banned criticisms but we ban insults and incitements because in an election situation, people need security physically and mentally," government spokesman Phay Siphan said.

Hun Sen, who has ruled this Southeast Asian nation for over  30 years, has had virtually no opposition since November when the opposition Cambodia National Rescue Party (CNRP) was dissolved by the Supreme Court at his government's request. CNRP was narrowly defeated in a 2013 general election.

Amid condemnation from the international community, CNRP leader Kem Sokha was jailed last year on treason charges and almost 5,000 local authority positions his party had won were handed to members of the ruling Cambodian People's Party (CPP).

"Inside the country, (CNRP members) are completely cut-off from communicating with each other," 30-year-old Khoeun Virath said while in a cafe in Phnom Penh in what was once his constituency. "There is no leadership structure left."

Many Cambodians are afraid to speak about the election, fearing their views could land them in trouble. Hun Sen has accused the United States of supporting the CNRP and plotting a "color revolution" to overthrow his government.

Hoping to expose the election as flawed, opponents of Hun Sen have launched a campaign urging Cambodians not to vote.

"People here are afraid, people don't want to speak out," said Khoeun Virath, who said he has been followed by plainclothes police many times.

The government says calls for a poll boycott are illegal and has invited 50,000 observers, including some from China, Myanmar and Singapore, to monitor the election.

Soeung Sen Karuna, 41, an investigator for rights group Adhoc, one of the oldest rights groups in Cambodia, said his organization had been accused of plotting a revolution and was finding it increasingly difficult to work.

"NGOs who work in other sectors are scared of cooperating with us," he said at Adhoc's office in Phnom Penh.

Five members of Adhoc were detained without trial for 14  months before being released on bail last year. They were charged with bribing a witness in a case against the now-jailed opposition leader, Kem Sokha. Supporters of Kem Sokha say the charges are politically motivated.

Another person who knows the lengths to which authorities will go to silence critics is Ma Chetra, 28, who runs the Social Breaking News Facebook page, said he has also been targeted by the government over the page, which hosts news about land-rights protests, forced evictions, and other issues the government considers sensitive.

Ma Chetra said he has fled Cambodia several times since 2017 after police sent a photograph of him with a group of activists at Phnom Penh's international airport. The activists were heading to Indonesia for a workshop on democracy, he said, but police circulated the image with the caption: "A group of youths who went to train to conduct a color revolution."

The photograph lists the names and some of the mobile phone numbers of those on the trip.

Some of the group have since fled to the United States and France. Others are in Cambodia, but are keeping a low profile.

With less than a week to go before the election, Phnom Penh is festooned with posters urging Cambodians to vote for Hun Sen but there are none for the small opposition parties, and there are few signs of the excitement that usually precedes an election.

Back at the cafe, Khoeun Virath said the best hope for opponents of Hun Sen is pressure from exiled leaders and the international community. "With diplomatic pressure from abroad there can be a lot of momentum," he said.