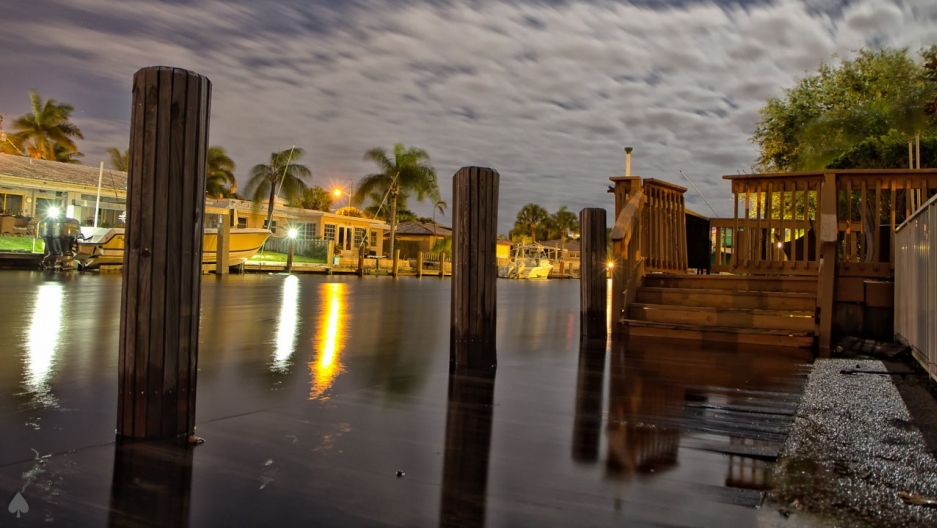 Growing high tides have turned scenes like this photo — taken from Pompano Beach, Florida, after Hurricane Sandy in 2012 — into a regular occurrence along US coastlines.

When it comes to the sea level rise caused by global warming, there appears to be a misnomer floating around the collective conscience of most Americans, says Gregory Dusek.

“I think a lot of people think of sea level rise as something that's not going to be impacting us for some time,” says Dusek, who serves as the chief scientist of the National Oceanic and Atmospheric Administration (NOAA)’s Center for Operational Oceanographic Products and Services.

“Often it's referred to 2050 or 2100 as to when we'll start seeing impacts. But really, high tide flooding is the first evidence that people are seeing of sea level rise, and it's happening right now. And so, we're trying to capture the change that's been occurring in high tide flooding, both in the recent past and in the near future.”

Dusek and his colleagues at NOAA recently released their annual tidal flood report based on the data that they collected in 2017 from more than 200 real-time gauges located across the country’s coastline — some of which have been operating since the 1800s.

The team’s report states that across the nation, there has been a doubling, on average, of the number of days of high tide flooding over the past 30 years. Furthermore, there has been a 50 percent increase from the past 20 years.

The high tide flooding that Dusek refers to is not necessarily as serious as something like storm surge flooding. Instead, it would be classified by what is known as nuisance flooding or sunny day flooding, where even with a bright blue sky ahead, the storm-draining system backs up and potentially affects drinking water and workers’ daily commute.

The Northeast was hit particularly hard by high tides due to the Nor'easter season, Dusek says, while the East Coast and Gulf Coast endured more high tides than in years past that appeared in the wake of a string of powerful hurricanes.

Looking ahead, Dusek says that El Niño could have a significantly bigger impact on the tide levels on the West Coast.

Out of all the gauges that the NOAA has relied upon over the years, Dusek and his colleagues are paying particular attention to those located along the East Coast. He mentions the story of Charleston, South Carolina, where there a tide gauge has been gathering data since 1921. The city would only have one day of flooding a year about 30 years ago. Now, that is far from the case.

“We had one high tide flood in the first 14 years at Charleston, and it was caused by a catastrophic hurricane, and now we see it four times a year or more,” he says. “And so, the water levels that used to take a once-in-a-decade storm now occur just from normal weather and multiple times a year.”

Stories such as the one taking place in Charleston, Dusek says, points to a troubling trend of major urban areas located along coastlines facing flooding on a regular basis.

“We're headed towards flooding of every other day, 180 days per year, especially by 2100. In 2100 — even at the intermediate low scenarios — most places in the Northeast Atlantic, Southeast Atlantic and the [Gulf Coast] will be seeing flooding every other day,” Dusek says. “It's definitely going to be a reoccurring problem that people are going to have to deal with. And it's going to get more frequent and it's going to get worse in terms of its magnitude.”

One of the main reasons the NOAA publishes the report, Dusek says, is to allow Americans — and city planners, in particular  — the ability to see far into the future to prepare for the appropriate steps.

“The idea is that hopefully they will take this and incorporate this in their planning moving forward,” Dusek says, “especially if we want to avoid cases where we're going to have water in the streets almost on a weekly — or even more — basis.”