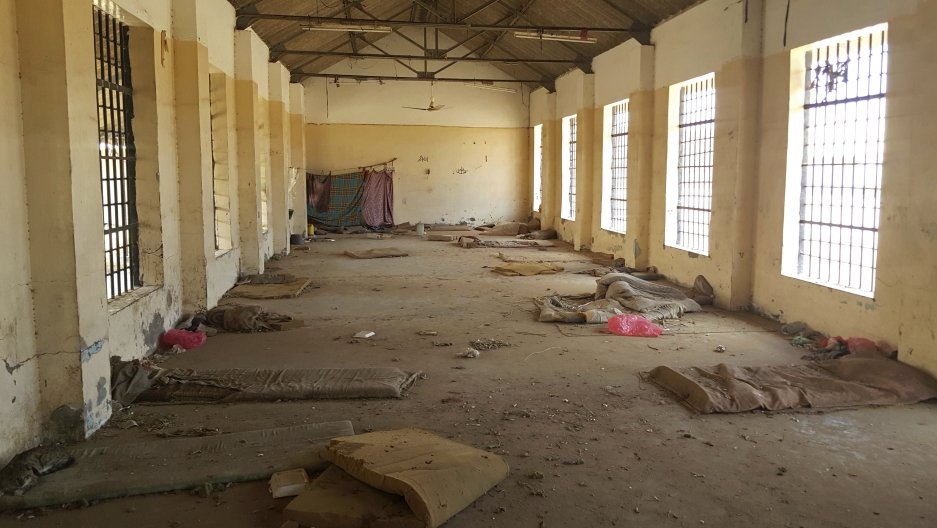 A deserted cell in the public section of Aden Central Prison is shown in this May 9, 2017 photo in Aden, Yemen. A separate, closed wing is run by Yemeni allies of the United Arab Emirates.

A new report confirming prisoner abuses in southern Yemen is amping up concern in Washington, DC. The report by Amnesty International, which details possible war crimes by a US ally in the region, is fueling debate over the US role in the Yemen war.

"We wanted to see what has happened one year after a network of secret prisons had been revealed in southern Yemen," says Rawya Rageh of Amnesty International. The human rights group's four month investigation examined alleged abuses in the prisons, which have been operated by UAE forces and the local Yemeni forces they support.

The report showed that a number of the facilities continue to operate outside of official Yemeni government oversight.

"One year later dozens of families are still desperately looking for their loved ones."

Since 2017 scores of men in southern Yemen have been arrested, detained and in some cases disappeared into a shadowy system of prisons — the Associated Press identified 18 — where they may experience interrogation, torture, isolation and deprivation of basic human needs. Investigations by the AP, Human Rights Watch — and now, Amnesty International — reveal that the prisons have been operated by Yemenis under the authority of the United Arab Emirates, which has projected its military and political power across the southern half of Yemen.

Unlawful detention is commonplace in Yemen. The rebels that the UAE seeks to defeat, Ansar Alllah, also known as the Houthis, began detaining and torturing Yemenis as early as 2014. They still do.

Rageh says the Amnesty report is not meant to excuse Houthi abuses. “What this report looks at specifically are the violations that came into existence after the involvement of UAE troops and the creation of the forces that they back,” says Rageh.

“We documented torture and ill treatment at the hands of both the UAE troops, as well as the local Yemeni forces they back,” says Rageh. “The forms of torture that we documented included electric shocks, waterboarding, denial of timely medical treatment, sexual violence.”

The Associated Press reports that a US ally, the United Arab Emirates, has been involved in the torture of detainees in a network of secret prisons in southern Yemen. We spoke to AP reporter @mokhbersahafi on what she learned. Full audio: https://t.co/ch6WNqZCgK pic.twitter.com/rjfsvThlZy

In the new report, Amnesty independently verifies the AP report of a controversial raid in March 2018 by UAE military forces on a prison in the port city of Aden. At the facility known as Bir Ahmed II, the Amnesty report says UAE forces demanded that prisoners strip naked and undergo cavity searches under the pretext of looking for smuggled cell phones. “Those who refused,” says the report, “were beaten up and intimidated with police dogs.”

UAE officials sought to distance themselves from the controversy, issuing a press release that criticized the Amnesty and AP reports, neither of which focused on the stated Emirati goal of stabilizing Yemen. "The UAE believes that these reports are politically motivated,” the release said, “to undermine its efforts as part of the Arab Coalition to support the Yemeni Government.”

The reports’ impact can be seen in Washington, DC, where US involvement in the Yemen war is being debated.

“The news now of the torture happening in these prisons is, frankly, just going to further radicalize the Yemeni people,” says US Senator Chris Murphy (D-CT) — especially those who have been in the prisons or know those who are in the prisons. Murphy says the forced detentions will engender resentment among Yemenis “against a coalition government that may eventually be formed — and against the United States.”

Murphy has campaigned to limit US involvement in the Yemen war since 2015. In March that year Washington gave its blessing — and support — to a Saudi-led effort to roll back the territorial gains of a Yemeni rebel group that had overthrown the internationally recognized government of Yemen and seized control of the country’s major cities.

Murphy indicates that he thinks US support for the Saudi-led coalition is bound to backfire.

An official from the US State Department expressed concern about the now well-documented abuses attributed to the UAE.

“These allegations are disturbing,” the official told PRI. “The United States takes all allegations of abuse seriously. We call on all parties to the conflict, including the UAE, to treat prisoners and detainees humanely and to ensure that allegations of abuse are investigated quickly and thoroughly. All parties must act in accordance with international law, including human rights law and the laws of armed conflict.”

The official acknowledged the diplomatic challenge that involvement in the Yemen war presents to the US and its allies. “The UAE is a strong partner of the United States,” the official concluded. “We have regular discussions with them on many issues, including this.”

Murphy is unimpressed. “I read the statements from the State Department as almost totally completely empty words,” he says. “Personally, I know there are people in the State Department who think that our policy is wrong there. But they are working for a president who has decided to cast his lot with the Saudis despite the war crimes that they are perpetuating inside Yemen today.”

Murphy has sponsored three attempts in the Senate to limit or end US support for the Saudi-led coalition which has — in addition to the unlawful detentions attributed to the UAE — conducted more than 100,000 air raids on Yemen, many of which have resulted in civilian deaths.

Murphy believes legislation limiting US involvement in Yemen could be passed. “But,” he says, “even if we were able to get the votes in the Senate and the House, if we were able to forward a piece of legislation to President Trump to limit our participation in this civil war, there's no sign that he would sign it, because he has been the chief cheerleader of the Saudis. He has frankly increased our participation in this war, not decreased it.”

Amnesty International addresses part of its report directly to US leaders, who weigh the benefit of a military and strategic partnership with the UAE against the risk of disruption by criticizing it.

It calls on them to refrain from receiving information likely to have been obtained through use of torture, to promote compliance with humanitarian law and to facilitate oversight of detention activities in Yemen. It also recommends that the US Investigate the role of its military or intelligence personnel in detention-related abuses and ensure that any forces in Yemen with whom the US is cooperating with receive training in humanitarian law.

"If the parties want to show a genuine willingness to end this," says Rageh, “then what we need to see is an investigation into these violations. International community members with sway — like the United States and others — should be encouraging and pressuring these parties to conduct this investigations.”