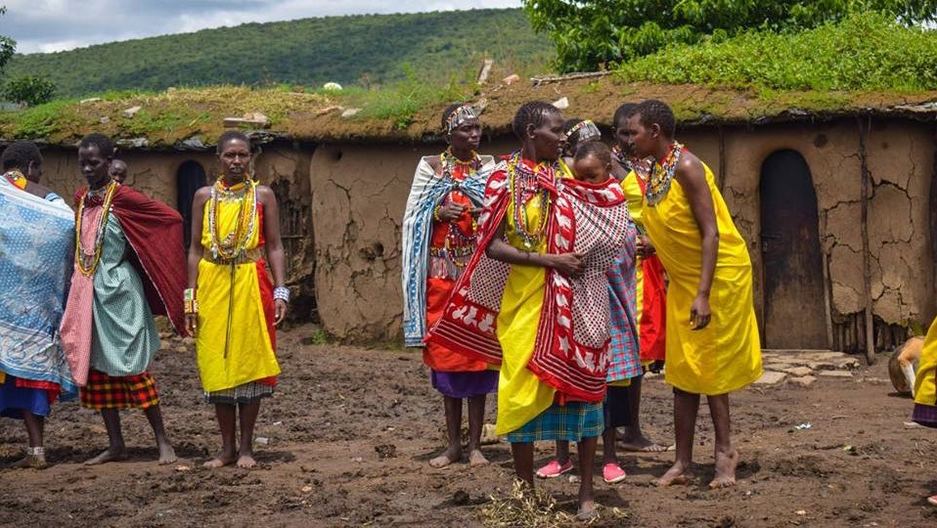 Maasai women stand outside their house in northern Kenya. Traditionalists from neighboring Uganda have now shifted to circumcising married women due to the strict government laws.

That's because the procedure, better known as female genital mutilation (FGM), now gives her standing in her village of Kapchorwa in eastern Uganda.

“I’m very happy because I’m now a full and respected woman in this community,” said Chemtai, mother of two, smartly dressed in a red and black robe. “I can speak in a meeting, and people listen to me. I now enjoy the privileges of being a [proper] woman of this community.”

Chemtai is one of the tens of thousands of married women in this part of the country who are secretly undergoing circumcision — a crude surgery often done in unsanitary conditions involving the removal of the labia and most of the clitoris — which is illegal in Uganda.

A survey last September by the Ugandan Reproductive Educative and Community Health Programme (REACH) on prevalence of FGM in eastern Uganda showed that while 24 percent of girls between the ages of 10 and 14 have undergone the procedure, 76 percent of women between 25 and 35 have had it recently.

That number is expected to rise.

“Although the practice of circumcising young girls is slowly declining, the trend has now changed to circumcising married women,” said Beatrice Chelangat, executive director of REACH, at an event announcing the survey in September.

Related: 23 women have been murdered in these Ugandan towns since May. Police blame witchcraft.

A law passed in 2010 prohibits the practice for girls and women, describing it as "crude, outdated and an infringement on the rights of the girl child." Locals say the law had a real impact.

“We are not cutting young girls anymore because they are at risk of experiencing heavy bleeding that may result to death,” said Jane Cherotich, a traditional healer based in the village of Kapchorwa in eastern Uganda, who has been performing FGM for 15 years. “When a girl gets injured or dies during the procedure, then the authorities arrest everyone, including their parents. We are now focusing on married women because whatever happens to them, they take responsibility. Besides, no one knows about it.”

Even so, an estimated 100,000 girls in Kapchorwa, Kween and Bukwo districts of eastern Uganda are at risk of undergoing FGM, the United Nations Population Fund (UNFPA) country warned in September.

Globally, the World Health Organization estimates that more than 200 million girls and women have been circumcised in 30 countries in Africa, the Middle East and Asia, where FGM is most prevalent.

In eastern Uganda, where the Sabiny tribe dominates, girls used to be circumcised between the ages of 9 and 14, after which, they were married off. But after the 2010 ban and ensuing crackdown by authorities, many were left uncircumcised.

Now, these women are under pressure from their husbands, mothers-in-law — and society — to undergo the procedure as the tribal culture dictates: Members of the community say an uncircumcised woman is unfit to be married, is undeserving of respect and should be shunned.

Related: In northern Uganda, these women move past insurgency by baking cakes

“We have to undergo the cut to become full women," Chemtai said. "You can’t serve food [to elders] or talk to elders in a meeting when you are not circumcised. They will abuse you and curse you.”

As a result, the tribe found a solution, she added.

“The elders are now allowing young girls to first get married before they can undergo the procedure because of the government strict rules," she said. "It’s mandatory to be circumcised after marriage to be accepted by the community.”

Members of the tribe say that laws against the practice won't stop it. It's necessary, they add, not just because it's part of their culture that sets their tribe apart but also because it initiates girls into womanhood and shapes the morality of women during marriage.

“The practice cannot end soon because it’s our culture, and we love it,” Cherotich said. “We are going only to circumcise those who are willing to take part in the procedure. We are targeting mature, married women who understand the culture of our community and the importance of circumcision.”

John Kibet, 30, said he wanted his wife, Chemtai, to undergo the procedure because he wanted her to fit into their society. As a result, he reluctantly waited until they were married.

“I wanted to get a girl who was already cut as our culture dictates but it was impossible — most young girls here are not circumcised because their parents fear that they will be arrested if they force them to undergo the procedure," he said. "So, I allowed my wife to be circumcised so that she can be accepted by the community.”

Meanwhile, local government officials have vowed to crack down on women and their husbands who are carrying out the practice in secret.

But Chemtai laughed it off.

“It’s impossible, they know,” she said. “FGM is mandatory ... How will they know that a married woman is cut?”