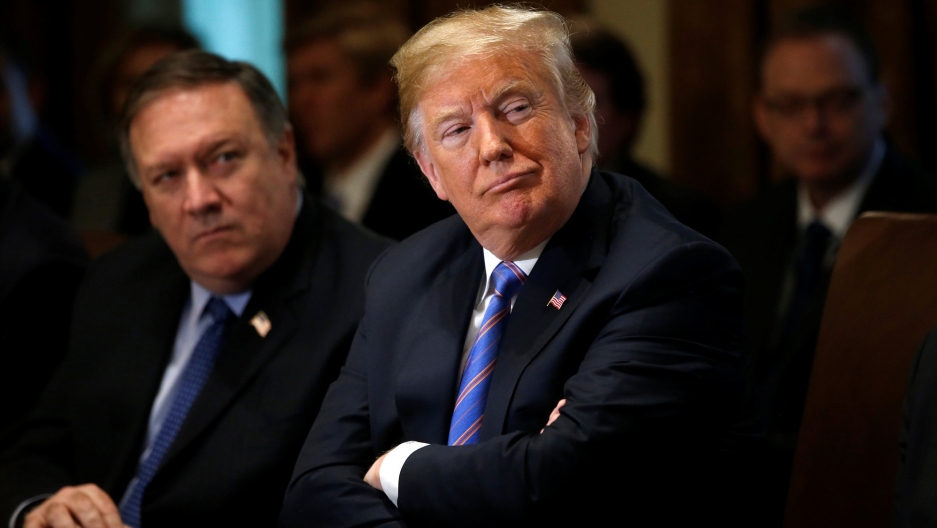 US Secretary of State Mike Pompeo and President Donald Trump listen during a cabinet meeting at the White House, July 18, 2018.

US President Donald Trump continues to face an uproar over his failure to confront Russian President Vladimir Putin over Russia's 2016 US election meddling.

The White House is struggling to contain the political outcry and confusion over the summit and Trump denying he ever meant to say that Moscow was no longer targeting the United States.

The latest news came after a journalist before a morning cabinet meeting on whether Russia was still targeting the United States, Trump looked at the reporter, shook his head and said, "No."

At a later briefing, White House spokeswoman Sarah Sanders said the president was saying "no" to answering questions, not to the question itself.

US intelligence officials have said Russia's efforts to undermine elections are continuing and now target the Nov. 6 congressional races. Sanders said Trump believes the threat from Russia to undermine those elections still exists.

Asked later in an interview with CBS News whether he held Putin personally responsible for meddling in the 2016 election, Trump said he did.

"Well, I would, because he's in charge of the country. Just like I consider myself to be responsible for things that happen in this country," he said.

The US president said that in his talks with Putin, he was "very strong on the fact that we can't have meddling, we can't have any of that." But Trump also appeared to question whether such statements would have an impact on Russia. "We're also living in a grown-up world," he said.

Sanders explanation of Trump's "No" was the second time since Monday's summit that Trump and the White House have blamed a misstatement or misunderstanding for the furor over Russia.

On Tuesday, Trump said he misspoke at a Helsinki news conference with Putin and that he accepted intelligence agency conclusions about Russian election meddling, although he hedged by deviating from his prepared notes to say "it could be other people also. There's a lot of people out there."

Trump stunned the world on Monday by shying away from criticizing the Russian leader for Moscow's actions to undermine the election, sparking bipartisan fury at home and prompting calls by some US lawmakers for tougher sanctions and other actions to punish Russia.

Critics have accused Trump of siding with Russia over his own country by failing to criticize Moscow for what US intelligence agencies last year described as Russia's election interference in an attempt to sow discord, aid Trump's candidacy and disparage Trump's Democratic opponent Hillary Clinton.

Putin has denied the allegations.

"We're doing very well, probably as well as anybody has ever done with Russia. And there's been no president ever as tough as I have been on Russia," Trump said before the Cabinet meeting, adding that Putin "understands it and he's not happy about it."

In a series of early morning Twitter posts, the Republican president said the summit would eventually produce "big results" and accused his critics of "Trump Derangement Syndrome."

"Some people HATE the fact that I got along well with President Putin of Russia. They would rather go to war than see this. It's called Trump Derangement Syndrome!" the president wrote.

US Director of National Intelligence Dan Coats told a congressional committee in February he already had seen evidence Russia was targeting November's elections when Republican control of the House of Representatives and Senate is at stake.

In rebutting Trump's dismissive comments about US intelligence on Monday, Coats said, "We have been clear in our assessments of Russian meddling in the 2016 election and their ongoing, pervasive efforts to undermine our democracy."

"We won't be able, as a nation, to fight back against foreign interference in our elections if the Commander in Chief doesn't even acknowledge that it's a real problem," Schumer said in a statement.

Republican Senator John McCain accused Trump of "playing right into Putin's hands" with the president's comments in a Fox News interview on Tuesday that appeared to question the American commitment to defend all NATO allies.

Asked why Americans should defend NATO member Montenegro from attack, Trump said, "I've asked the same question. Montenegro is a tiny country with very strong people. ... They are very aggressive people, they may get aggressive, and congratulations, you are in World War Three."

Montenegro joined NATO last year in defiance of Moscow after accusing Russian spies of orchestrating an attempted coup to derail the accession.

In his morning tweets, Trump said he elicited a promise from Putin during their meeting to help negotiations with North Korea, but did not say how. Trump met North Korea's Kim Jong-un in June and has since received a letter from Kim expressing hope for "practical actions" in the future as the United States seeking Pyongyang's denuclearization.

Russia's RIA news agency, citing Moscow's envoy to Pyongyang, reported that a summit between the leaders of Russia and North Korea is "on the agenda" and that it would be "logical" to raise the idea of lifting sanctions.