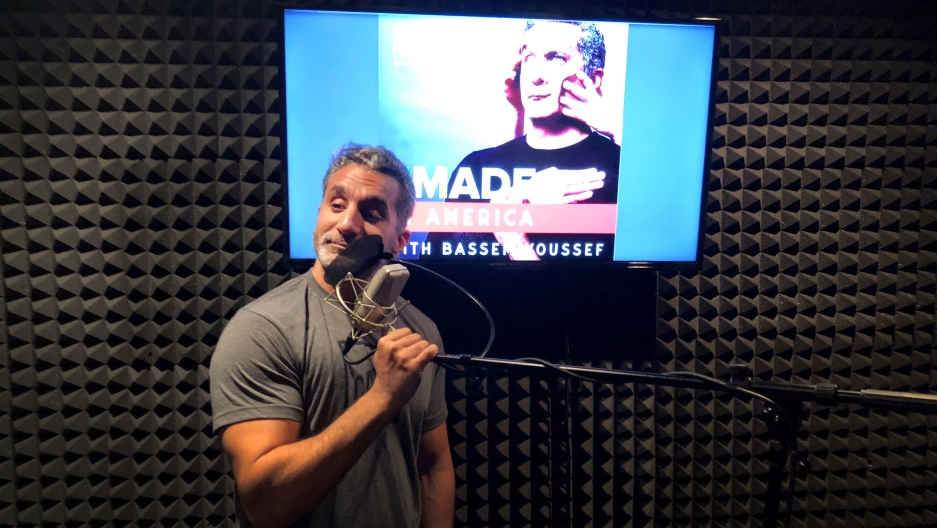 Bassem Youssef stands in front of a microphone in a recording studio in Los Angeles in 2018. His new podcast, "Remade in America with Bassem Youssef," explores his life as an outsider in America.

Not so long ago, the life of Egyptian political satirist Bassem Youssef was like a fairy tale.

He appeared on the “Daily Show” with Jon Stewart, his comedic idol. Time magazine in 2013 named Youssef one of the 100 Most Influential People in the World. And in his home country of Egypt, Youssef was adored by millions for speaking truth to power on Al Bernameg, his political satire television show.

Fast-forward to 2018. Youssef is in a no-frills recording studio on LA’s Melrose Avenue plugging a food delivery service that is a sponsor of a new podcast series Youssef is launching.

The podcast is one of many things he’s doing to restart his life and career in the United States.

“I was never into podcasts,” Youssef said. “But I like talking to people, so why not? And if you are going to give me money to talk to people, why not?”

Youssef became famous in 2011. That’s when during the Arab Spring, this heart-surgeon-turned-comedian parlayed funny YouTube videos shot in the laundry room of his Cairo apartment into his popular television show that was watched by 30 million Egyptians nightly.

In the broadcasts, Youssef poked fun at everyone from Egypt’s military to the Muslim Brotherhood, skewering institutions and people who a few years earlier would have been above criticism.

But as Youssef’s fame grew, his life in Egypt got harder, especially as the initial optimism and new freedoms of the Arab Spring faded.

He received death threats. A warrant was issued for his arrest. And after the military seized power in 2013, his show was taken off the air.

Youssef fled the country the next year.

Related: Bassem Youssef set his satiric sights on Egypt's military, and got yanked off the air

“It’s not like my career has ended because of bad ratings or anything,” said Youssef. “It was taken away from me because of political causes.”

Now Youssef is living in Los Angeles and, like countless others in LA, he’s just one more person hustling to make it in show business.

“I'm trying to find my own niche, my own thing. And I also made peace with myself that I will never be as big as I was in Egypt,” he said.

But Youssef is trying very hard to find new fans in the US. That effort includes his podcast series, called “Remade in America with Bassem Youssef.”  In each episode, he explores his adjustment to life in America.

When not behind the podcast microphone, Youssef does speaking engagements and stand-up comedy at clubs. He also takes meetings with Hollywood executives, hoping to get the green light for a comedy special or non-scripted reality show about his life in America.

Related: 'Egypt's Jon Stewart' is trying to rebuild his comedy career in the US. It’s hard.

“In LA, everybody is pitching something,” Youssef said during a break in his podcast recording. “I can't remember how many times I went to Netflix pitching stuff.”

But unlike much of his Hollywood competition, Youssef is in his 40s with a wife and two kids to support.

He also worries that his accent might limit the kinds of roles he gets. He regularly works with a dialect coach and hones his pronunciation skills while in-studio recording his podcast.

Youssef says he does have one advantage as he looks for gigs. It’s a distinct life experience compared with other comedians in the US, including those who weave the Muslim American experience into their acts, like Aziz Ansari and Hasan Minhaj.

“They are Muslims, yes, but they are not us,” Youssef said. “I'm an Arab who is an immigrant. I just came from the Middle East that all of you guys are afraid of. And I think there's a lot to be said from that part of the world, not people who are already Americanized and Westernized.”

While he searches for his big break here in his adopted country, Youssef thinks often about Egypt. His family regularly goes back.

But he says the best way to serve the people of Egypt and explore the issues that are important to him is to focus on building his career in this country.

“To do that I need to be successful here,” Youssef said.  “And if I’m more successful here, I'll have more exposure and more reach. And more people will hear and see what's happening in the Middle East.”

And Bassem Youssef wants Netflix to know that he’s ready to take another meeting anytime.