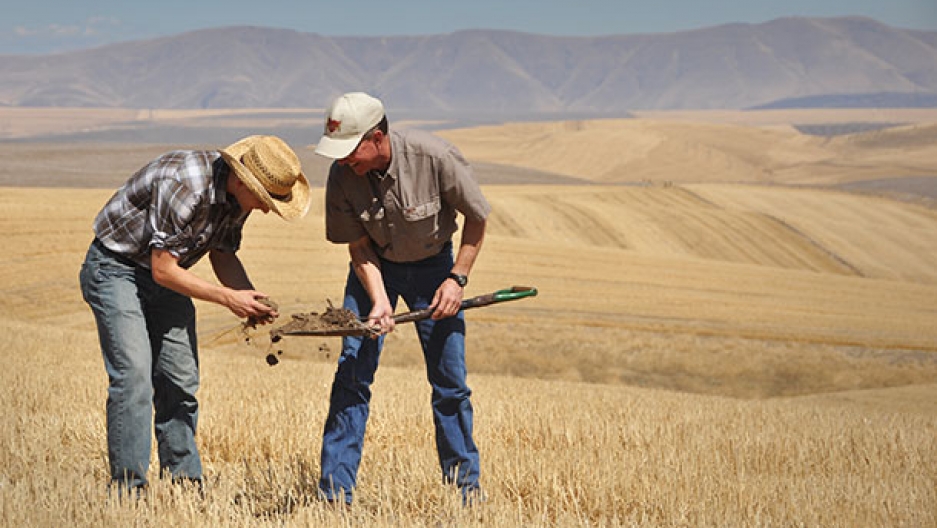 Conservation programs under the farm bill provide funding for farmers to plant cover crops and maintain soil health. Above, two soil conservationists examine a soil sample on a farm in Oregon.
Credit:

US Department of Agriculture

The US Congress took almost two years to negotiate the 2014 Farm Bill. The 2018 Farm Bill is shaping up to be possibly even more divisive.

For the first time, the House version of the farm bill passed along entirely partisan lines. Every House Democrat opposed it. The Republican-only measure contains cuts and changes to conservation programs and would tighten eligibility for SNAP recipients. The Senate passed its version on a far more bipartisan vote of 86-11. Its version contains fewer cuts to conservation programs and rejects the cuts to SNAP.

Fiscal conservatives have pushed hard to eliminate many farm bill programs, both for farmers and in the SNAP program, while farm representatives and some farm senators have lobbied to keep these programs, says Ben Lilliston of the Institute for Agriculture and Trade Policy in Minnesota. The environmental community wants the bill to step up its conservation programs, the health community has weighed in over nutrition programs, and rural development advocates are fighting to maintain funding for rural infrastructure.

“It’s a complicated mix of constituencies and it’s creating a bit of a political fight in this particular farm bill, and I think we’ll see this going forward in future farm bills,” Lilliston says.

The farm bill focuses on producing “way more than the US can use and then exporting it around the world,” Lilliston says. “It also focuses on producing a lot of animal feed in order to produce massive amounts of pork, poultry and beef, and then export that. At the same time, farmers who are interested in producing locally and accessing local markets often have trouble getting access to farmland. The infrastructure is not there. The farm bill really kind of works against that.”

The push for cuts to conservation also concerns Lilliston. The farm bill supports a variety of such programs, including the Conservation Reserve Program (which takes marginal farmland out of production and protects it for wildlife and natural habitat), the Conservation Stewardship Program, and EQIP, the Environmental Quality Incentives Program.

“These programs help support farmers who want to farm using practices that protect soil health or enhance soil health, protect water quality, reduce emissions and are able to withstand the more extreme weather that we're seeing with climate change,” Lilliston explains. “They're really popular programs. They can only fund around half of the participants that try to get access to them."

The House bill eliminates the Conservation Stewardship Program and makes overall cuts to the other conservation programs, as well. The Senate farm bill, while less severe, also contains cuts to conservation programs. “We’re kind of going in the opposite direction that we really need to go, in terms of helping farmers respond to climate change,” Lilliston says.

The fundamental problem, Lilliston says, is that the agriculture committee chairs in both the Senate and House are climate change deniers.

He says, “When you don't acknowledge that climate change is happening and that you need to respond to it and that [your response] needs to be part of your service to farmers, then you write a farm bill as if climate change is not happening, as if we don't need to make these kinds of changes, as if things are going on in the same way that they always have. That's a real problem. It's a real blind spot for Congress and a real blind spot in this farm bill.”

Agriculture occupies a unique place in regards to climate change, Lilliston notes. On the one hand, farmers are already experiencing its symptoms: excessive heat and drought, extreme weather events that can quickly wipe out crops and pests, and weeds moving into crop systems where they have never before been seen. “There's a lot of change happening directly to farmers right now, and they're trying to deal with that,” Lilliston says.

At the same time, agriculture contributes to climate change. Heavy synthetic fertilizer use, which emits nitrous oxide, and methane emissions from livestock production are huge drivers of greenhouse gas emissions.

And there’s a third way that agriculture intersects with climate change: It could potentially help mitigate its effects by sequestering carbon.

“Perennial crops, cover crops and sustainable grazing can all help sequester carbon from the atmosphere,” Lilliston points out. “It's a really unique intersection when compared to other sectors and climate change.”