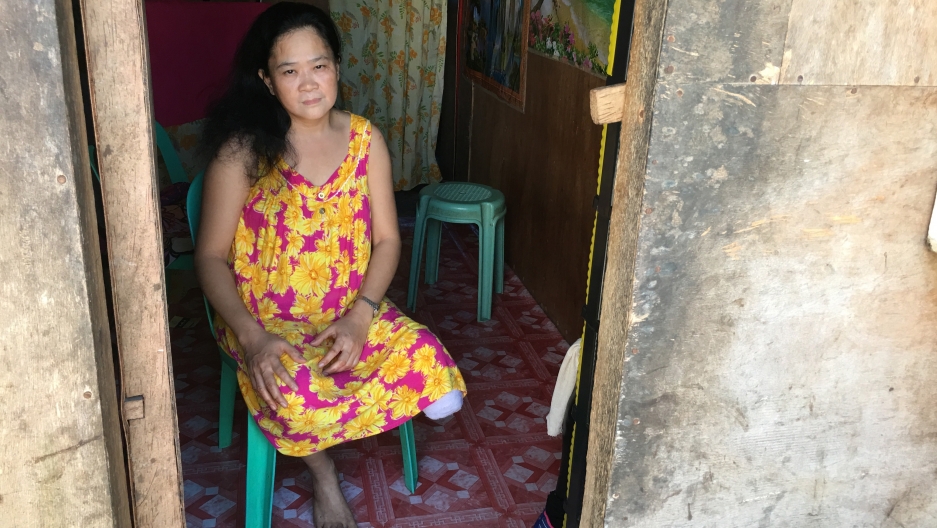 Bacita De La Rosa says no one in Tacloban was prepared for Typhoon Haiyan’s intensity as it bore down on this coastal Philippine city in November 2013.

She recalls how her family thought they’d be safe inside their two-story home of concrete and corrugated steel that overlooks Anibong Bay. But the Category 5 storm, known locally as Yolanda, produced sustained wind speeds up to 195 mph that tore the roof off their hillside home.

“Rain was pouring inside, and my husband went upstairs to protect our grandchildren,” the 71-year-old says. “I could only stay on the ground floor in my wheelchair.”

For almost three decades, De La Rosa has been unable to walk due to a spinal cord injury she suffered after she was struck by a vehicle. She has since been dependent upon her family for help with many basic needs and cannot leave her home without assistance. 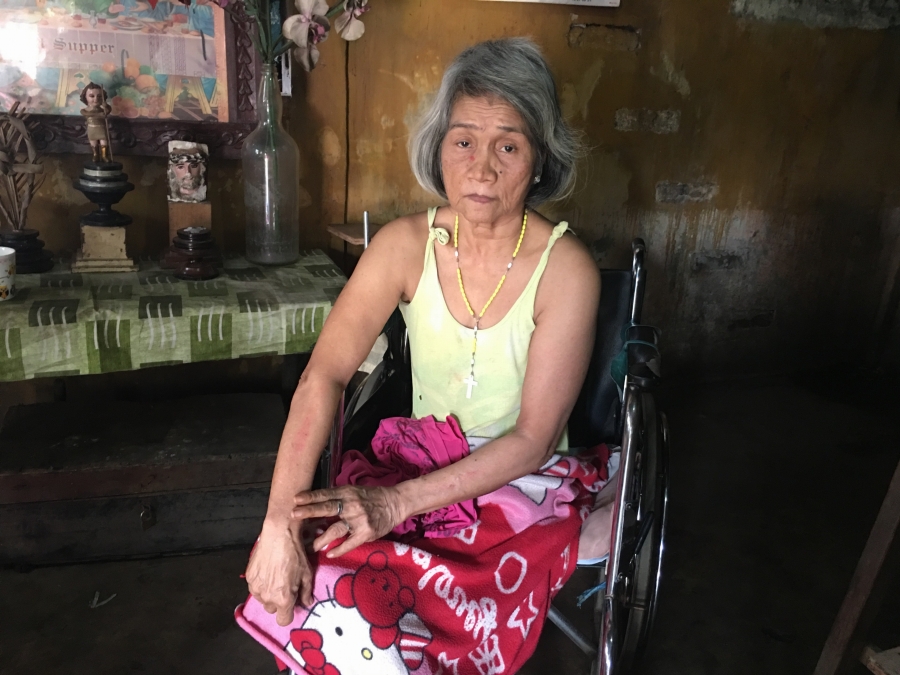 For almost three decades, Bacita De La Rosa has been unable to walk due to a spinal cord injury she suffered after she was struck by a vehicle. She has since been dependent upon her family for help with many basic needs and cannot leave her home without assistance — all of which has proven to be very difficult when the inevitable tropical storm comes.

The typhoon exacerbated her vulnerability when it caused an 18.5-foot high surge in the bay that sent water rushing into De La Rosa’s house.

When asked how high the flood waters reached, she places her hands at her waist.

“All I could do was pray” until the water receded, says De La Rosa, who feared that she’d drown inside her own home while sitting on her wheelchair.

De La Rosa says her family doesn’t want to move away from the waterfront, so she continues to pray that another storm like Yolanda, which killed over 6,000 Filipinos, won’t hit Tacloban again.

But environmental watchdog organizations warn that climate change will cause more powerful superstorms like it.

And advocates say that puts the lives of people like Bacita De La Rosa at greater risk. People with a physical disability could be most affected by the immediate devastation of increasingly severe weather as well as from the aftermath of such phenomena.

Climate change-related disasters have the potential to disrupt access to caregivers, assistive devices and medical supplies, which many people with a physical disability depend on, says Alex Ghenis of the Berkeley, California-based World Institute on Disability.

“People with disabilities are disproportionately affected by pretty much every aspect of climate change,” he says, adding that up until now, the impact on this population has mostly been ignored in scientific literature and policy.

Ghenis explains there is a wide range of concerns that are often unique to the particular kind of disability. For example, a person with a mobility impairment might be less able to escape a storm on their own, while someone who has a visual or hearing impairment might not receive appropriate evacuation notices. Accessible shelters could be difficult to locate.

The lingering ramifications of a typhoon, flood or fire is another concern.

Climate change-spurred disasters may also leave in their wake greater numbers of people with physical disabilities, he adds, because they may sustain permanent injuries or illnesses from things like falling buildings or environmental pollution.

That was what happened to Lita Estur. She lost her father, home and left leg during Typhoon Yolanda.

“I regret not evacuating sooner,” says the 50-year-old, whose house in a bayside squatter village was washed away during the storm surge.

As Estur tried escaping the rising water, her foot was deeply cut and the wound became infected. She later underwent an amputation below her knee.

Estur’s home has since been rebuilt in its original location and she now wears a prosthetic leg. But she says it’s too difficult to walk and mostly stays indoors.

According to Perpi Tiongson, a research director at the Oscar M. Lopez Center in Manila, which studies climate change, for a person with a disability in the Philippines, life is precarious enough as it is. Many already live in poverty and their impairment can further limit their access to education or employment.

She says their challenges are “magnified almost a million times over” by the effects of severe weather. 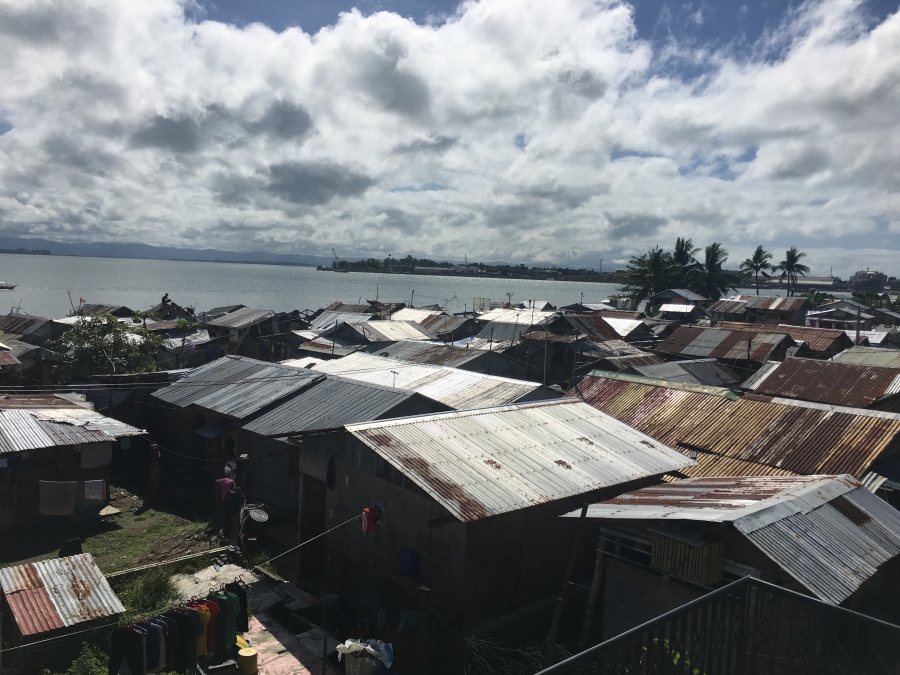 In November 2013, Anibong Bay in the Philippines was hit by a Category 5 storm known locally as Yolanda, which produced sustained wind speeds up to 195 mph that tore through homes.

Tiongson explains that Typhoon Yolanda exposed a particular deficit in education in some deaf communities.

She says there may be dozens of different signed languages throughout the country, and the standard version of Philippine signing isn’t required to be taught at schools for the deaf. This compounded the challenges in assisting people with hearing impairments during the storm.

“Humanitarian workers had difficulty communicating with them, to inform them where were the safe places to go, where were the evacuation centers, when would food come, where was food available,” Tiongson says.

She says since 2013, efforts have been made to incorporate new sign-language gestures for words like typhoon, storm surge and signal numbers in communities where these terms do not already exist. Tiongson also says adding closed captioning to television broadcasts — which only recently began in the Philippines — is another way to minimize the potential harm of a weather-related disaster for the deaf.

The city of Tacloban has made improvements to its own early warning system for when the next big storm hits — some waterside villages will raise flags to warn the deaf and announcements over megaphones will be made to alert the visually impaired.

But Clara Francisco, who heads the Tacloban Persons With Disabilities Federation, still doesn’t think that the needs of people like her are fully understood.

She contends it was only because of Typhoon Yolanda that local authorities realized her community exists at all.

“We are less important to them. It’s as simple as that,” she says.

Francisco adds that she hopes it doesn’t take another super storm to remind authorities that they’re still here.