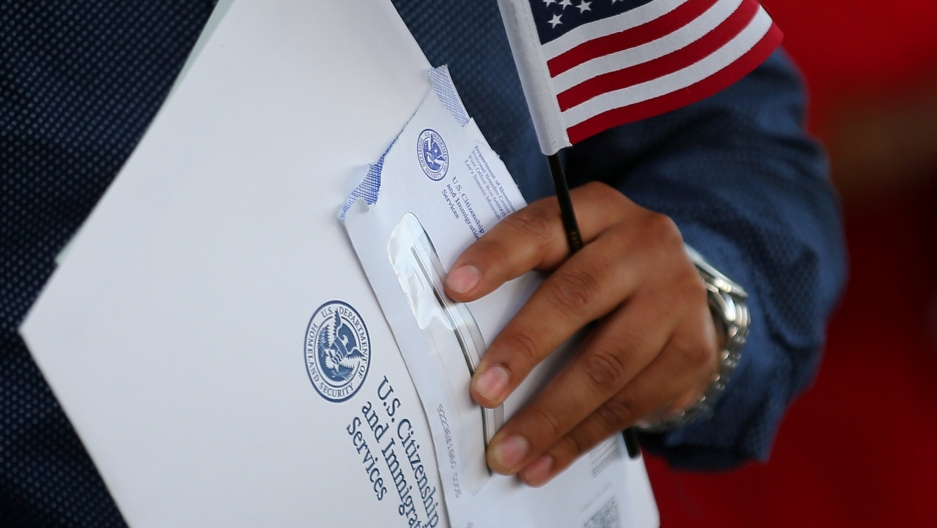 A newly naturalized US citizen leaves a swearing in ceremony in Los Angeles on July 18, 2017, holding paperwork from US Citizenship and Immigration Services. The agency says it is adding resources to review thousands of accepted citizenship applications for fraud.

The government agency that handles US citizenship applications has been using newly digitized fingerprints to investigate cases of fraud since the beginning of 2017. So far, one person’s citizenship has been revoked.

He left India, his home country, and arrived at San Francisco International Airport without any travel documents or proof of identity. Singh later used a different name, Baljinder Singh, to apply for asylum — an application he abandoned — and eventually married a US citizen and got a visa. Years later, he became a US citizen as Baljinder Singh.

This is how it happened according to the Justice Department, which filed a case against Singh seeking to strip him of his citizenship. It won that case in January 2018, after Singh failed to appear in court to defend himself. He reverted to his status as a permanent resident, which makes him deportable.

Now, the government is increasing its efforts to find more cases like Singh’s.

US Citizenship and Immigration Services (USCIS) began reviewing cases that were affected by an incomplete digital fingerprint repository after a 2016 internal investigation found that hundreds of people with deportation orders might have been granted citizenship. It assigned officers to the Operation Janus joint task-force in January 2017. Singh’s case was the first to result in denaturalization, and the agency said it intended to refer 1,600 more cases for prosecution. USCIS announced in June that Operation Janus would have a new office in Los Angeles. USCIS director Francis Cissna told the Associated Press that his agency is hiring “several dozen lawyers and immigration officers to review cases of immigrants who were ordered deported and are suspected of using fake identities to later get green cards and citizenship through naturalization.”

To date, USCIS told PRI, it has identified 2,500 cases that need review and has referred 100 of them to the Department of Justice (DOJ) for prosecution.

As of January, the DOJ has brought cases against three men: Davinder Singh, Parvez Manzoor Khan and Rashid Mahmood. Manzoor Khan and Mahmood are both originally from Pakistan and also married to US citizens. While Singh's citizenship has been revoked, the other two cases are still pending. The government has accused them of fraud and willful misrepresentation or false testimony in acquiring their citizenship.

How common is revoking US citizenship?

"Back in the 1940s and 50s, the government was very actively seeking to remove people's citizenship through denaturalization campaigns," says Amanda Frost, professor of law at American University's Washington College of Law. Frost studies immigration and constitutional law, and has studied how the government collects information from immigrants. She says the last big denaturalization campaign was part of the “Red Scare,” a time during the Cold War when fear of communism enabled political repression. "It was a way to chill people's speech and to frighten people who were naturalized citizens. Finally the Supreme Court in 1967 said, 'No, you can't take away anyone's citizenship unless they willingly renounce it or there's some sort of fraud in the application.'"

Frost says after this ruling, the government slowed its denaturalization campaigns almost to a stop. "A few dozen cases a year at most,” she says. “And those cases involved war criminals, people with strong Nazi affiliations, those who posed serious security threats or had acquired their citizenship fraudulently.”

"The Trump administration saying that they might denaturalize thousands of people is very different from recent past practice," says Frost.

But revoking citizenship isn't an easy task, according to James LaVigne, a lawyer in Florida who is representing one of the three men whose citizenship have come under question. He asked that PRI not use identify his client because the case is ongoing.

He says denaturalization has to be done through federal district courts. Only a judge can order citizenship revoked and defendants can take their case all the way to the Supreme Court.

"The courts are very good at protecting people's rights," LaVigne says. "The Supreme Court decided in a different type of case, but similar scenario, said it's not so easy for the government to take away someone's citizenship."

Last year, the Supreme Court ruled in Maslenjak v. United States that even if someone lies to a government official, their citizenship can only be revoked if they are not actually eligible for citizenship.

LaVigne says it's important for citizens to know their rights and understand that they can defend themselves in court.

"You must present your own case in support of your own defenses,” he says. “If you can't afford the legal costs, there are organizations that can help with that."

LaVigne says his client works as a truck driver today and has two children who were born in the US.

"He's been in this country for years, pays his taxes just like everyone else, has always worked, is not on welfare," he says. A couple of months ago, his client suffered a heart attack.

How did the US government miss the fraudulent claims in the first place?

Every time an immigrant applies for citizenship, USCIS checks their fingerprints against two repositories from the Department of Homeland Security and the Federal Bureau of Investigation. Until recently, those fingerprints were not digitized, so sometimes cases fell through the cracks.

USCIS declined an interview request, but Michael Bars, a spokesperson for the department, said in an email that "nobody who obtained US citizenship by deliberately assuming a false identity will be surprised to learn they are being referred to the Justice Department for denaturalization proceedings. USCIS screens for deliberate acts of fraud relating to forgery or the use of false identities, and we go to great lengths to ensure individuals aren’t susceptible to instances of error, misunderstanding or special circumstances."

Frost wonders if the number of possible fraudulent citizenship cases justifies the time and resources the US government is putting into Operation Janus.

"This seems to me an over-enforcement of the law," she says. "We have speed limits, we have laws against jaywalking, but we don't expect out government to put lots of money and resources, hire many attorneys and police officers to pursue each and every one of us if we go one mile over the speed limit. That's just a waste of our government resources and not a good use of prosecutorial discretion."

USCIS told PRI that "funding for the program will come from within the existing USCIS budget and will not adversely impact processing times in other workloads." The agency is "actively working to hire new immigration officers and lawyers to staff the unit."

USCIS would not specify what their exact budget is for their work on Operation Janus and if that budget has increased.

What happens to those whose citizenship is revoked?

Frost says the answer to this question depends on individual cases. Some people might lose their citizenship but get to stay in the country because, for example, their home countries are too dangerous for them to return — which she says raises questions about why the government would spend resources to revoke their citizenship in the first place.

Frost also wonders if some people might end up stateless as a result of denaturalization.

"If the country they come from either refuses to take them back or doesn't give them citizenship or perhaps doesn't exist anymore, then those people are without citizenship," she says.

Frost worries about the climate in which the Trump administration is expanding Operation Janus. On the campaign trail, then-candidate Donald Trump vowed to end birthright citizenship, which guarantees that anyone born in the US is automatically a citizen.

"The message that's being sent, whether they intend it or not, is to chill and frighten naturalized citizens." says Frost. "The broader the government's power and ability to denaturalize, the more at risk it puts the 20 million people in this country who are naturalized citizens and the more it renders them second-class citizens. Unlike a native-born American they have to fear that they might become the target of the government's denaturalization campaign."