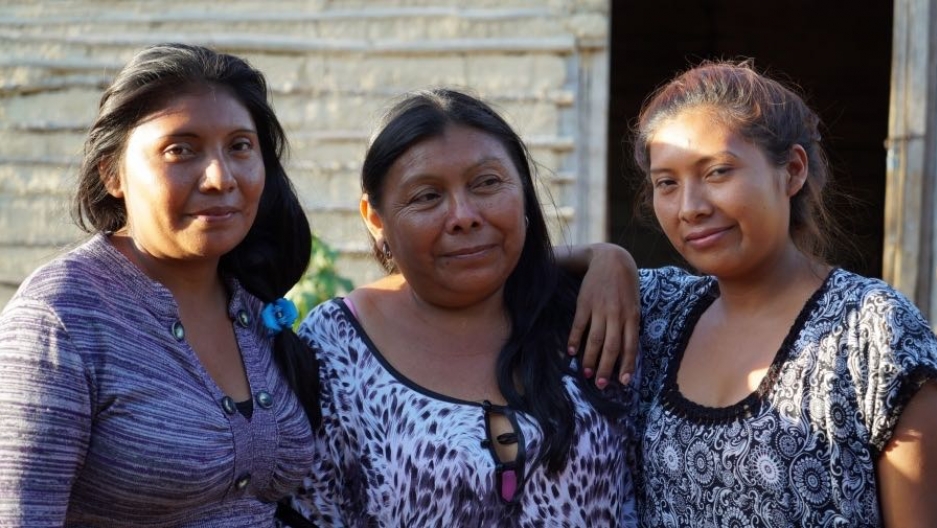 For years, the Wayuu tribe in La Guajira, a remote area in northernmost Colombia, was run by a male chieftain. But 13 years ago, male elders decided to appoint a woman as its leader. After the success of being led by a female head, the community changed its governance traditions and now exclusively appoints women to lead.

“When I first started, I didn’t know anything,” Neris Uriana, the tribe’s first-ever female chieftain, told PRI. “But over time, one learns how to lead, the required skills you need to be head of a community.” 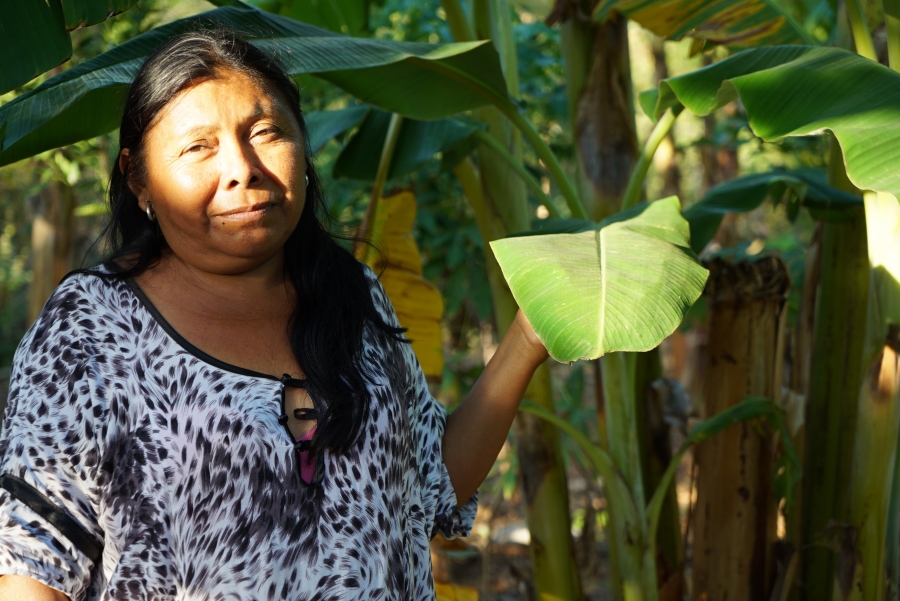 Neris Uriana was elected in 2005. She was already involved in providing support to the community’s mothers, and Jorge Uriana, along with other elders, believed she had the qualities needed to lead the tribe. It was a first for Wayuu communities in Albania, in La Guajira.

“We had had some problems with communicating with leaders of other tribes and in our own village,” explained Jorge Uriana, who was the community leader until 2005 and is Neris Uriana's husband.

Jorge Uriana explained that traditionally, Wayuu men negotiate and resolve disputes but that some male leaders can come off as confrontational and even aggressive at times.

“Whereas women, when they speak, they address the human side. They tend to be more peace-loving and more humanitarian in their outlook. We wanted to turn the way things were on its head. We wanted women to use their way of dialogue to resolve our conflicts, and we wanted to transform our culture.”

“I realized I had a commitment and an obligation to my people,” said Neris Uriana, who will lead for as long as she likes (or until someone else steps up). "I really trained myself in leadership, and now, I feel like I am able to really achieve great things.” 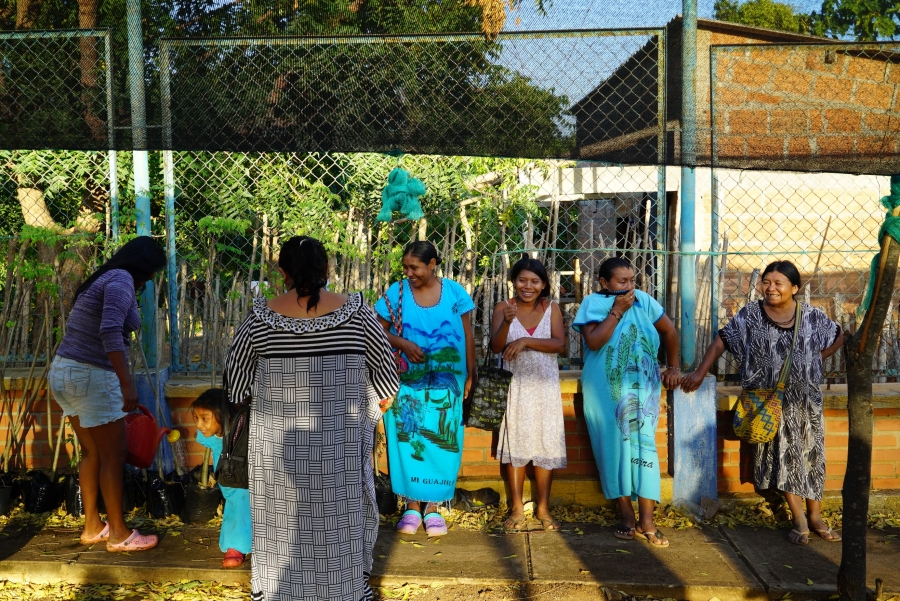 Women in the Wayuu tribe share a laugh in their garden while taking a break from their daily work.

Marta Pushiana is one of the many women who have become more involved in the tribe’s community since Neris Uriana's appointment.

“Now, we have a female leader; more women are taking more responsibility in the tribe. Before, we always had to stay at home and look after the children and cook and clean,” said Pushiana. “Now, the men share those responsibilities with us, so that women have the opportunity to work, to help build, to be involved in leadership. The whole dynamic in the tribe has changed for the better.”

Jorge Uriana said the community also wanted to drive participation from its women and invert the “machismo culture” that is common in Colombia.

Although Wayuu tribes have traditionally treated women as equals to men and have a more matriarchal culture than other nonindigenous Colombians, few tribes are led by women, and even less — if any — have permanently pledged to only appoint women.

Neris Uriana and Jorge Uriana insist they are Colombia's only tribe to have this model. 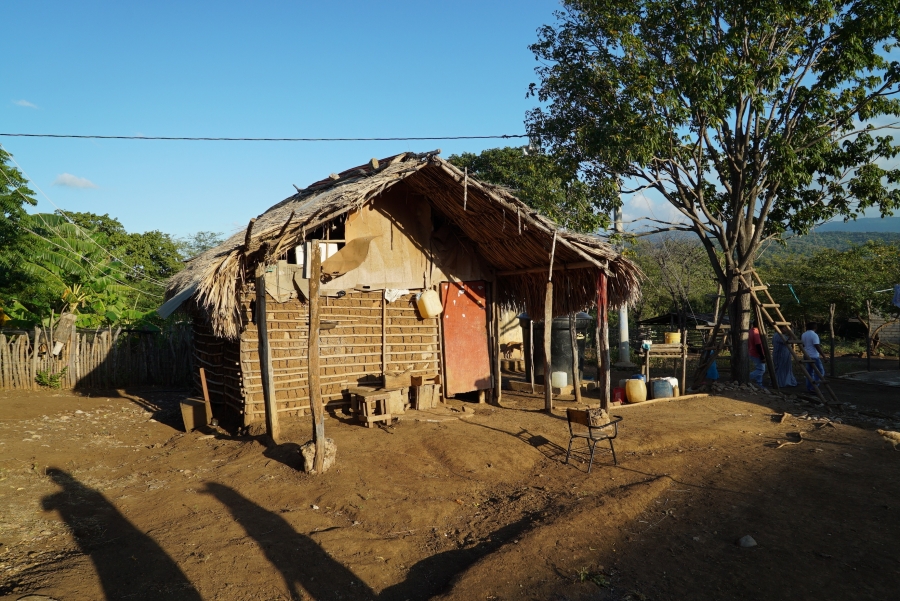 This is a typical Wayuu house in Neris Uriana's tribe, made from yotojoro — a mix of mud, hay and dried canes, topped with cactus roofing.

“Women have the most important role as life givers, and so they should also have the right to make decisions,” said Jorge Uriana. “There are communities who have invited our women to participate in their debates, but they are contradictory.”

On the one hand, Neris Uriana said, Wayuu men worship and revere women as life givers, yet they “don’t necessarily respect us as decision-makers.”

Since Neris Uriana took up her position, she has introduced a long-term agricultural initiative to help sustain her community, rather than continually living hand to mouth. Neris Uriana sought the help of outsiders to teach her and other women in the tribe about irrigation, crop cycles and land use, so they could have ample produce throughout the year. The women also use their ancestral knowledge of lunar cycles to plant food and strongly believe the can use their connection with the Earth to sustain themselves.

“Wayuu women, in particular, are very close to nature,” Neris Uriana said. “So, we have started using this spiritual bond to enable to Earth to feed us.” 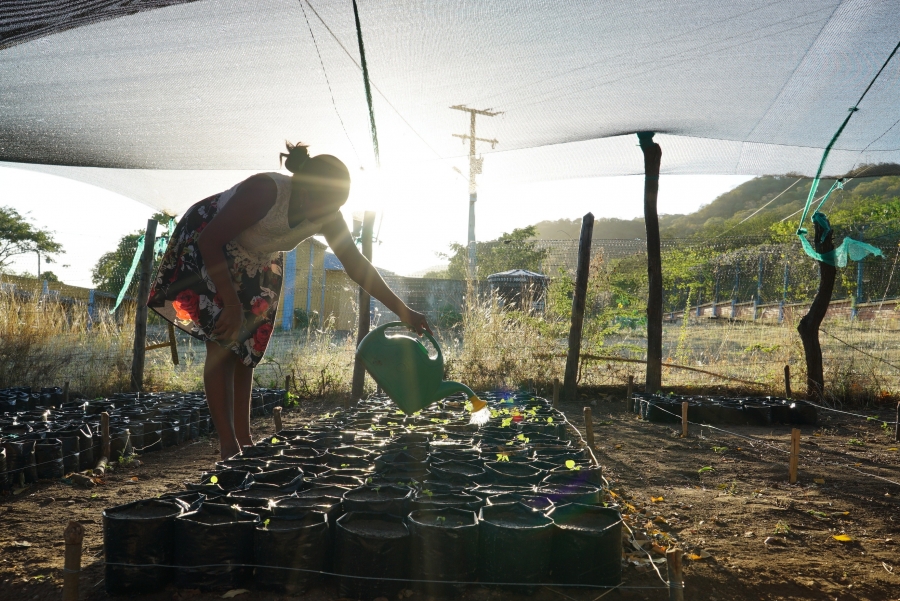 A woman from the Wayuu tribe who is part of the growing initiative waters the saplings.

La Guajira is an area that receives very little rainfall — only intensified by repeated El Niño weather patterns. In 2015, the region saw rain for the first time in three years. The drought severely impacted the Wayuu communities, causing extreme malnutrition among Indigenous children. But thanks to Neris Uriana's project, the community was well-versed in growing crops with minimal water supply.

“We used to only be able to grow crops during the rainy season but now, we can grow them all year round,” Neris Uriana explained. “There is food in summer, which is rare and had never happened before.

“I made sure all the women in the community got involved in growing our food, so we could be self-sufficient and look after ourselves.”

Pushaina is one of the women who helps lead the food program and said she loves being able to help provide for her village.

“We have our own resources, and we know exactly how to sustain ourselves. And we can grow crops using as little water as possible, so we can conserve our resources when it doesn’t rain.”

“I am proud of myself because I am an entrepreneur,” Pushiana said. “I am a hard worker, and I am driving myself forward. I am no longer dependent on a man for anything to survive.”

The initiative has been such a success that the tribe now produces surplus food and sells it to other nearby communities.

“Last year, we even made $9 million Columbian pesos [$3,000] from selling young tree plants to a nearby coal mine who needed them for reforestation projects.” 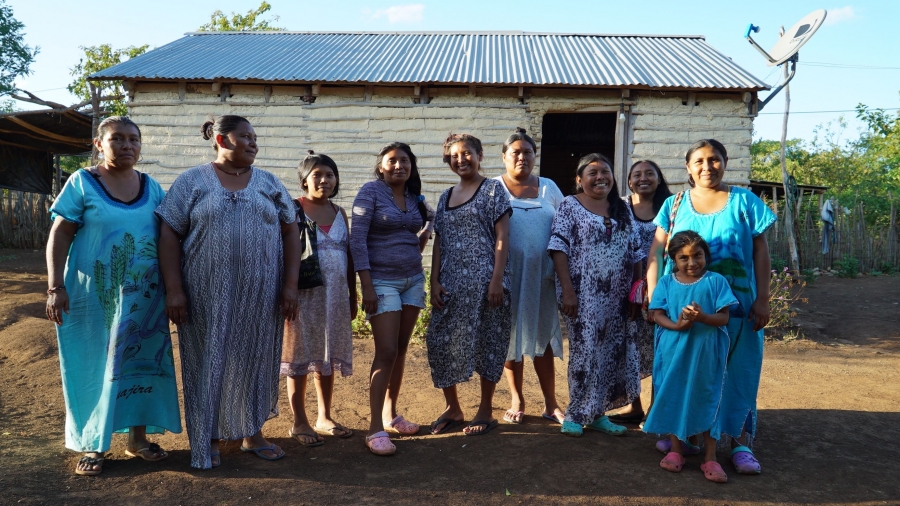 Women from the tribe stand in front of a house.

Neris Uriana has experienced problems from males in her community, such as aggressive confrontation, disrespecting her decisions and disobeying tribal rules. However, she insists they are the kind of problems every leader faces and not in response to her gender.

The tribe's women hope the leadership change will inspire the younger girls to aim high.

“It’s wonderful to be able to be an example to my daughters, that they can achieve anything they want,” Neris Uriana said. “They, and other young women in the community, are learning from me how to take charge as a woman.”

Neris Uriana hopes by teaching her daughters the skills they need, one day they will be able to lead, too.

“I hope this will inspire generations to come.”