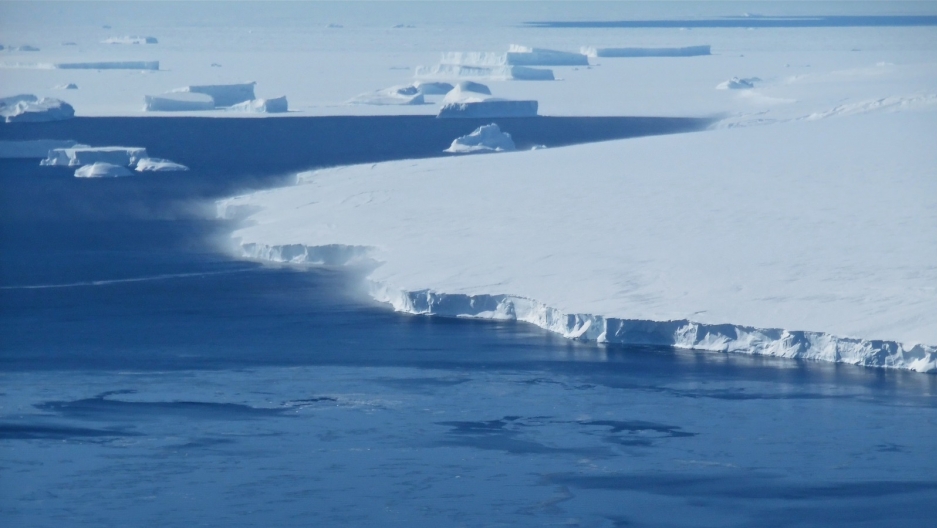 Snow is blown off of the calving front off of Thurston Island in western Antarctica in this photo, taken in November 2014. New findings show the western side of Antarctica to be more vulnerable to warming oceans — and increased ice loss — than first thought by the scientific community.

To someone living in the Earth’s Northern Hemisphere, ice loss in Antarctica may seem like a distant area of concern.

Shepherd, a professor of Earth observation at the University of Leeds in the United Kingdom, recently led a group of 80 researchers stationed across the planet to collect data, observations and insights into the ice loss of the Antarctic Ice Sheet.

The team’s findings, which were recently published in the journal Nature, show that as much as 200 billion tons of ice are being lost from Antarctica each year — a much larger number than originally thought by the scientific community. In fact, the rate of melting has tripled over the past decade, according to the new findings.

“This particular story affects those of us that live in the Northern Hemisphere a little bit more,” says Shepherd.

That’s because ice loss in the Southern Hemisphere causes sea levels to rise in the north, due to Earth’s gravitational pull.

An easier way to visualize 200 billion tons of ice, Shepherd says, is to think about an extra level of water that is 0.6 millimeters thick — adding a significant portion of the most recent assessment of 3.4 millimeters in ocean rise per year.

“In context, it used to be a much smaller proportion and the contribution is on the rise, and that's the thing that's of most concern,” Shepherd says.

Whereas Antarctica’s eastern side — the largest part of the land mass by far —remains isolated from the Earth’s oceans, the same cannot be said for the western side, the site of most of the continent’s ice loss.

Shepherd says it was long thought that the band of water around the tip of South America that connects the Atlantic and Pacific oceans — known as the Drake Passage — would not allow heat changes in other parts of the world to be transmitted through it, given the very active current traveling around. Now, that is no longer the case.

Shepherd and other scientists first started to make observations and collect data on these areas about five years ago. He admits they underestimated how much ice loss would take place during that time frame.

“We need to be thinking about an extra 20 or so centimeters of sea level rise in the Northern Hemisphere if the continent of Antarctica continues to follow the trajectory that it is actually on now,” Shepherd says. “And that will be a number of significance to urban planners. It may not sound a lot to people at home, but it will affect the frequency with which coastal areas flood today.”

Gathering from many sources

To collect the data, Shepherd and his team — which included scientists from NASA — relied upon nearly a dozen satellites that have been operating in space since the early 1990s. Using devices known as altimeters, the satellites were able to measure Antarctica’s height — and get detailed data on changes that have taken place over time. In addition, the team was able to monitor the rate of glacier flow using a variety of tools, ranging from high-tech equipment to photographs taken from space through the satellites. One of the pieces of equipment is a sensor that can measure the Earth’s gravity field.

“Believe it or not, changes in the ice loading on planet Earth at the poles do affect the microgravity that the satellites sense in space,” Shepherd says “And so we can use those measurements as well to calculate how much ice is changing.”

For their study, Shepherd and his colleagues also monitored Greenland, a massive country near the North Pole that began experiencing significant ice loss as early as 30 years ago. Given that Greenland sits a considerable distance from the North Pole compared to Antarctica’s immediate relationship with the South Pole, it is quite common to see much of the ice loss through melting. In the summer, Shepherd says, Greenland can reach up to 20 degrees Celsius (68 degrees Fahrenheit) with regularity — a trend that has been take place for at least 20 years.

The narrative was always different for Antarctica, though, in the scientific community.

“We were all very surprised. We didn't expect Antarctica to jump up there in terms of its ice losses and start to rival Greenland, but that's happened,” Shepherd says. "And part of the reason that we're reporting Antarctica now is because it's an important piece of information, such a high profile piece of information, we think that people need to be aware about it.”

Although the findings from the recent report may add to a collective sense of apocalyptic-like pessimism, Shepherd prefers to look at the situation with a different perspective.

“Doing nothing is the threat and knowing nothing is the threat. Knowing something is definitely not a threat,” Shepherd says. “Knowing something is being prepared for action, and I've been very pleased about the impact that this work has had. People are interested to learn about it and I hope that that means that people have listened and heard the message, and the politicians who are ultimately responsible for changing the course of our futures will act on that.

“So, I don't see it as a bad news story. I think it's really good news that we're able to tell people that they need to be concerned — because we can act.”