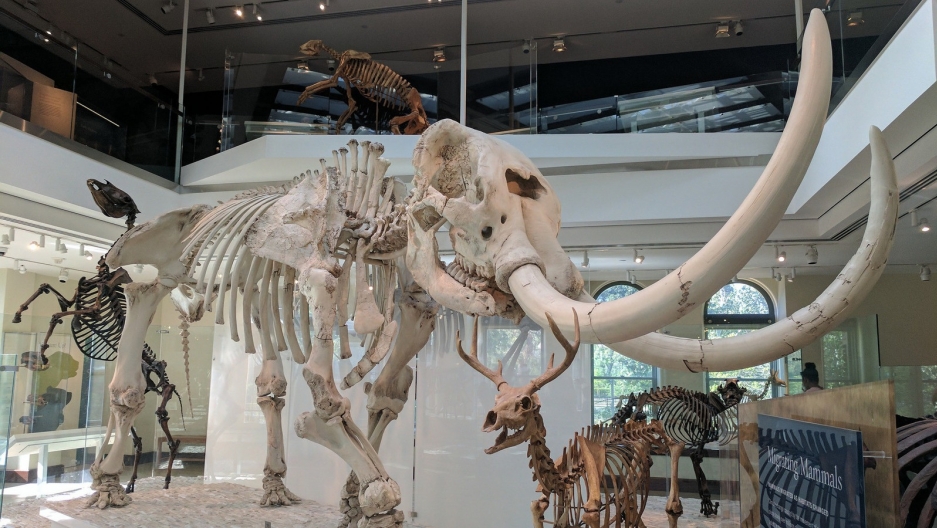 Mastodons (this one on display at the Natural History Museum of Los Angeles) are just a small part of the story of how humans first migrated to the Americas 15,000 years ago — or longer.

For many Americans, the summer months mark a time of exploration on vacations that take people down the road, across the country or even around the world. Most travelers, though, would never think of taking the time to go on a trek that Craig Childs recently took.

Childs has published more than a dozen books that explore the intersections of adventure, science and the wild outdoors, but one of his recent journeys may have been his most ambitious to date.

To provide material for his newest book, “Atlas of a Lost World: Travels to Ice Age America,” Childs retraced the waterways and footpaths of those who first entered the Americas some 15,000 years ago via what was then the Bering Land Bridge in modern-day Alaska.

“I think it's a blank space in a lot of peoples’ knowledge about the Americas,” says Childs about the Ice Age. “You might think of Clovis. You might think of mammoths, but it's a much more complicated story. I want to take this blank space and fill it in and show this incredible moment where a side of the planet that had no people suddenly did have people. This is, in a way, a scientific creation story for this continent.”

For his journey — and the sake of the book — Childs says he wanted to travel in a “social way” to simulate how the ancient travelers made their way. He and his family joined a group of other families to explore south-central Alaska. They had several children with them on the trip — including his own — ranging in age from 4 to 12 years of age. In one of the more remote and wild places on the planet, the group moved from island to island in boats, with the parents going ahead to check for any signs of bears at the next island, he says.

“Having kids in Big Bear Country is just an intense experience in general. I mean, I've traveled in Alaska quite a bit, and it's a place where it's a little wilder,” Childs says. “It's a little bit more edgy, and it gives me a sense of maybe the Ice Age was a hundred times wilder. The animals are so much larger and the predators are numerous and huge, so what would it have been like to have had kids there?

“But when you're with kids, it's a whole different story. You're paying attention to things on a very different level. It's no longer about you. It is now about the adventure of your children.”

When it came to the actual journey made by ancient peoples, most of the traversing Childs says was most likely done in boats made of wood frames and animal skins — and not by foot — due to the fact that crossing the land bridge meant eventually confronting a vast polar wasteland that spanned about 2,000 miles before one could again touch the ground.

One of the biggest increases of migration into the Americas was caused by a period known as the Younger Dryas, which took place about 12,000 years ago. With glaciers retreating and rivers and lakes popping up everywhere, the planet went back into full Ice Age conditions within about 10 years.

“It was like a pool cue hitting balls and just sending them every direction,” Childs says. “This was the sudden change. People had to adapt. They had to find new niches, and so it kind of divided everybody up.”

Childs says that before the Younger Dryas, there was more of a sense of uniformity, with people using the same weapons both in present-day Maine and California. That all changed.

“It was the Babylon moment where languages divided, technologies divided and we ended up with the foundation of the continent we see today,” he says.

‘You feel time in a different way’

Although Childs based his travels at the first migrations that would date back to approximately 15,000 years ago, his book mentions a recent archeological find near San Diego of the bones of a mastodon that could very well date back 130,000 years. The way the bones were found with shattered points of contact from a heavy tool, as opposed to just natural decay.

“It looks like an organized site that somebody took a big bone from a mastodon and smashed it and maybe got marrow out of it and left tools there,” Child says. “You could argue that they were trampled, but the bones looked like they were worked by humans.”

Tools and weapons such as the one found at that dig site are mentioned throughout the book — as Childs sees artifacts such as those as portals for modern-day humans to be transported back in time.

“You feel time in a very different way,” Childs says. “It's making contact with a time that we don't have. I mean, most of our lives we're touching things that were just made a month ago or a year ago where everything is getting newer and newer, and I want to remember what it was like.

“I want us to have a context of how long humans have been doing this and touching this object is a way of making direct contact with those people.”

Besides the Younger Dryas, another catalyst for migration is something known as the dopamine receptor called D4. Those who have it in their genetic makeup tend to take more risks and go on longer explorations than those who do not. Childs says overall that as one goes from the Arctic and continues to traverse south — all the way to the southern tip of South America in this case — one can see an increase in the number of native peoples who have D4 dopamine receptors.

“So, there is evidence that there is a genetic drive to go farther, and some people do it, and they carry those genes and they carry them all the way to the end of the Earth. I know people who must have just D4 … just chock full, because they don't come back,” Childs says. “They just keep traveling. I find them somewhere else out in the world and I think, ‘You are the real explorer. I like to come home.’”