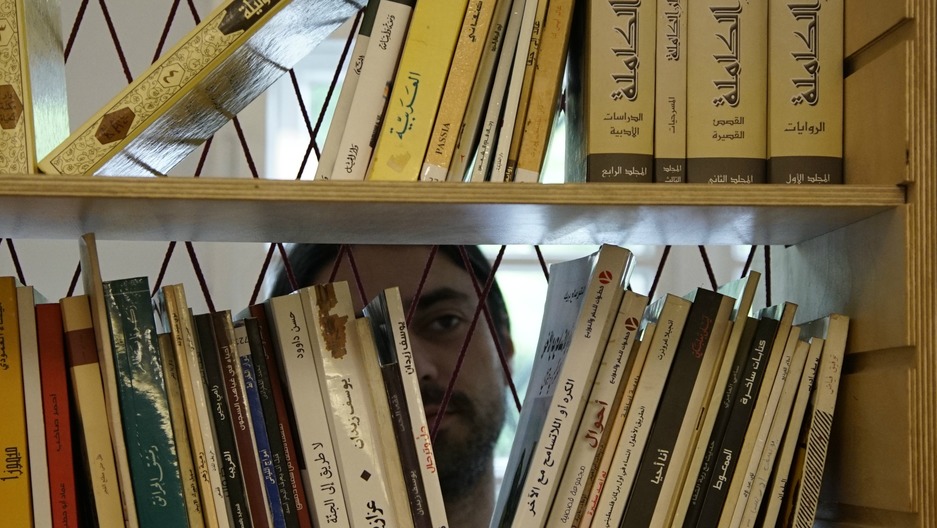 Muhanned Qaiconie, a co-founder of Berlin's first Arabic-language public library, looks at books in the collection. “All kinds of people come here,” he said. “We have older generations of Arabic speakers, new readers, seasoned bookworms, aspiring writers — everyone can come and enjoy the space.”

At first glance, Baynatna — “between us” in Arabic — looks like just a few hundred books, artfully arranged in a sunny room on the ground floor of Berlin’s public library.

It’s much more than that. The small collection is the first Arabic-language public library in Berlin and, according to its founders, the first-of-its-kind Arabic-language literary and cultural center in the German capital, which is now home to tens of thousands of Syrian refugees.

“There are so many Arabic speakers in Germany,” Maher Khwis, one of the founders of the library, told PRI. While it is possible to find Arabic-language books in university libraries and select bookshops in Berlin, these spaces are not always accessible to everyone — particularly refugees.

“We needed this space for Arabic language books; it is our mother tongue and the language of our poetry,” said Khwis, who formerly owned a publishing house in Syria. “It is not right to come here and throw it away.”

So, Khwis and four other volunteers — fellow lovers of literature — got together and put out a call for Arabic book donations. They organized with students from the local technical university to build custom bookshelves and tables, designed to be moved and stored easily in case of a change in location. One volunteer, Muhanned Qaiconie, put out a call on social media for people to come to help decorate the library by weaving rugs out of old clothing. More than twenty people showed up.

“In Syria, we do not have this culture of doing something without being paid,” Qaiconie explained. “It is really nice to experience the volunteer spirit in Germany, and be able to create this space.” 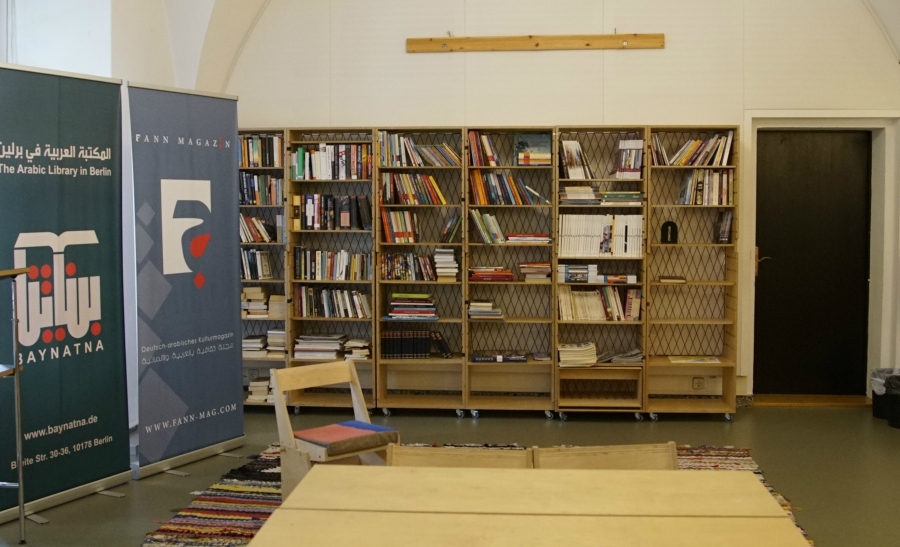 The library is built out of custom bookshelves and tables that are designed to be moved and stored easily, in case of a change in location. The space is decorated with rugs woven from old clothing.
Credit: Anna Lekas Miller/PRI

Within a few months, the library had several hundred books, from sophisticated political tomes to children’s books, as well as beautiful furniture and a space to welcome visitors and host events.

“All kinds of people come here,” Qaiconie continued. “We have older generations of Arabic speakers, new readers, seasoned bookworms, aspiring writers — everyone can come and enjoy the space.”

Germany — particularly Berlin — has been home to a diverse community of Arabic speakers from across the Middle East and North Africa for decades. The population skyrocketed in 2015 when German Chancellor Angela Merkel suspended the Dublin Regulation for Syrian refugees, meaning that Syrians migrating through Europe could apply for asylum in Germany, even if they had already been fingerprinted in another European country.

Germany was suddenly the promised land. Over the next three years, more than one million refugees made their way there. Most of them were Syrian.

Now, the political realities of this decision are beginning to show a very different side of Germany.

While Merkel’s center-right Christian Democratic Union still enjoys a parliamentary majority alongside the Christian Social Union from the southern province of Bavaria, her liberal policies surrounding refugees emboldened the right wing, resulting in the far-right Alternative for Germany party gaining seats — and power — in the most recent parliamentary elections. Issues like family reunification policies and welfare benefits for refugees have become deeply controversial, causing political gridlock while chipping away at what once made Germany the promised land.

This week, Merkel was forced to make another compromise. Germany will expedite migrant screening at border transit facilities, designed to deter newcomers and deport anyone who has already registered another EU country. It essentially reverses her policy on the Dublin Regulation, making Germany’s policies closer to those of Hungary than those of Sweden.

With all of this hostility, it would be easy for the library to position itself as a literary oasis, an artistic escape from the growing uncertainty of being a refugee in Germany. But instead, it remains deeply entrenched in politics, inspiring discussions about everything from revolutionary politics and freedom of expression to what it means to be a refugee and to integrate. The library is also a place for thinking about how the politics of the Middle East and the refugee crisis plays into Germany’s past and present.

“Many refugees — especially Syrians — are coming from countries that have seen a lot of recent changes in their society,” Ansar Jasim, one of the library’s volunteer translators, explained. 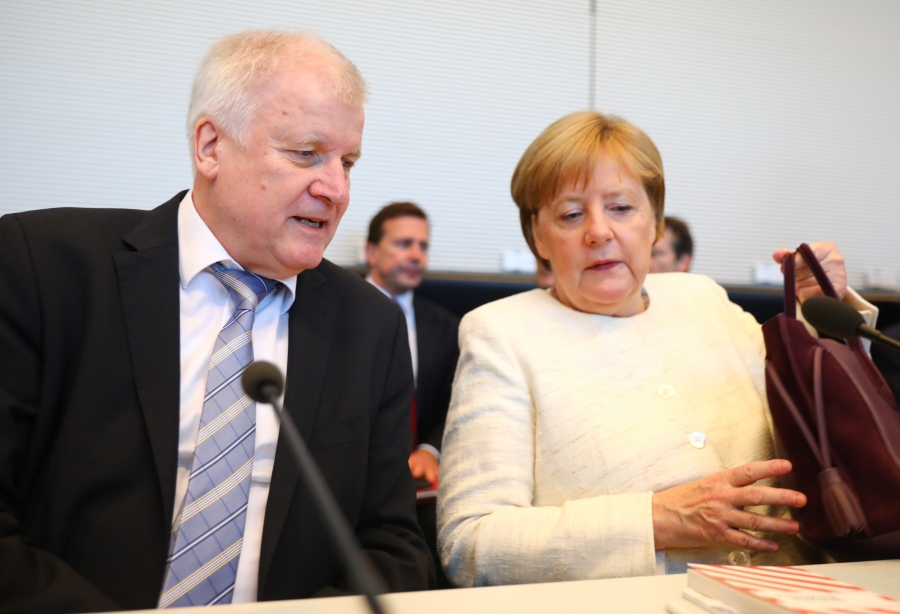 Translators like Jasim play a key role in making the library an inclusive space. While many Syrian refugees are able to study German as part of their asylum process, few have studied long enough to enjoy German literature, and it can be difficult to express complex ideas in their new language. Since most political discussions and events in Berlin take place in German or English, volunteer translators open the door for refugees to be involved, too, while allowing non-Arabic speakers to experience the library’s collection.

Over the past year, Jasim has translated events ranging from a discussion about a Syrian novel that follows the story of a Nazi soldier who runs away to Syria (and helps develop the Syrian secret service’s torture tactics) to an academic conversation about the political economy of Hezbollah and how it impacts the Middle East.

“It touches me to translate these words and discussions into German,” she said. “As a translator, I’m able to make these voices available to the German public. I feel proud to say that these are the topics that we [as Arabic speakers] talk about, not ISIS and killing each other, or sectarianism.”

Related: There are about 400,000 refugee kids in Germany. Educating them is a 'national task.'

“Many of the Syrians with us today had to really think about how they wanted to imagine politics and their political system,” she continued, elaborating on how many Syrians are in exile in Germany because of Syrian President Bashar al-Assad’s oppressive policies, which they were hoping they had the power to change in the early days of the uprising.

“Making this visible can change our perception of how we see our political system and democracy,” she said. In October, Germany will hold state elections in Bavaria that could change the tide of the far right’s influence on refugee policies in Germany.

In addition to facilitating a dialogue between Arabic speakers and German speakers, the library hopes to redefine integration. While in the political realm integration is largely thought of as refugees learning the language, and finding employment to wean themselves off of the welfare system, those involved in the library are hoping to make it a two-way street.

“We need to show people that we are an educated people, and most importantly, a cultured people,” Khwis continued. While he is enthusiastic about Syrians integrating into German society, learning from German culture and hosting German authors, artists and academics at the library, he emphasizes that true integration is an exchange where both societies strengthen each other. In addition to respecting and absorbing Germany’s traditions, Syrians must also bring the best of their art and culture to Germany.

“What we are doing here is not integrating from one culture to another, but fusing the two cultures together,” he said. “This fusion; this is something really special.”