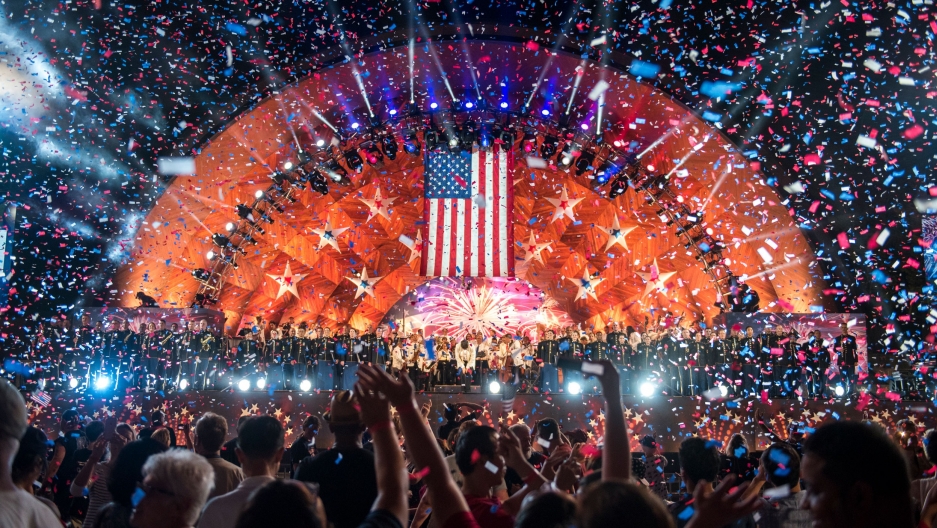 Confetti falls at the end of the Boston Pops Fireworks Spectacular in Boston on July 4, 2017. In 1974, the Boston Pops added cannons, church bells and fireworks to draw crowds to their Independence Day concert. It was so successful that the inclusion of the "1812 Overture" became a staple.

On July 4, millions of Americans celebrate Independence Day by watching fireworks synced to patriotic and bombastic music. But this year, a favorite from the fireworks soundtrack may have ironic overtones.

The piece opens quietly, with a traditional Russian Orthodox hymn, a prayer for peace. After a Russian folk dance asserts national pride, the “Marseillaise” — the French national anthem — signals Napoleon’s invasion. Five cannon shots are fired in the Battle of Borodino, a turning point in the war. The French are driven from the field, and the opening chant returns triumphantly, this time with full orchestra and cathedral bells.

Related: He'll eat a piece of the July 4 cake to celebrate 5 years of being an American

And just to be absolutely clear about who won, there’s the Imperial national anthem, “God Save the Czar.”

So, how did music celebrating Russia’s pushback against a foreign power become associated with America’s Fourth of July? It’s not even about the American War of 1812.

The answer has to do with cannons, Americans’ love of Tchaikovsky and its pop culture’s embrace of the "1812 Overture."

In 1962, Quaker Oats used it as underscoring to a Puffed Rice Cereal commercial:

In 1971, Woody Allen used it in the Film “Bananas,” as soundtrack to a fantasy love scene. And in 1974, the Boston Pops added cannons, church bells and fireworks to draw crowds to their Independence Day concert. It was such a success, the Pops made the "1812 Overture" a Fourth of July staple. Other orchestras followed suit, and a holiday tradition was born.

But is there irony this year in playing music that celebrates Russia’s defense against an encroaching foreign power while Robert Mueller and his team investigate possible Russian interference in the American democratic process?

Of course, irony is no stranger to the American patriotic canon. “The Star-Spangled Banner” is set to the tune of an English drinking song. And “My Country ‘Tis of Thee” borrows from the British national anthem, “God Save the Queen.”

Sheryl Kaskowitz, a scholar of American music, says when the source of both the words and music are known, the song carries a dual meaning: “The words can be a direct protest to the tune. You have both associations.”

Americans don’t seem to care all that much about where their patriotic songs come from. If a piece of music is flexible enough to serve the needs of the moment, we seem happy to use it. Kaskowitz, who wrote the “God Bless America: The Surprising History of an Iconic Song,” says that song, by Irving Berlin, is a prime example.

“It’s been used to support war, and to support peace,” Kaskowitz notes. “It’s been a civil rights anthem, but also used to uphold the status quo. It means different things to different people, even singing it side by side.”

Russians are better schooled in their cultural history, especially their classical music. When Tchaikovsky’s "1812 Overture" was performed in Russia during the communist era, the Czarist anthem was replaced with music by another composer.

Michael Zaretsky, a violist in the Boston Symphony and Pops who grew up in the former Soviet Union, says that Tchaikovsky is the most loved and popular Russian composer, and Russians not only know the "1812 Overture," but are very proud of it.

So, does it seem strange that Americans have adopted it as a patriotic work?

Zaretsky laughs, and says: “First time I played '1812 Overture' here in the United States as part of Fourth of July celebration, I was quite surprised why Russian music is played in celebration of American Revolution.”

Keith Lockhart, conductor of the Boston Pops, has an explanation.

“People love the pomp and circumstance of it, and I think they love the bombast. And who doesn’t like a great orchestral composition where you get to blow things up in the middle of it?”