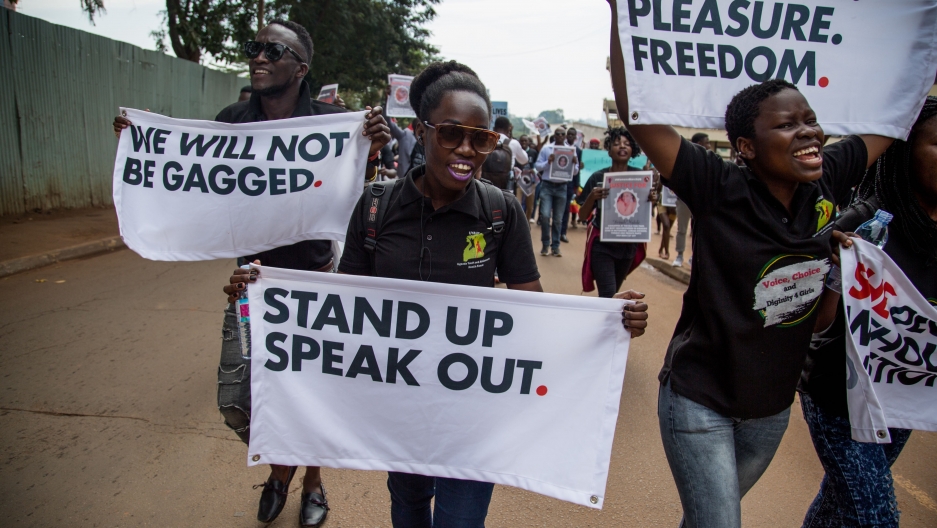 Men and women took to the streets of Kampala to stand up for women's rights.

“Rose, Emily, Beatrice, Juliet ...” the long list of murdered women kept the audience of 300 people captive as it was being read out loud through the speakers. Some cried and some screamed in anger, and at the end of the 42 names, everybody looked defiant: “No more killings.”

On Saturday, what began as a small group of Ugandan feminists calling on people to march with them through the streets of Kampala, turned into an historic day full of drums, rainbow flags and music. The people walking were from all echelons of Ugandan and international society: Men and women, children, activists, teachers, sex workers, ambassadors and concerned citizens gathered together with one message.

Related: 23 women have been murdered in these Ugandan towns since May. Police blame witchcraft.

The message was clear: Ugandan women are sick of living in fear and demand answers and accountability for the murders of more than 40 women, a macabre trend here since 2015. Last summer alone, 20 bodies were found in the space of a few months throughout Wakiso district — some mutilated, others raped and strangled. Other than gender, there were no specific targets: some of the victims were shopkeepers, others were students, sex workers and housewives. Nobody has been found guilty for any of the crimes, and for awhile, a curfew was installed in a couple of towns, but no real action has been taken. 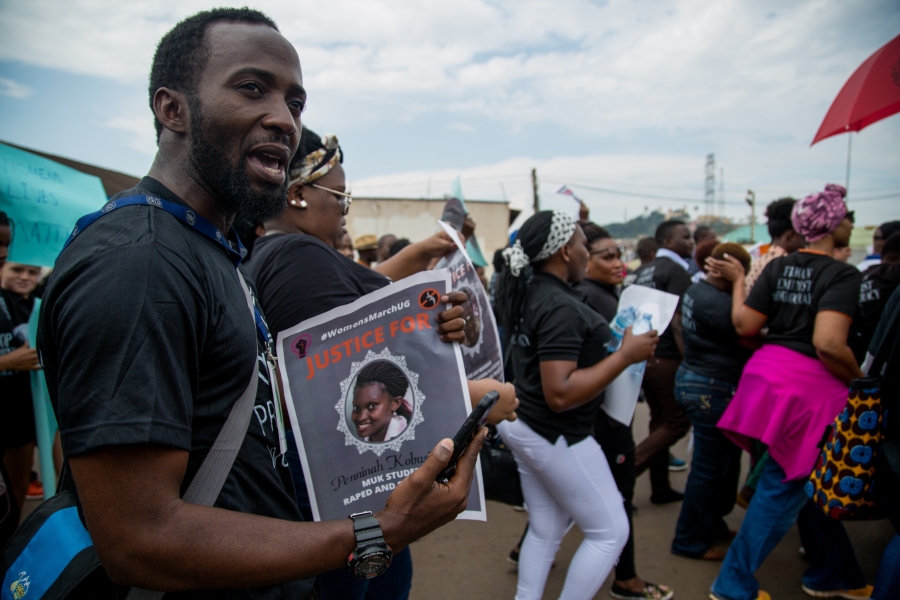 Men and women carried posters with the photos of women that have been murdered in the past years.

The first ever protest of its kind in Uganda, it was organized online by a newly formed movement, the Women's Protest Working Group, which has three main demands: One, that the police set up a dedicated team to investigate the murders and kidnappings; Two, that the police desist from victim blaming; Three, that the police prioritizes, prevents and delivers justice on gender-based violence.

A new wave of feminism

But on Saturday, the protest also became a symbol for a new wave of Ugandan feminism: the way has been paved and these women are speaking out.

“This demonstration would not have happened without feminists,” says Leah, a young Ugandan woman, self-proclaimed feminist. “We would never have gotten to this stage. Uganda has never really had social movements. In the past, we haven't really come to the streets demanding for change mostly because we live in a very repressive state and it also hasn't been in our culture to do so.”

Every movement needs a figurehead, and this one is being led by professor and activist Stella Nyanzi. A strong critic of the current government, Nyanzi was detained in a maximum security prison last year for insulting Ugandan President Yoweri Museveni on her Facebook page. After being released, she has continued to campaign for women's rights and what she perceives as a lack of democracy and justice in the country.

Related: In northern Uganda, these women move past insurgency by baking cakes

“We are showing that women's lives matter indeed,” Nyanzi said as she addressed the crowd.

A ferocious woman, she swears and openly talks about sex which often draws criticism from many: but someone has to make noise, and her noise is turning into actions. 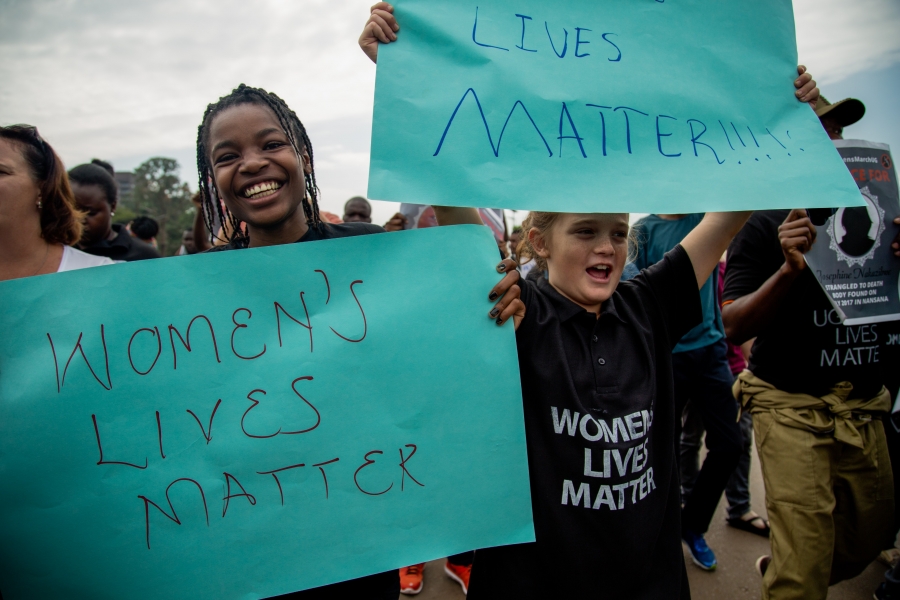 Only a couple of weeks ago, Nyanzi and a small group of followers were met by a heavy deployment of armed riot police as they attempted to start a dialogue with police in order to get permission for this demonstration. Several were arrested and, up until late last Friday night, police had rejected the request to gather.

Asan Kasingye, the assistant inspector general of police who was in charge of dealing with the demonstration, explained that while it wasn't permitted, it is police duty to follow the public order management act.

“I think that the women must take this on from now and make sure that women issues take center stage in this country,” human rights lawyer Nicholas Opiyo told PRI. “But it's too early to say this has shifted the practice of the police. What has happened in this case was a result of sustained pressure from the women's group and I think they yielded to that pressure.”

The American ambassador to Uganda, Deborah Malac, who attended the protest in solidarity, attested to the importance of the right to demonstrate.

“I think it's quite important that as women — whatever our role is — but particularly as successful women, we stand up for other women,” she said. “It's important that we have a voice and we speak out when women's rights are being curtailed and women are living in fear and in danger of insecurity. I've come today to show my solidarity with not only Ugandan women but women in the world over so that we can all find a better world when girls and women can live free from the threat of violence.”

The reality is that indeed the threat of violence continues to haunt Ugandan society. On June 4, Sara, a local market vendor, jumped in a local taxi-bus with her 9-year-old son. Moments later, a group of men inside the vehicle masked themselves and asked her if she was aware that women were being kidnapped. 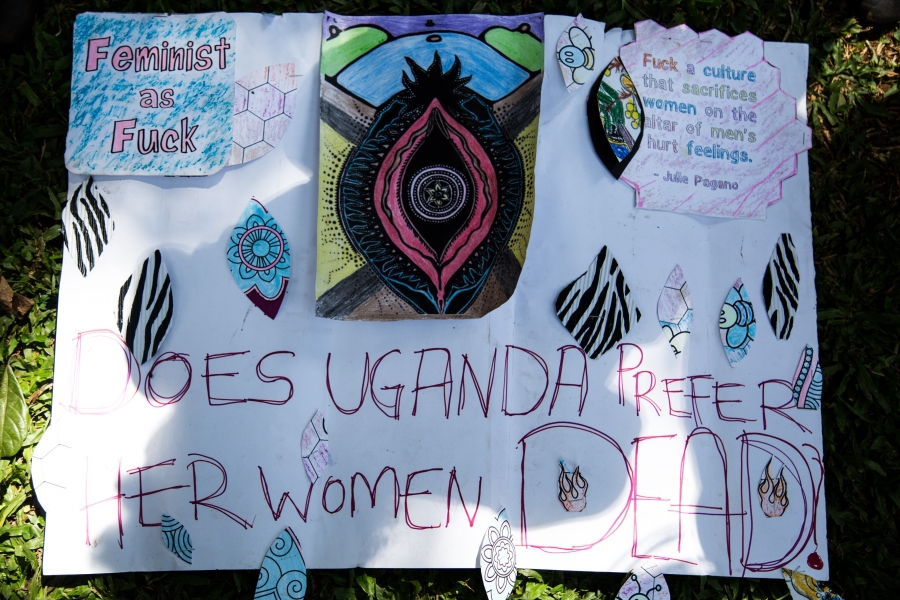 A sign in support for women in Uganda and feminism.

“When I realized what was happening, I begged them to let my son out of the taxi-bus,” she explained. “They agreed to let him go as 'he was a boy' and they were only looking for women and girls. As the driver sped up, a masked man asked me for my phone so that they could call my family to ask for money but as I didn't have one he called me a stupid girl and started slapping me around. That's the last thing I remember.”

That same night she woke up in the hospital attached to an IV drip. It seems she was found unconscious on the side of the road. Her lower body and pelvis were hurting, but she refused to do a rape test: she got out as fast as she could so that she could look for her son, who made it safely back home. She never reported this to the police — and she is not the only one, such is the lack of faith in the judiciary system.

Whilst perhaps one cannot assure women in Uganda that they will be safe, Saturday marked the beginning of a bigger display of solidarity by making sure that voices that need to be heard are heard and to let them know they're not alone.

The words of the slogans from that day continue to resonate: No more killings. No more rapes. Women's Lives Matter. 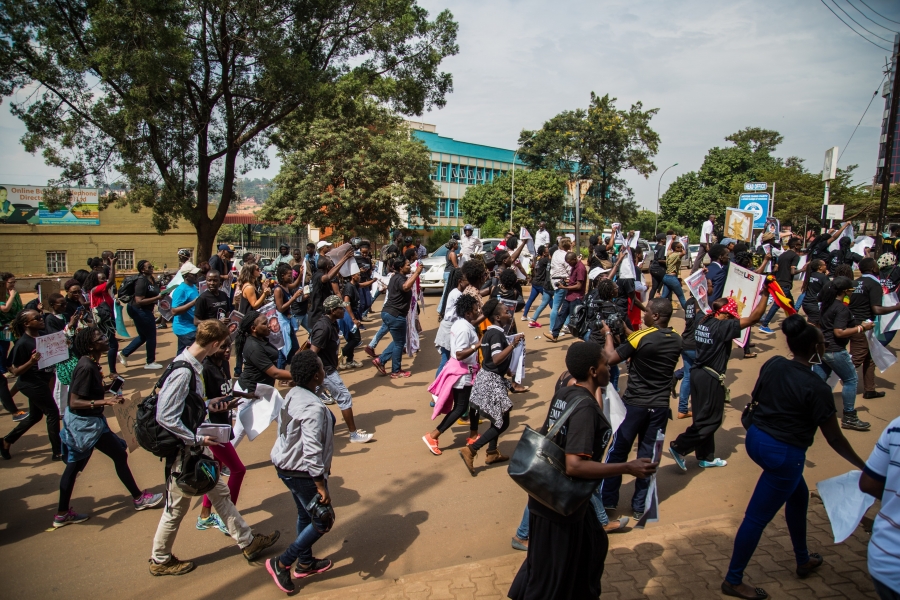