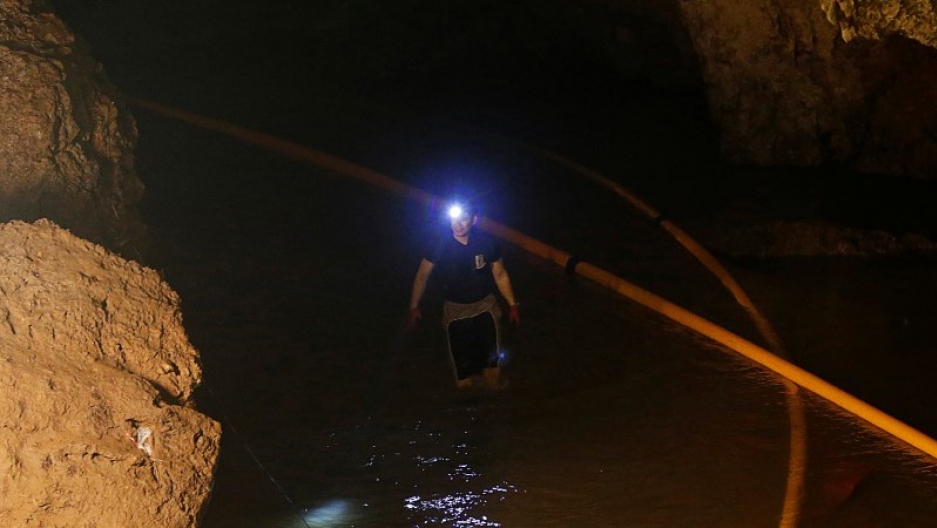 A diver walks in Tham Luang cave complex during the search for members of an under-16 soccer team and their coach, in the northern province of Chiang Rai, Thailand.

Rescuers raced to pump water from a cave in northern Thailand on Tuesday after divers struggled through narrow passages and murky waters to find 12 missing boys and their soccer coach late on Monday.

But the rescue effort is now be threatened as forecasted heavy rain are predicted to complicate efforts to free the young soccer team found trapped for 10 days.

Divers found the boys and their coach on an elevated rock about 2.5 miles from the mouth of the cave. The boys were weak, but had only minor injuries.

News of the survival of the "Wild Boar" team sparked jubilation in a nation gripped by the harrowing drama, with news websites and Facebook users celebrating their discovery and hailing the rescuers as heroes.

"Thank you all Thais, thank you all foreigners, everybody is a hero and everybody helped each other," Prime Minister Prayuth Chan-ocha told reporters.

A video shot by the rescuers in flickering torchlight revealed boys clad in shorts and red and blue shirts sitting or standing on the rock above an expanse of water.

"How many of you are there — 13? Brilliant," a member of the multinational team tells the boys in English. "You have been here 10 days. You are very strong."

"Thank you," one of the boys said.

Another asked when they will get out, to which the rescuer answered: "Not today. You have to dive." 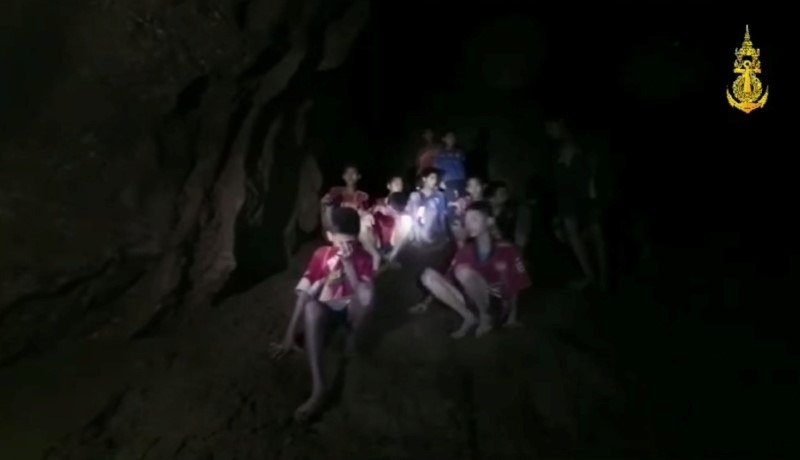 Boys from an under-16 soccer team and their coach wait to be rescued after they were trapped inside a flooded cave in Chiang Rai, Thailand, July 3, 2018, in this still image from the Thai Navy Seals.

Aged between 11 and 16, the boys went missing with their 25-year-old coach after training on June 23, when they set out to explore the caves in the forest park.

Rescuers now have to decide how best to get the group out safely, and warned it could take time. Rain continued to fall in Chiang Rai and was forecast to intensify from Wednesday, pushing authorities to double efforts to reduce water levels in the cave and try to get the boys out sooner.

"If it rains too much, water levels will rise and make getting them out harder," Interior Minister Anupong Paochinda told reporters.

At the Tham Luang cave complex in Thailand's northernmost province, security personnel turned away scores of people who came to show their support as more journalists arrived, joining hundreds of media who have covered the drama blow-by-blow for more than a week.

Two British divers experienced in cave rescues, John Volanthen and Rick Stanton, were first to reach the boys and were accompanied by a team of Thai navy SEAL divers.

The lucky 13 have been given energy gels to sustain them while extraction plans were being worked out. A SEAL team was still with the boys and lights, a power supply and communications equipment were being installed.

Options on Tuesday included waiting until water levels subside, or teaching the group to use diving gear to navigate the flooded cave. 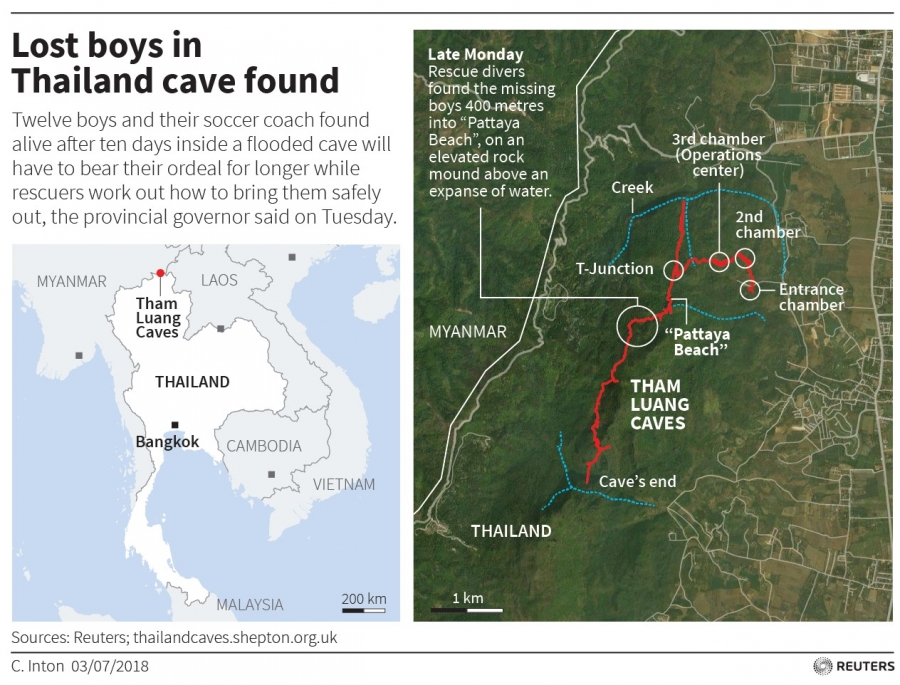 "Helping the kids will take time," said navy chief, Admiral Naris Pratoomsuwan, adding it took three hours to reach the place where the boys were found.

The divers had focused on an elevated mound, which cavers have named "Pattaya Beach," knowing that it could have provided the boys with a refuge when rains flooded the cave.

Relatives waiting at a nearby shelter were seen cheering, smiling and receiving calls after hearing the boys had been found. Rescuers congratulated each other as occasional cheers broke out, and news spread quickly enough to make the front pages of Tuesday's newspapers.

"Found the 13 Wild Boars, safe and preparing to come out," said the headline of the country's biggest daily, Thai Rath.

Cartoons with caricatures of smiling volunteers, rescue workers and media spread on social media and messaging platforms, applauding a search and rescue mission that involved citizens of Australia, Britain, the United States, Myanmar, Japan and China, among others.

"Take our hearts — thank you" said one cartoon, while another read "you are our heroes" followed by "thank you" written in eight languages.

Thais took to Facebook to post messages of joy and relief, with no shortage of praise for provincial governor Narongsak's leadership. "Have to applaud this man" said one post, while another asked "why not try for prime minister?"

Sura Jeetwatee, a doctor who is part of the operations, said the boys could walk and had survived by staying where they were and drinking water that dripped from stalactite formations.

Athisit Chainuwat, a government spokesman, said the prime minister wanted the cave drama to be "a lesson in disaster relief in the future."