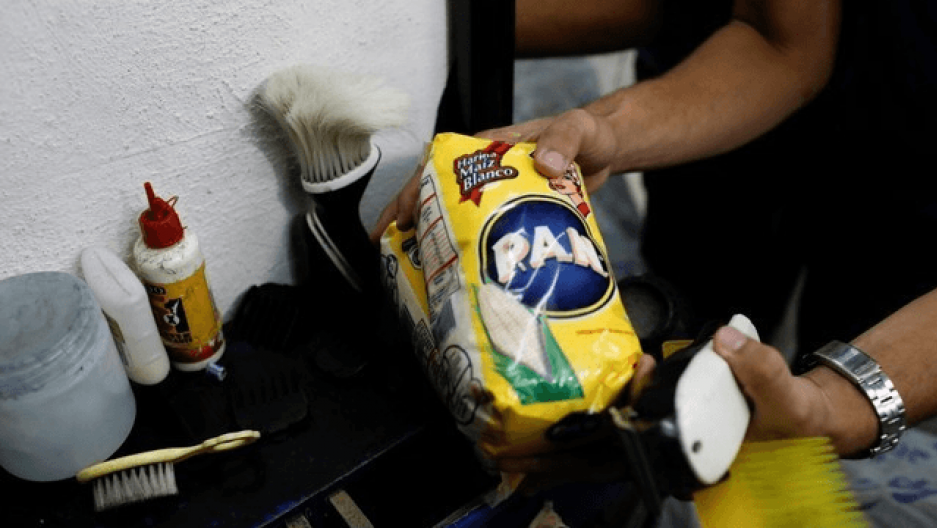 A barber holds a package of corn flour that he get as payment for a haircut in Caracas, Venezuela, June 29, 2018.

Under the midday sun, dozens of fishermen wait to sell their day's catch by a lagoon in the town of Río Chico on the Caribbean coast of Venezuela. But they aren't expecting cash in return.

Instead, they're swapping mullets and snappers for packages of flour, rice and cooking oil.

"There is no cash here, only barter," said Mileidy Lovera, 30, walking along the shore with a cooler of fish that her husband had caught. She hoped to exchange it for food to feed her four children, or medicine to treat her son's epilepsy.

In the hyperinflationary South American country, where bank notes are as difficult to find as chronically scarce food and medicine, Venezuelans are increasingly relying on to barter for basic transactions.

Payment for even the cheapest of goods and services would require unwieldy piles of banknotes, and there simply are not enough of those in circulation.

While formal businesses in cities can get by on bank transfers and debit cards, such operations are largely out of the question in rural areas such as Río Chico, population 20,000.

Even in the capital Caracas, some 80 miles to the west, many informal merchants lack access to bank services or point of sale terminals and prefer to be paid in kind.

The rise of barter exchange, amid hyperinflation and a dearth of cash, is a reflection of how the once-prosperous country is reverting to the most rudimentary of mechanisms of commercial exchange.

"It's a very primitive payment system but it's also very primitive for a country not to have enough cash available," said economist Luis Vicente León of consultancy Datanalisis.

Economists say the central bank has not printed bills fast enough to keep up with inflation, which according to the opposition-run congress, reached an annual rate of almost 25,000 percent in May.

Once one of Latin America's wealthiest countries, Venezuela's economic collapse under President Nicolás Maduro's government drove nearly one million people — 3 percent of the population — to emigrate between 2015 and 2017.

Maduro, reelected to a fresh six-year term in May in elections condemned by the United States, blames spiraling consumer prices and constant shortages of food and medicine on an "economic war" led by the opposition and Washington.

Julio Blanco, a 34-year-old motorcycle driver in Caracas, said he now allows trusted clients to make payments by bank transfer because there is simply not enough cash available.

"I prefer food as payment," said Blanco, while waiting for customers at the poor west end of Caracas. "I do services for food in order to survive."

In the hillside Caracas slum of La Vega, home to 124,000 people, Alfredo Silva offers a haircut for 1 million bolivars, about 30 cents at the black market exchange rate.

He accepts transfers or food but sometimes takes clients to a nearby butcher shop and asks them to buy him something worth the same as the haircut.

In Río Chico, Marvin Guaramato arrives at the lagoon driving a car loaded with boxes of oil, pasta and corn flour, which is used to make a Venezuelan grilled pancake known as arepas.

The fishermen scramble to swap their catch in a brief and confused frenzy. One of them, Reinaldo Armas, was satisfied to have picked up products for family members in his village.

Still, sometimes he doesn't manage to exchange his catch for anything, he says.

"Some days, I spend five hours without swapping anything and I have to take all that fish home," he said.