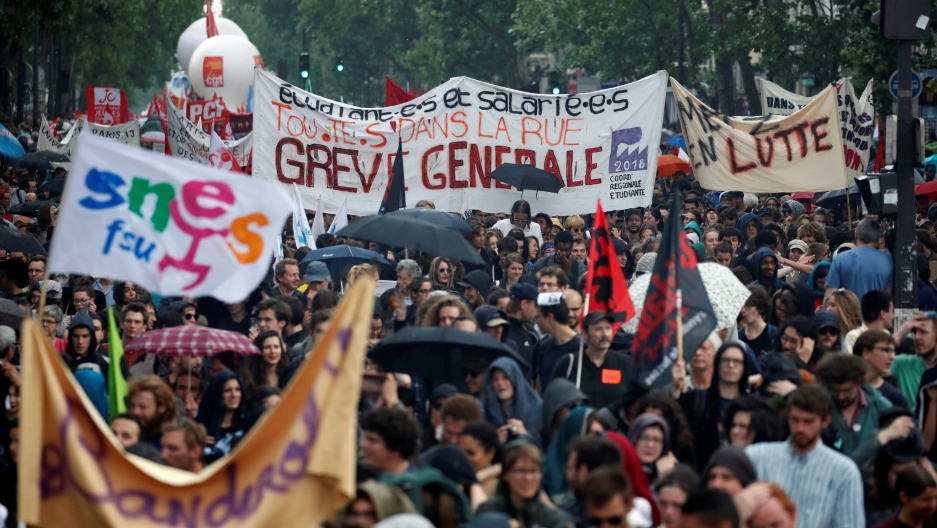 French students protest a new law aimed at making public universities more competitive. Because of the law, thousands don't have a spot when school starts up in the fall.

Until recently, Samuel Romain would say he wasn’t the most politically engaged person. In fact, the 16-year-old student says if he had things his way, he would be spending his summer days doing the things that most French teenagers are probably doing — lounging in a park with friends, sharing an ice cream, maybe working at a summer job.

But this summer isn’t like that. Romain and thousands of other graduating high school students have been heading out to protest.

“I need to come and scream to say I’m angry,” Romain says.

Romain, who’s from the immigrant suburb of Saint-Denis outside of Paris, says he was counting on going to university in the fall to study psychology. But a new law aimed at making French public universities more competitive means that might not happen.

The legislation gives public universities the autonomy to select — and reject — applicants for the first time in about 200 years. It’s left thousands of students wondering what’s going to happen when universities start up in the fall. Romain is one of an estimated 150,000 students across France who still haven’t received a single acceptance from a university — a quarter of all students who applied to a public university this year.

“[The government] wants to break the way universities work,” says Johanna Simeant-Germanos, a philosophy professor who taught for more than 10 years at the Sorbonne, France’s premier public university.

Before the changes, essentially any French student looking to attend public university in France could sign up for admission, as long as they passed their high school baccalaureate exam (in 2017, the success rate was around 88 percent). It’s a process that’s been in place since the time of Napoleon.

Public universities are also highly affordable in France. Tuition averages about 450 euros, or $525 a year.

“We are high-quality and low price,” says Simeant-Germanos, who used to tell her students that if they were attending an American university that would likely pay 100 times more.

Yet France’s open higher education has come at a high price for the government, which for years has dealt with overcrowding and high dropout rates. Only 40 percent of public university students make it past the first year. The government cites this, as well as overcrowding from a baby boom in the early 2000s, as the reason for its decision to overhaul the system in March.

Emmanuel Davidenkoff, a journalist who writes about education for France’s Le Monde newspaper, says he understands why the government made the decision to make schools in France more competitive. The problem is the lack of transparency about the process.

“The criteria [for selection] are not very clear,” Davidenkoff says. “It’s very dark and frightening for the students.”

Of the four universities he applied to, Samuel Romain was waitlisted at one and rejected by the other three. And he says that’s the norm for students at his high school in the working class suburb of Saint Denis — 65 percent of Saint Denis students applying to university this year have been shut out.

“Students from Paris have more chance than students [from the immigrant suburbs],” Romain says.

In other words, he thinks students are being selected at least in part based on what high school they go to.

Stephane Troussel is president of Seine-Saint-Denis, a cluster of northern suburbs that have been hit hard by the new education law. In May, Troussel sent an open letter to the Minister of Higher Education, Frédérique Vidal, asking her to make the selection criteria public.

“I said, in order to relieve people of this doubt … this unjust feeling of discrimination, why don’t you just publish the criteria?” Troussel says he asked Vidal. So far, she has not responded.

Vidal did not immediately respond to a request for a comment for this story. But the higher education minister has given interviews in which she has tried to assure students that most will be given a spot by September, though it might not be at one of their top choices.