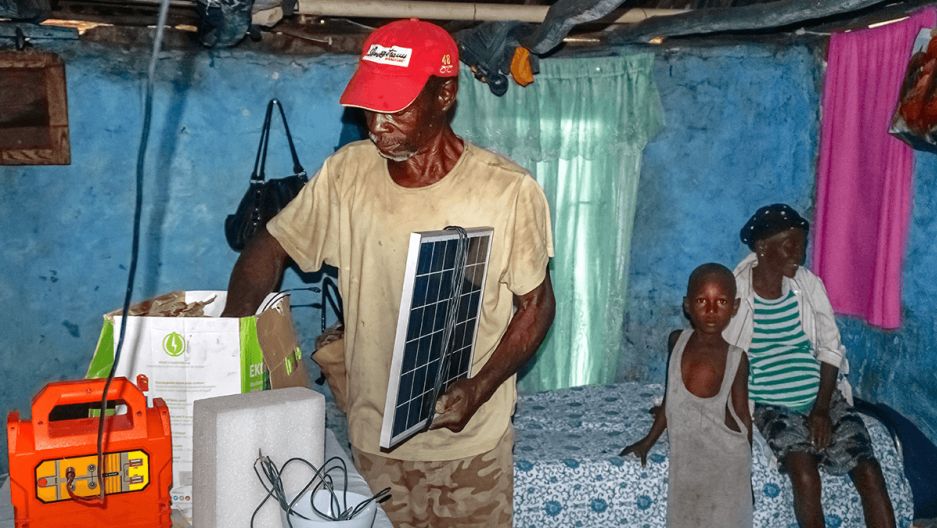 Venel Noel, a farmer living in Chansolme, shows off the solar-powered lighting equipment he purchased in November through the government’s “Ma Maison Eclairée” initiative.

In a small home in Chansolme, a municipality in northwestern Haiti, Frantzy Monfilston’s three children are finishing their homework before they head to bed.

Monfilston, a primary-school teacher at École Mixte Jérusalem d’Andreau, says that his home had no electricity for years, so his children were forced to finish their homework before sunset.

Many in Chansolme and other remote, rural areas in Haiti have limited or no electricity, Monfilston says. Students are only one segment of those hard-hit by the lack of electricity; residents struggle to complete daily chores, start and run businesses, and access information during natural disasters.

But some remote communities in the country will soon have a reliable electrical supply. 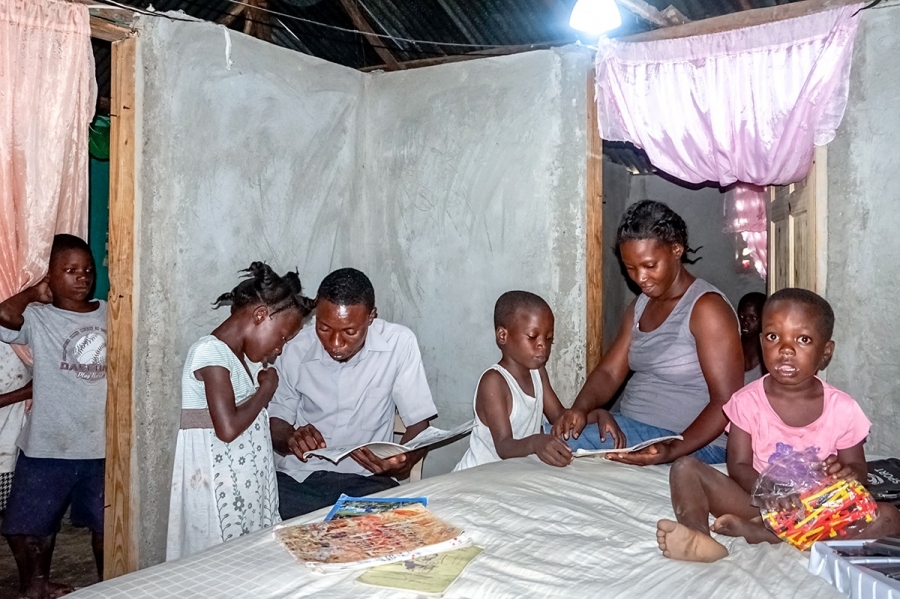 Frantzy Monfilston, a teacher who lives with his family of four in Chansolme, helps his children finish their homework. Before Monfilston became a beneficiary of “Ma Maison Eclairée” in May 2017, he says, his home had no electricity.
Credit: Marie Michelle Felicien/GPJ

Frantzy Monfilston, a teacher who lives with his family of four in Chansolme, helps his children finish their homework. Before Monfilston became a beneficiary of “Ma Maison Eclairée” in May 2017, he says, his home had no electricity.

“Ma Maison Eclairée,” or Electricity in My Home, a government initiative introduced in May 2017, is bringing electricity to an estimated 10,000 families in Haiti. “I can safely say that the electrification program will result in remote-area dwellers feeling less left out,” says Monfilston, whose family is one of 850 living in Chansolme who have benefited from the initiative, according to government officials.

Cost and infrastructure challenges have long prevented Haitian people from getting regular access to electricity, hindering key national developments in health, education and the economy. Officials and beneficiaries say the initiative is improving safety, communications and the quality of life in remote communities across the country.

Globally, more than 1.1 billion people have no access to electricity. In Haiti, only 25 percent of the population has access to electricity, according to a 2014 report from the Worldwatch Institute, an independent research organization. Many rely on nonrenewable sources of energy, including charcoal, wood fuel and traditional lamps.

Les Irois, a municipality in western Haiti with an estimated 23,374 residents, was one of the first communities to receive electricity through the government initiative. A total of 380 solar panels, 36 wind turbines and a standby generator have been installed in the municipality, Calixte says.

Ma Maison Eclairée also supplies inverters equipped with solar-panel-powered bulbs, which can charge phones and which double as radio receivers, to people living in communities without electricity, Calixte says.

The device is rechargeable but can be used for up to three days without recharging. The device, when used as a radio receiver, will allow families to access information instantly, instead of having to travel long distances to urban centers to charge their phones in order to contact relatives and friends in emergencies.

During the 2010 earthquake, the most devastating in the country’s history, Haitians without electricity were among those most affected, Calixte says.

The initiative, which costs 52.6 million Haitian gourdes ($820,000), requires beneficiaries to pay 125 gourdes ($1.94) each month over a two-year period to help cover the expense, Calixte says.

For some, this is a cheaper way to power homes. Before receiving the solar-powered device, residents would pay up to 15 gourdes (23 cents) to buy 6 ounces of gas to use in traditional lamps.

Though beneficiaries are required to pay, the devices are sustainable and free to maintain.

“In case any equipment breaks down, there’s always a technician ready to provide a repair solution that works free of charge, and people don’t have to pay a single penny for the service,” Calixte says.

To become a beneficiary, families in the communities where Ma Maison Eclairée is being implemented must register with their local government. Currently, 3,000 families either have received the solar-powered device or have access to electricity through the installment of solar panels, wind turbines and the standby generator in Les Irois, Calixte says.

For Rasita Mesi, electricity in Chansolme has improved the way her children are learning. The mother of three says her household has been a beneficiary of Ma Maison Eclairée since November. Before that, her three sons were forced to do their homework with a wick-fed lamp in the evenings.

But other remote communities across the country remain without electricity.

St Anne Estil, who resides in Bassin Bleu, a municipality in northwestern Haiti, says she and her neighbors have lived without electricity for decades.

But bringing electricity to the country’s remote communities takes time, Calixte says. Ma Maison Eclairée is in its first year of what will be years’ worth of improving Haiti’s electrical networks, he says.

A version of this story originally appeared on Global Press Journal.