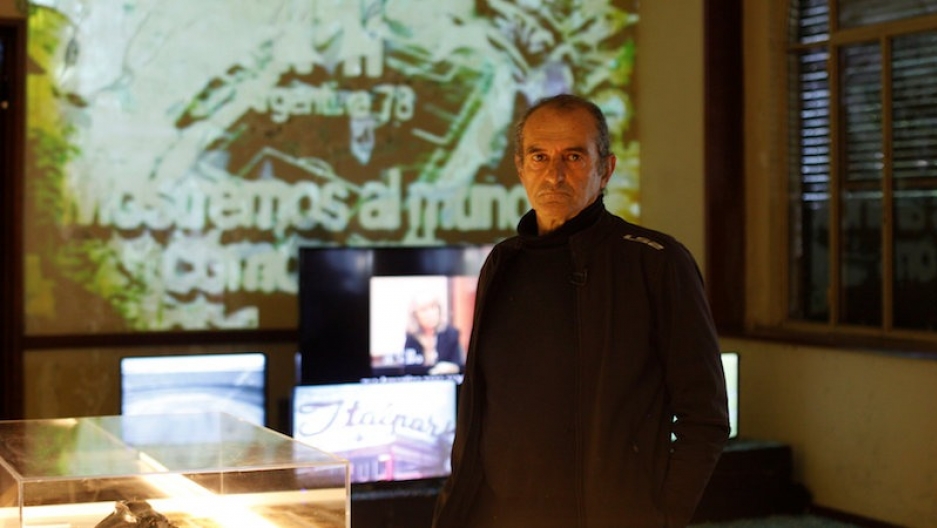 Ricardo Coquet who was a prisoner in the Naval Mechanics School (known as the ESMA), visits a exhibition about human rights at the former ESMA navy school and detention center of Argentina's 1976 military coup in Buenos Aires, Argentina.

Shackled in a lightless attic, Ricardo Coquet drew strength from the sound of cheers coming from soccer fans at the 1978 World Cup, held just blocks from the detention center where he was imprisoned by the country's military dictatorship.

Forty years later, and ahead of Argentina's World Cup match with France on Saturday, Coquet and other former political prisoners inaugurated a new exhibit at the Buenos Aires ESMA museum on Thursday. Once a Naval academy, the building became a memorial after Argentina's military junta used it as a clandestine torture site.

"This is a sacred place," Coquet said, tears welling in his eyes as he revisited the dingy attic. "When we were in here, we did not belong to the world of the living."

As many as 30,000 people were forcibly disappeared by the government between 1976 and 1983, according to Argentina's National Commission on Disappeared Persons.

Imprisoned for over two years, Coquet said he and other inmates were routinely tortured by military officers. He is missing three fingers, two of which he said were a result of his abuse.

Coquet, now 65, is one of around 5,000 men, women and children who were held at the center. More than 600 such facilities were used in Argentina following the 1976 US-backed military coup that installed a series of right wing dictators, according to the exhibit's organizers.

"Life revolves around football in Argentina" Coquet said. "But who wins a match is less important than who wins an election."

On display at the exhibit are personal affects of the prisoners, including art etched into bottlecaps and handmade playing cards prisoners would use to pass the time.

"Testimony is the most important thing we have," Coquet said. "But the goal, always, is greater justice."

Argentina defeated the Netherlands 3-1 to win the 1978 World Cup. It had stayed alive in the tournament with a controversial 6-0 win over Peru — a match that Peruvian officials accused Argentina of fixing.