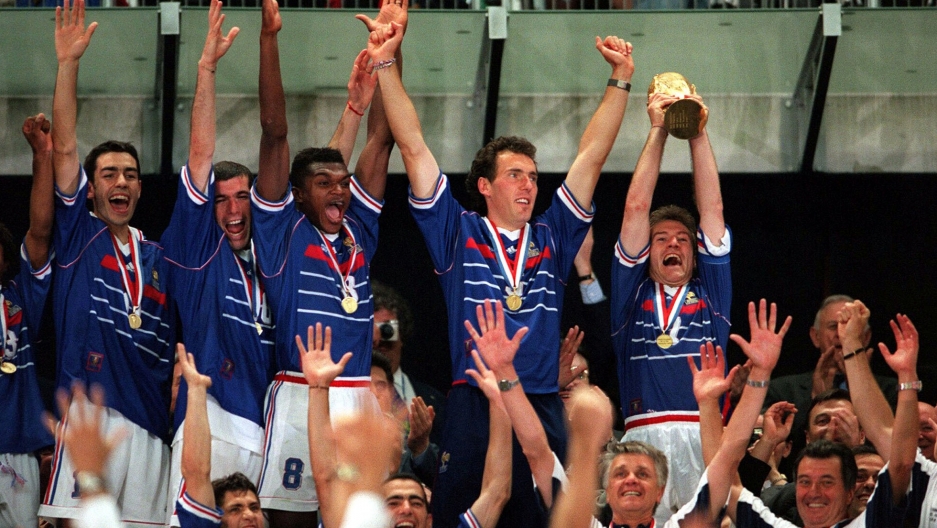 When France won its first and only World Cup on July 12, 1998, in a 3-0 upset against the favorite, Brazil, the nation erupted in delirium. More than a million people descended on the Champs Élysées in Paris to celebrate.

It was a defining moment in France’s history, says Alban Traquet, a reporter for France’s leading sports daily, l’Équipe.

“The two major moments of collective euphoria, in terms of crowds on the street, are the liberation [of Paris in 1944] and the World Cup victory in 1998,” he says.

A new French documentary looks back at the 20 years since the win that made all of France proud. It features interviews with players from that legendary team, including defender Lilian Thuram, who has this burning question:

“The World Cup victory was a defining moment for questioning what we are, as French people,” Thuram says. ”The French team was composed of players of different colors and different religions; can we also accept this in our society, outside of sports?”

Thuram was one of several black players on the 1998 team. In addition, there was the iconic Zinedine Zidane, the French player of Algerian descent. People nicknamed the team “Black Blanc Beur” — white, black and Arab — a play on the trilogy of the French flag’s colors, blue, white and red. Many French politicians parade the team’s image as a shining example of a successful, multicultural France.

Alban Traquet remembers that the day after the victory, he saw two women carrying a flag bearing both French and Algerian national colors, as a tribute to Zidane and the French team. He says it displayed a spirit of cultural togetherness — but it was short-lived.

In fact, four years later, Jean-Marie Le Pen, the far-right leader of the National Front, stunned France by advancing to the second round of the presidential election. He didn’t win, but in the past, he had famously criticized the French men’s team for including players from “foreign countries.”

Louis-Georges Tin, of the group CRAN, a coalition of black associations, says he was always skeptical of this idea of a multiracial team somehow bringing France together.

“Contrary to people who thought we’d entered a post-racial era, like when Barack Obama was elected,” Tin says, “clearly, we knew we’d still have racist issues because racism wasn’t going to stop overnight.”

Tin says even though today’s national soccer team includes an even more diverse roster of players than in 1998, the racism that you saw 20 years ago still persists, especially in sports.

“It was the case with tennis champion Yannick Noah, for example,” Tin says. “When he won, it was ‘France won,’ and when he lost, it was ‘The Cameroonian lost again.’ It happens all the time, including in soccer and its national team. When the Black Blanc Beur team won, it was a win for France, and when they lost, it was “there are too many blacks in the French team.”

Even worse, says Tin, is when soccer players are the target of racial slurs.

“Today in France, when black players enter the stadium, you can often hear some fans making monkey noises,” Tin says. “There have been instances where a player got sanctioned — instead of the offenders — when he complained.”

Just last month there was a violent incident in Corsica. When a soccer team from the port city of Le Havre arrived to play a game, their bus was attacked by local fans who threw rocks and chanted racist insults. The game had to be rescheduled. But when it finally was played, there were more insults hurled at a black team member. France’s professional soccer league says it’s investigating.

Traquet, the sports reporter, says while it’s true the “Black Blanc Beur” spirit of 1998 didn’t lead to significant progress on racial attitudes in France, some things have changed. For instance, he says the team inspired many talented young players from disadvantaged backgrounds to pursue soccer professionally.

“What is certain is that soccer is one of the most popular sports today and that it is inclusive,” he says. “For kids in training clubs, they learn that the best members play. It’s obvious today when you see that we have a very diverse French national team, and it’s the best players who are in it.”