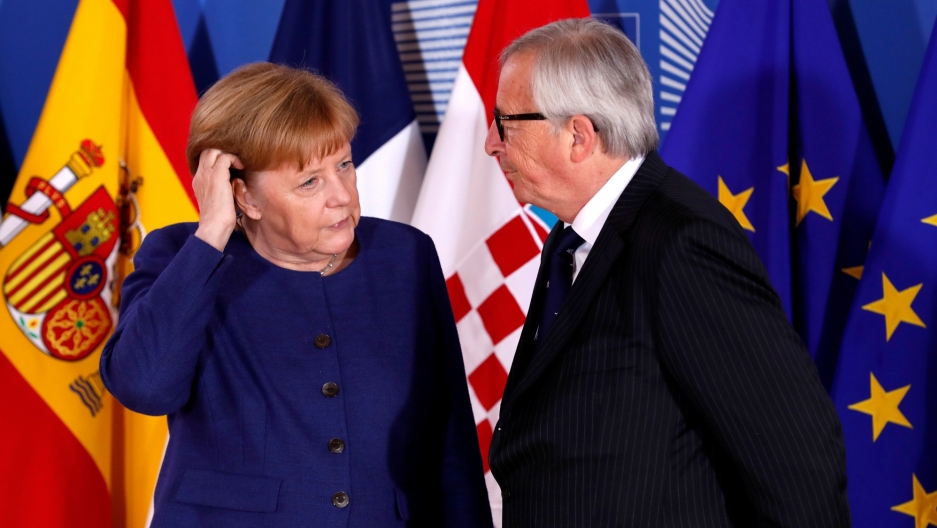 German Chancellor Angela Merkel is welcomed by European Commission President Jean-Claude Juncker at the start of an emergency European Union leaders summit on immigration at the EU Commission headquarters in Brussels, June 24, 2018.

German Chancellor Angela Merkel, speaking in the German parliament before a European Union summit, called on European leaders on Thursday to forge a common approach to migration, calling it a "make or break" issue for Europe.

The European Union summit starts later on Thursday and is expected to be dominated by migration at a time when right-wing parties are gaining strength across the bloc.

"Europe faces many challenges, but that of migration could become the make-or-break one for the EU," said Merkel, whose political future is threatened by a backlash against her migration policies from hardline conservatives in Bavaria.

At the two-day summit, leaders will agree measures to restrict arrivals across the Mediterranean, spend more on fighting illegal immigration and step up cooperation to prevent refugees and migrants from moving within the bloc, according to a draft statement.

But three years after more than a million people entered Europe — many of them refugees fleeing conflicts in the Middle East — leaders remain divided over how to handle asylum seekers.

Merkel is under pressure from the Bavarian Christian Social Union (CSU), which faces a regional election in the fall, to stem immigration to Germany more aggressively even though arrivals have fallen sharply from their 2015 peak.

With Bavaria the main German entry point for migrants, the CSU has said it will start rejecting those registered in other European states at the border from next month unless Merkel delivers a deal in Brussels.

That seems unlikely given divisions between the EU's 28 member states. But Merkel indicated in parliament she would pursue a "coalition of the willing" by trying to strike bilateral agreements with countries such as Greece and Italy.

Greek Prime Minister Alexis Tsipras told the Financial Times he was open to a deal with Berlin to curtail "secondary migration" of refugees who arrive at the EU's southern border before heading north.

Italy may prove more difficult. Its new government has rejected any moves that would see it handle more people.

At stake is EU members' unity and trust in each other, as well as the Schengen zone of control-free travel. A breakdown of Schengen would hit business and personal travel across the bloc, threatening jobs among the EU's half a billion people.

Differences between EU leaders have played out prominently in recent days before what is certain to be a fraught discussion behind closed doors.

In public, they will attempt a show of unity to persuade voters they are in control and there won't be a repeat of 2015. Opinion polls show migration is a top concern for EU citizens.

One idea is for "regional disembarkation platforms" around the Mediterranean, where the EU would hold people who attempt the dangerous crossing, assess their asylum requests and hold those who fail before they are sent back.

There are many legal, security and rights-related challenges to the plan and no country outside the EU has so far been willing to host such sites.

The EU hopes UN agencies for refugees and migration would run such centers around the Mediterranean.

"People rescued in international waters should be quickly brought ashore in safe locations in the EU, and potentially elsewhere too," the two agencies said in a joint statement before the EU summit.

"The approach needs to be complemented by more resettlement places, family reunification and other solutions within the EU, and increased support to countries where people are disembarked."

No quick decisions are expected, but the EU hopes backing for such an idea would be enough for Merkel, Italian Prime Minister Giuseppe Conte and others to stave off challenges from those advocating a yet tougher course back home.

The summit chairman, Donald Tusk, says the stakes are high.

"More and more people are starting to believe that only strong-handed authority, anti-European and anti-liberal in spirit, with a tendency toward overt authoritarianism, is capable of stopping the wave of illegal migration," he said.

"If people believe them, that only they can offer an effective solution to the migration crisis, they will also believe anything else they say," he added. "Time is short."

By Gabriela Baczynska and Noah Barkin/Reuters