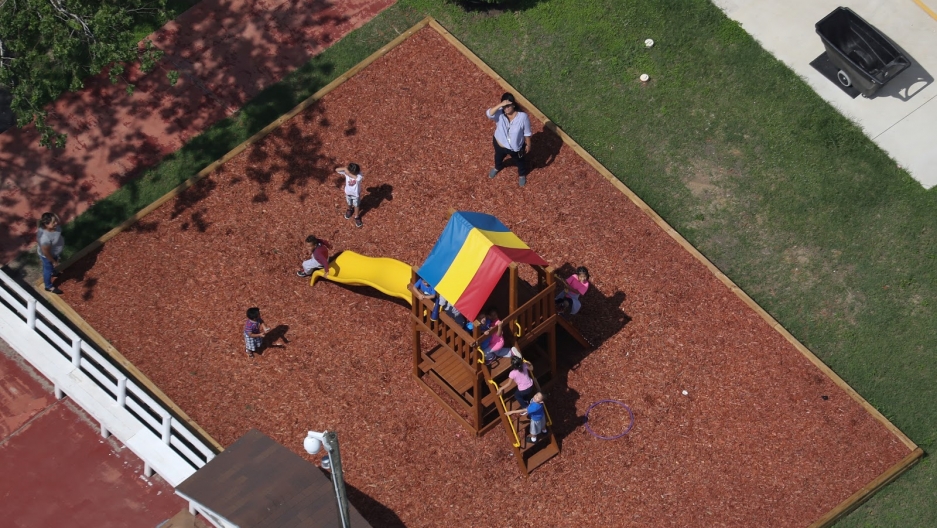 Migrant children spend time outside at Casa Combes, a shelter for migrant kids in Harlingen, Texas. Photographed on June 23, 2018.

The government now faces hard deadlines to reunite children and parents separated at the border.

The June 26 nationwide injunction, issued by US District Judge Dana Sabraw in San Diego, ordered the government to end its family separation policy and speed reunifications — a response to the aftermath of the Trump administration’s “zero-tolerance” prosecution of migrants at the border.

Now, the government has one month to reunite families, and 14 days for cases involving children under age 5. The order also blocks the government from deporting parents without their children.

The order responds to a class-action lawsuit by the American Civil Liberties Union (ACLU) on behalf of families separated at the US-Mexico border, including those who presented themselves a ports of entry. The plaintiffs include a mother and young child from the Democratic Republic of the Congo separated while seeking asylum and whose case made headlines in February. Sabraw denied the administration’s attempt to toss out the suit.

In his order, Sabraw, who was appointed to the court by President George W. Bush, called the family separation practice “brutal” and “offensive” and slammed the government for having no plan for tracking or reuniting families. He said the government keeps better track of detainees’ “personal property” than accounting for their children.

“This is a startling reality,” he wrote.

The Justice Department argues that President Donald Trump’s June 20 executive order, which instructs government agencies to stop separating parents from children at the border, made the injunction unnecessary. Indeed, there are signs of a return to pre-”zero-tolerance” policies, when families apprehended at the border were released together and placed into programs that bond payments, ankle monitors or check-ins with immigration authorities as conditions for release.

Yet there are significant doubts about whether separations will stop in the longer term or if there will be a return to family detention — which raises capacity and legal questions about how long the government can lock up children.

In an emailed statement, a Justice Department spokesperson said that this week’s order makes it “imperative that Congress finally act to give federal law enforcement the ability to simultaneously enforce the law and keep families together.” The spokesperson added, “Without this action by Congress, lawlessness at the border will continue.”

Regardless, the government might be challenged to meet the deadlines set by the court. Families have been split and put on different, complex tracks involving a jumble of agencies. Toddlers, often unable to communicate information about their parents or families, have been sent to shelters far from where their were held parents. Parents, too, struggle to advocate for themselves or communicate with their children from within detention centers. Immigrant rights groups, such as the American Immigration Council, are pressing for detailed reunification plans. They say information has been “largely hidden from the public.”

The Office of Refugee Resettlement (ORR), under the Department of Health and Human Services, manages the custody and release of unaccompanied minors, those who cross the border alone or have been labelled that way after being separated from their parents. In a June 26 press call, ORR director Scott Lloyd said there were “around 11,800 children” held at shelters nationwide, of which 2,047 remained separated from their parents with whom they arrived.

“We are working across the inter-agencies to facilitate reunification of each child with their parent or family as soon as that is practical,” Lloyd said.

To hear more about the ACLU’s case, PRI’s The World spoke with Lee Gelernt, deputy director of the ACLU’s Immigrants’ Rights Project in New York, and lead counsel in the case. He has worked in immigration law for more than 25 years.

Trump administration shifts stance on family separation
The World
Wednesday, June 20, 2018 - 12:00am
President Donald Trump has signed an executive order that ends his administration's policy of separating migrant families at the border. Instead, the order says, they will be kept together in detention as their legal cases are resolved. But major questions remain unanswered and legal challenges are mounting. Host Marco Werman speaks with The World's Global Nation editor, Monica Campbell, and we also hear from Lee Gelernt of the ACLU.

The World: What is at the heart of the ACLU’s lawsuit?

Lee Gelernt: We have said that it is unconstitutional for the president to separate parents and children. The government should not be taking away children under our constitution unless there is a danger to the child from the parents and that’s not what’s happening. The government is just flat out doing its best to deter future asylum seekers from coming here or to convince parents who are already here to give up their claims.

The ACLU filed this lawsuit in late February, before the June 20 executive order that the administration said would stop family separations. Has that order changed how we should view the ACLU’s case now?

The executive order doesn't change anything. There are explicit loopholes in the executive order. Among other things, it says that the administration can still separate parents and children whenever it believes it's in the interest of a child.

The executive order also doesn't speak at all to reunifying separated families.

The head of US Customs and Border Protection said that it is no longer criminally prosecuting adults who arrive at the border with children. Is that the case?

Even if they stop prosecutions, children still may be separated based on the government's claim that it's in the best interest of the child. The executive order doesn’t bar them from doing that. What we're saying is, of course, we don't want children sent to smugglers, but there is another way to verify whether someone is the actual parent.

Can you talk more about the loopholes that concern you in the executive order?

The whole executive order is written as a way to see this as temporary and contingent upon various other situations.

The most explicit concern is how they interpret the best interest of the child. No child expert would say the best way to handle a situation is to send a little kid to a facility for four months by herself, rather than verifying whether the person was actually a parent. They also say that we don’t have space to detain families together, so we're not sure how they're going to handle that.

What could be the immediate results of a nationwide injunction?

Reunification of families is going very slowly. Could a government appeal buy it more time to do this?

The injunction is in effect unless the appeals court puts a stay on it. The government also says it will only reunite kids with parents who are to be deported or receive asylum, but not while they are in detention or pursuing asylum, which could keep them in detention for a very, very long time. Finally, the government says it will continue to use the old reunification process. That wasn’t designed for rapid reunification. It was designed for kids who were genuinely unaccompanied because it would take the government time to find someone to take them in.

As a lawyer, you are with clients in courtrooms and conversation often unseen, what would you like to see what you see?

I think I would have liked everyone who thinks maybe it’s okay to separate these children to have been with me in this Congolese family’s house last week in Chicago. The mother was fleeing danger. She had passed her initial asylum hearing, but she still had her boys, ages 4 and 10, taken from her for months. They’ve finally been reunited in the US. The mom told me that every night her 4-year-old turns to her and says, “Mom, are they going to come and take me away again?”

I don’t know how people can look at a 4-year-old boy and think this is what we should be doing in America. Medical experts say that trauma is going to last a lifetime for this little boy. He is always going to feel traumatized and vulnerable that someone is going to do him harm.

Next: ‘They didn’t explore the world,’ says physician who cared for toddlers separated from their parents at the border