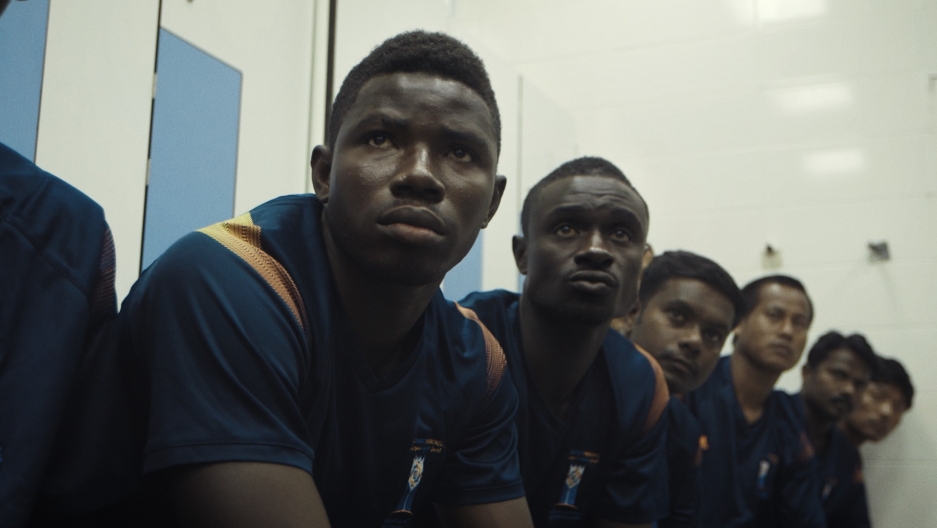 The team in the changing room before a big match. Left to right: Kenneth, David, Binumon, Purna, Umesh and Padam.

Courtesy of “The Workers Cup LLC”

Soccer is fun. Just ask the thousands of fans who are currently pouring into Russia to watch the 2018 FIFA World Cup games.

But the "beautiful game" also has its dark side.

One example is how the stadiums and venues for the sport come to be. In 2022, Qatar, a small country in the Persian Gulf, will host the World Cup games. And the rush to build new stadiums and other venues is well underway. Who builds these giant, glitzy structures? Migrant workers — men like Calton, a 30-year-old Kenyan who left his home in 2014 and came to Qatar in the hope of earning a better income.

Calton, who asked that I only use his first name because he fears retribution from his managers, is one of the characters in a new documentary called "The Workers Cup." The documentary, directed by Adam Sobel, tells the story of a group of workers involved in the construction of World Cup venues who were given the opportunity to play in a soccer tournament of their own. In 2013, the Qatari Supreme Committee for Delivery and Legacy announced a soccer tournament for the country's laborers. Twenty-four companies affiliated with World Cup projects put together teams that would compete against each other.

Calton works as a security guard on a construction site in Doha. He agreed to speak with me during his night shift. He said that's when the site is quiet and he can sit inside his kiosk.

Before moving to Qatar, the only impression Calton had of the Gulf country was from what showed up in his Google searches. "I saw that it's one of the richest countries in the world," he says. "It has one of the highest GDP per capita. I saw that people there drive flashy cars."

Meanwhile, Calton scraped by on money he made selling spare car parts in Kenya. Could a piece of the Qatari dream be his? He decided to give it a try. He paid an agent 60,000 Kenyan shillings (about $600), half of which he saved up and the other he had borrowed. Soon after, he was in Qatar. But not the Qatar of high-rises and flashy cars. This was life in a laborer's camps.

"The camp is very isolated," he says, "we are laborers, we are not rich, so we can't go mingling with the Qataris or whoever we want. There are rules. You cannot have an ID, ... you cannot change your jobs if you find a better opportunity. They take your passport, so you can't do anything." 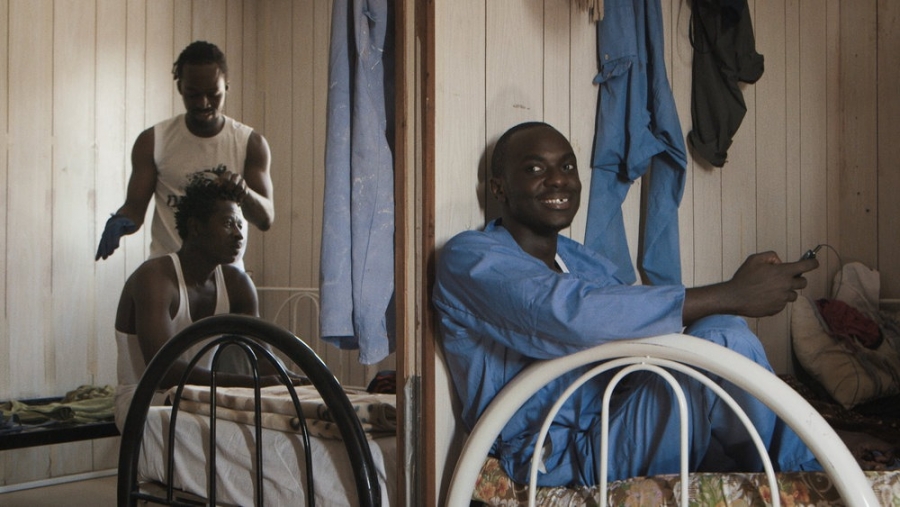 Calton (right) left his native Kenya to work in building structures for the World Cup in Qatar.

Qatar has for years been criticized for its treatment of migrant workers. A 2016 report by Amnesty International documented what Calton describes. And more.

The report said: "Amongst the most frequently reported problems facing migrant workers are: deceptive recruitment practices which see migrant workers promised more favourable conditions of work by recruiters in their home country than they are given on arrival in Qatar; employers compelling workers to live in squalid conditions; employers confiscating workers’ passports and denying them the exit visa they need to leave Qatar; late or non-payment of wages; and employers not giving workers proper identity documents, which leaves them exposed to arrest. In extreme, but not exceptional, cases migrants are subjected to forced labour."

Another report, this one by the Human Rights Watch, said: "Qatari labor law prohibits migrant workers from unionizing or engaging in strikes, although they make up 99 percent of the private sector workforce." In response to criticism, Qatar announced some changes to its laws. In 2014, the International Labor Organization dropped a case against Qatar after it promised to set a minimum wage for workers and allow them to leave the country without their employer's decision. But stories like Calton's suggest the changes are not yet fully implemented.

Meanwhile, Calton says he lives in a camp with "4,000-5,000 other men." Sometimes, he adds, there are up to eight men to a room. The food is not good and the summer heat is unbearable. (Summer in Qatar can be so hot that FIFA switched the 2022 World Cup games from late spring to winter.) He makes about $250 a month.

But most of all, Calton misses his wife and 6-year-old son. "I miss my family," he says. "I miss moving around. I miss adventure. In Africa you can just go to the woods and just take a nature walk."

Even if Calton was free to move around, he couldn't. In the past seven months, he has been working seven days a week. "If you request a sick leave, perhaps you could get a day off," he says, "but if you don't, sometimes you have to work throughout." He adds that workers are paid half pay for sick days.

It's in these conditions that the "Workers Cup" was announced. The men in Adam Sobel's documentary come from Nepal, Bangladesh, India, Ghana and Kenya. One of them, Kenneth, from Ghana, was promised by his recruiter that once in Qatar, he would be able to play for a soccer team. That turned out to be false.

Still, the 21-year-old sees the Workers Cup as a chance to show off his soccer skills to potential recruiters. His dreams were dashed when, after a couple of games, his team lost and was eliminated from the tournament.

Director Adam Sobel says he wanted to tell the story of these men as they are: multi-dimensional individuals.

"There is a tendency to look at migrant workers as victims or as a resource and nothing more than that," he explains. "Our goal was to celebrate workers for their goals, their hopes and their dreams and at the same time be critical of the situation."

Meanwhile, Calton thinks the Workers Cup was just a PR stunt by the Supreme Committee.

"They don't care about the workers. It's just so they can show off to the world that this is what they are doing for the workers," he explains. "Perhaps they should come visit the camps and see the conditions we live in."

He says he won't join a future tournament. "What if I get injured? Who's going to take care of me?" he asks. An injury would mean time away from work and less money to send back to his family in Kenya.

If he had really known what a worker's life in Qatar is like, Calton says, he wouldn't have come. Yet, he says, "this place ties you somehow. Now, if I go back, I would have to start from zero."

Sobel says that this system of labor in Qatar didn't start when the World Cup came to the country. "They've been under the same system for decades," he adds. "This system exists across the Gulf ... but nobody else is talking about the other countries because the World Cup happens to not be there."

The UAE, Saudi Arabia and other Gulf countries have all long benefited from cheap labor from African and Asian countries.