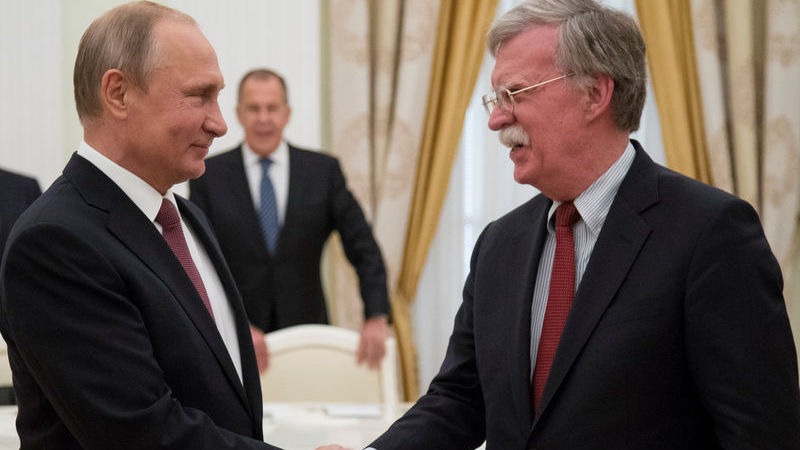 Moscow and Washington struck a deal on Wednesday to hold a summit soon between Russian President Vladimir Putin and US President Donald Trump, a move likely to worry some US allies and draw a fiery reaction from some of Trump's critics at home.

Kremlin foreign policy aide Yuri Ushakov, speaking after Putin met US National Security Adviser John Bolton in the Kremlin, said the summit would take place in a mutually convenient third country and that several more weeks were needed to prepare for it.

Such a summit is likely to irritate US allies who want to isolate Putin, such as Britain, or who are concerned about Trump's attitude towards Russia. It is also likely to go down badly among foreign and domestic critics who question Trump's commitment to NATO and fret over his desire to rebuild relations with Moscow even as Washington tightens sanctions.

Moscow and Washington will announce the time and place of the summit on Thursday.

Ushakov, who said the Kremlin was pleased with how Bolton's visit had gone, said Putin and Trump were likely to talk for several hours when they met and spoke of a possible joint declaration on improving US-Russia relations and international security.

The summit is expected to take place after Trump attends a NATO summit and visits Britain next month. A senior US official said on Tuesday that Finland's capital Helsinki was being considered as a location.

Bolton, a lifelong hawk who warned last year before his own appointment that Washington negotiated with Putin's Russia at its peril, robustly defended the summit.

"I don’t think it's anything unusual for President Trump and President Putin to meet," Bolton told a news conference, saying many European politicians had already met the Russian leader.

Trump congratulated Putin by phone in March after the Russian leader's landslide re-election victory and said the two would meet soon.

Since then, already poor ties between Washington and Moscow have deteriorated further over the conflict in Syria and the poisoning of a former Russian spy in Britain which sparked big diplomatic expulsions in both countries.

Washington and Moscow are also at odds over Ukraine and allegations of Russian interference in the 2016 US presidential election, something Russia denies.

Expectations for the outcome of any Putin-Trump summit are therefore low, even though Trump said before he was elected that he wanted to improve battered US-Russia ties.

A special prosecutor in the United States has indicted Russian firms and individuals for meddling in the presidential election to benefit Trump, and is investigating whether anyone in Trump's campaign helped the Russian effort. Trump denies wrongdoing and calls the investigation a "witch hunt."

Bolton dismissed the idea that the summit proved "a nexus" between the Trump campaign and the Kremlin as "nonsense."

Putin told Bolton on Wednesday that US-Russia relations were not "in the best shape," something he put down to domestic political tussling in the United States.

"But your visit to Moscow gives us hope that we can at least take the first steps to restore full-scale relations between our states," he said. "Russia never sought confrontation."

Bolton, who earlier on Wednesday complimented Putin on Russia's hosting of the soccer World Cup, told reporters he expected Moscow's meddling in US politics to be discussed at the summit, but that he did not rule out Trump discussing Russia rejoining the G7 to make it the G8 again.

Ushakov, the Kremlin aide, said that the subject of US sanctions on Russia had not come up on Wednesday and named four main summit themes: Strategic nuclear stability, the fight against international terrorism, regional issues like the Ukraine and Syria conflicts, and US-Russia ties.

The United States initially sanctioned Russia over its 2014 annexation of Ukraine's Crimea region and its backing for a pro-Russian uprising in eastern Ukraine. Subsequent sanctions have punished Moscow for what Washington has called its malign behavior and alleged meddling in US politics.

Some Trump critics say Russia has not significantly altered its behavior since 2014 and should therefore not be given the prestige that they believe a summit would confer.

When asked on Wednesday whether Trump would use the summit to tackle Putin on difficult issues, Bolton said the US president would raise a "full range of issues."

The US stance was that sanctions should remain in place and that Crimea should not be recognized as part of Russia, he added.

Bolton said he did not necessarily expect the summit to produce specific outcomes.

"I think the fact of the summit itself is a deliverable. I don’t exclude that they will reach concrete agreements, but there are a lot of issues to talk about."