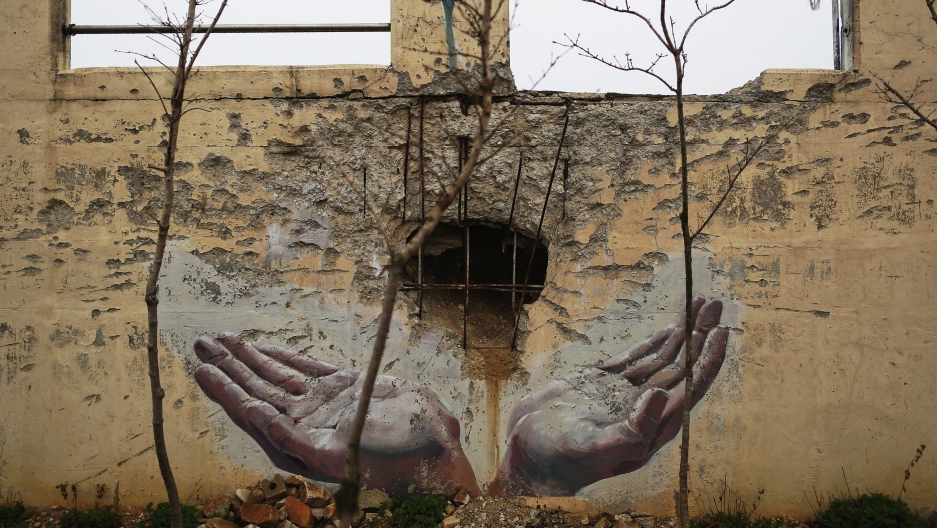 A painting is seen around the site where a shell landed during the 2010 North Korean attack on the island of Yeonpyeong, which lies on the South Korean side of the Northern Limit Line (NLL). In 2010 North Korea fired multiple shells onto the island killing four people, including two civilians, in a first such attack since the end of the 1950-53 Korean War. The two sides are still technically at war as the conflict ended in a mere truce, not a treaty.

Following the recent thaw in tensions that paved the way for historic summits between leaders of the US, South and North Korea, fear of prolonged hostility between the Koreas has been overshadowed by a renewed sense of hope.

Lee Cheong-yun experienced the war first-hand. He still remembers hearing the rising sound of machine gun fire, artillery explosions and the roar of tanks that signaled the ensuing siege of Seoul by North Korean forces.

He never imagined that, 68 years later, the Korean War would still be unresolved.

'I saw nothing but smoke'

At the start of the war Lee was a university student in the South Korean capital. He held out hope until the last moment that his country would somehow repel the invading army that had crossed, on June 25, 1950, what then served as the inter-Korean border. But as the clamor of war grew louder, like tens of thousands of other refugees, Lee too fled the city.

Now 89, Lee recalls when he reached Seoul’s bisecting Han River. He discovered there were no boats and the bridge had already been blown up by the retreating South Korean government.

“I wrapped up my clothing and swam across," he says.

Related: For many South Korean Christians, reunification with the North is a religious goal

Lee waited on the southern bank to see if the city would be liberated. It would not.

“I hoped I could return to Seoul in a couple days, but I saw nothing but smoke,” he says. It was then that he realized “North Korea meant business." So he continued to head south.

Lee would go on to serve as an interpreter in the US 1st Marine Division and participate in the Inchon landing as well as the disastrous Chosin Reservoir battle.

Millions of soldiers and civilians from both sides of the Korean peninsula lost their lives over the next three years until a ceasefire pact was signed, which has entrapped the two countries in a de facto state of war ever since.

Lee Cheong-yun escaped North Korea’s invading army at the outbreak of the Korean War and served as an interpreter in the US 1st Marine Division.
Credit:

Related: Identifying US soldier remains repatriated from North Korea may be challenging

The United States, which led United Nations forces against North Korean and Chinese militaries, lost over 36,000 soldiers during the conflict. The remains of several thousand Americans are still unaccounted for.

'Establishment of peace and joint prosperity'

In their respective post-summit declarations, presidents Donald Trump and Moon Jae-in and leader Kim Jong-un all pledged to work toward establishing a “peace regime” that includes the signing of a treaty to replace the often shaky armistice agreement.

And now efforts are underway to implement this pledge as well as other goals declared amid these summits.

Related: Negotiating with the North Koreans was never going to be easy

During previous commemorations of the outbreak of the Korean War, which is not a public holiday in South Korea, political leaders used the occasion to urge North Korea to abandon its nuclear weapons and to not test the nation’s resolve to defend itself.

But in a ceremony to honor veterans this week, Prime Minister Lee Nak-yon struck a more conciliatory tone, stating that his government is now moving toward the “establishment of peace and joint prosperity” with Pyongyang.

On Tuesday, officials from both Koreas met to discuss the potential integration of railway networks and more economic cooperation meetings are planned for the upcoming weeks. The two countries have also held high-level military talks and have set dates for the long-awaited resumption of reunions for families that have been divided since the early 1950s.

And over the weekend, North Korea also began handing over human remains to US forces in South Korea, which Pyongyang says are those of fallen American soldiers.

There’s concern that efforts to engage North Korea could lead to the downplaying of the Korean War, rendering it as a “forgotten war,” as its often referred to as in the United States.

“Among younger generations of South Koreans, knowledge of the war is pretty scant,” says the Seoul-based writer Andrew Salmon, author of two books on the Korean War.

Salmon explains that over the past two decades, South Korean history education became more nationalistic, which coincided with previous political attempts to foster better ties with the North. Now, greater attention is given to atrocities carried out by imperial Japan during the early 20th century than is to North Korea’s aggression during the war and in subsequent years.

He adds that despite the South Korean government’s announcement that it intends to declare a formal end to the war by the year’s end, there are still many differences to overcome — such as the need for Pyongyang to “accept responsibility” for starting the war and abandon its long-held stance that the US launched the initial invasion.

But while local polls show strong support for signing a peace treaty, Korean War veteran Lee Cheong-yun says he doubts that the “vague agreements” made during the summits will actually produce such a breakthrough. And even if they do, the results might leave his country worse-off.

He worries that the US might bargain away too much of its military presence, such as when the Trump administration cancelled joint military exercises with South Korea.

“When one power loses it strength, the other power will take over,” Lee says, adding that 68 years ago, it was this kind of imbalance that led to the Korean War in the first place.