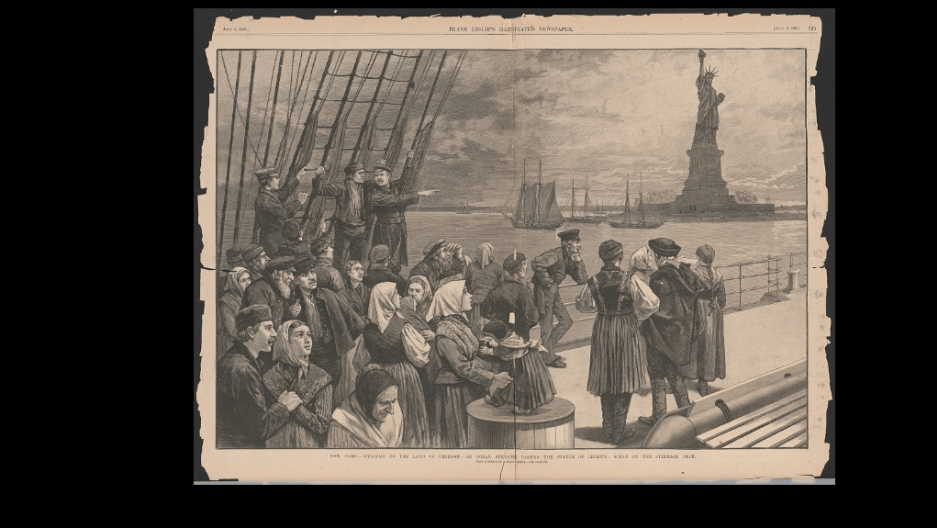 A sketch of an ocean steamer passing the Statue of Liberty in1887.

The Library of Congress

It might seem like America’s massive immigration system has always been around. But it hasn’t. Indeed, up until the early 20th century, our immigration system would have been barely recognizable to people familiar with the current system.

Katherine Benton-Cohen, author of Inventing the Immigration Problem: The Dillingham Commission and Its Legacy and an associate professor at Georgetown, says in the early days of the country, immigration wasn’t a federal matter at all. The states controlled it. And even when the federal government started to step in toward the tail end of the 19th century, it was relatively easy to immigrate to the US. (If you were migrating from anywhere other than China, that is. The Chinese Exclusion Act of 1882 almost completely halted Chinese immigration into the US until the mid-20th century.)

There were some exceptions: Criminals, paupers, “insane persons” and people with diseases could be turned away. But even if you had a disease, that wasn’t necessarily the end of it. “My husband’s grandfather was ill when he arrived from Eastern Europe,” Benton-Cohen points out. “And he stayed in a hospital on Ellis Island until he recovered and then he was released to his family.” She says that even though there was intense anxiety among immigrants about getting into America, the examination was about a minute long, and “something like 98 percent of people passed.”

All of this changed in the early 20th century. And one of the main reasons it changed was the Dillingham Commission.

The commission, formed in 1907 by Congress, was tasked with investigating the state of immigration and coming up with recommendations on how to improve the government’s approach. It included senators, congressmen, a fair number of social scientists and other experts. They worked until 1911 and came up with thousands of pages of reports and analyses. In the end, the commission concluded that immigration from Southern and Eastern Europe was a problem. And it offered recommendations.

“I like to say that the [Dillingham] Commission was one of the most successful commissions ever convened,” Benton-Cohen says. “Because almost all of its recommendations were turned into law, eventually.”

The Dillingham Commission had two major recommendations: A literacy test and a quota system. The quota system was a huge departure from previous policy. And though it took a while for the commission’s recommendations to become law, with the Emergency Quota Act of 1921, quotas became a centerpiece of America’s immigration system.

As to why the Dillingham Commission was so successful, it’s important to look at the context of the time. Benton-Cohen makes the point that, in the early 20th century, almost 15 percent of the American population was foreign-born.

These immigrants settled in large metropolitan cities like New York and Chicago, but also in smaller communities, from West Virginia mining towns to factory villages in the Hudson Valley.

"Old Stock Americans were confronting new kinds of neighbors,” Benton-Cohen says. Communities were changing, immigration was expanding, and that has some parallels to today.

After the quota system was established, followed by the Great Depression, the number of foreign-born Americans dropped drastically. It was around 5 percent by 1960. But by 2015, with the easing of the quota system and the Hart-Celler act of 1965, it rose again — to nearly 13 percent in 2010. We have nearly equaled the percentage of foreign-born Americans of a century ago.

However, there are differences between immigration in the early 20th century and today. For one, immigrants aren’t mostly coming by steamship from Europe. Far more are from Central America, coming via a variety of means including across the Southern border.

Also, a century ago, presidents were wary of publicly decrying immigration. “Presidents understood it was bad diplomacy to call immigration a problem, to target certain national groups that might anger our diplomatic allies or stir up trouble,” according to Benton-Cohen. “Presidents also did not want to anger constituents, many millions of whom were immigrants or their children.”

It’s a marked difference from where we are now. “If you want to contrast 2018 presidential rhetoric on immigration, you don’t have to go back to Obama or Bush or Carter, you can go to Grover Cleveland and what he said about this being a nation of immigrants ... it’s really quite moving,” Benton-Cohen says.