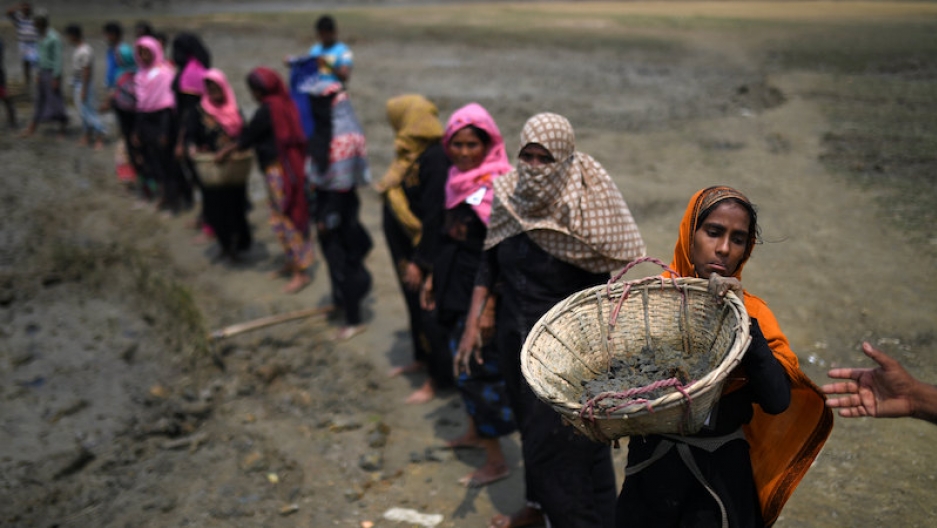 Rohingya refugee women carry baskets of dried out mud from the riverbed to help raise the ground level of the camp in preparation for monsoon season, in Shamlapur refugee camp in Cox's Bazaar, Bangladesh.

Some Rohingya refugees who fled from Myanmar are finding work in the fishing industry in neighboring Bangladesh, earning a tiny daily income and occasional share of the catch, all under the official radar.

The Shamlapur refugee camp, near a fishing colony on one of the world's longest beaches, is home to about 10,000 Rohingya refugees, aid groups say, many driven out of Myanmar's Rakhine State by sectarian violence last year.

Yosuf said he fled with his wife, Sobora Khatun, who was nine months' pregnant when they escaped after two months shackled in captivity. Their three-year-old son drowned in a river crossing, but baby daughter Rukia was born safely.

They are among nearly 700,000 Rohingya Muslims who fled a military crackdown, the United Nations and human rights groups say, almost all of them winding up in makeshift camps around the southern district of Cox's Bazar.

Although the refugees cannot work legally, some find jobs on fishing boats or help push them out to sea. The vessels are similar to the craft that carried thousands of Rohingya across the waters to Bangladesh.

Others in the camp earn money by shattering ice blocks to preserve the catch in the searing heat, mending nets or repairing boats.

Two in five Rohingya depend on a family member with an informal job in Shamlapur, while one in 20 rely on financial assistance from a family member abroad, a survey by migration research group the Xchange Foundation shows.

"Rohingyas in Shamlapur are mostly living in makeshift accommodation and are only occasionally engaged in (illegal and seasonal) gainful employment," the group said in March.

'A sword to my face'

Some Rohingya women have found work drying fish at a yard in nearby Nazirartek, for a daily take-home of $1.20 to $2.40.

"I was wounded by a sword to my face," said Hasina Begum, 30, describing how she fled her home.

"Then I lost consciousness and I was lying on the ground and some of my neighbors took me to the boat and we crossed the river to the Bangladesh border," said Hasina, who battles pain and memory difficulties after losing the sight of one eye.

She escaped from Kutupalong refugee camp to seek fish-drying work.

"Yes, it's a better life, as I can work here with drying fish and I can earn money," she added.

Spread over 200 acres, the fish-drying yards handle around 100 tons of fish every day of the peak drying season from September to May.

Here, under a blistering noon sun, a Rohingya woman toils over a long wooden table, sorting pungent clusters of fish while constantly swatting away flies and mosquitoes. Others tie up fish that had been draped over bamboo poles to dry.

Even the children work hard.

From dawn, they push boats into the water or join fishing trips to earn a small bag of fish they can swap for tamarind from canny beachside vendors who get the better of the deal, as the fish is prized above the sour flavoring the children enjoy.

Hakim Ali, 45, works on a salt pan on the edge of the Teknaf river dividing the two countries, carrying bags of salt for 12 cents each.

Ali said he left his home near the town of Buthidaung in Myanmar eight months ago, after rampaging mobs killed one of his brothers, threw another in jail and razed his home and paddy fields.

"We want justice and freedom of movement in Myanmar," Ali told Reuters, when asked what it would take for him to return.

"If the Myanmar government fulfills the demand, that day I will go."